The Asuras were power-seeking deities from Hindu mythology that were seen as the traditional enemies of the Devas (the Hindu gods) - while the Devas are almost universally accepted as divine and righteous in Hindu belief the Asura are often viewed as sinful, materialistic and demonic: happy to wage war on the Devas or anything else that may interfere with their own selfish goals.

In some ways the Asura may be seen as a parallel to the Greek Titans or Norse giants , being primordial deities that embody a more savage ruling style than the younger pantheon and as a result frequently antagonise them - however the Asura were seen as being equally prepared to attack humans as they were Devas and over time they became very similiar to the idea of demons in other religions (though they retained their status as deities).

Despite the great number of legends that have the Asura as antagonists they are, like all deities, not always seen as entirely evil and can be amoral or even benign in the minds of some - to some the Asura simply represent an alternative path (much like the concept of Mammon in Abrahamic religions).

According to some the main principles of the Asura were pride, arrogance, conceit, anger, harshness, and ignorance - which would certainly explain why they were often at odds with the Devas. 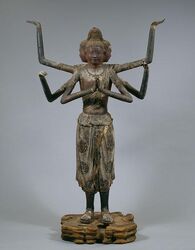 A statue of one of the Asuras.
Add a photo to this gallery

Retrieved from "https://villains.fandom.com/wiki/Asuras?oldid=3769959"
Community content is available under CC-BY-SA unless otherwise noted.