Disguise that enable them to blend into human society

The Aswang are vampire-like creatures who feast on human flesh in the 2013 Philippine TV Series Juan Dela Cruz. They are the enemy of the Tagabantay and the Kapatiran.

After the eventual deaths of their king and queen Peru-ha at the hands of Juan and his Tagabantay-Kapatiran alliance, a renegade Engkantada species (hybrid of a Lambana and a Baylan to be more precise) seized leadership over the Aswangs. The Sswangs were drafted into Peru-ha's military service whether they liked it or not.

All aswangs who fought with Peru-ha eventually died. It is unknown if the Aswang race was eradicated by Juan but it is likely that there are Aswangs still left, especially women and children.

The Aswang appears like ordinary humans but they can transform into purple-skinned hairy beast. They have superhuman strength, extremely fast and agile. They can also see in the dark and can jump at high heights. Their diet consists of human flesh.

In the human society

Through the guidance of their Haring Aswang, they have infiltrated almost all sectors of the human society, with the church as one the exception. Aswangs either carry or wear some sort of mystical black-gemmed jewelry to avoid detection by the Tagabantay. Their untransformed appearance also helped them blend in the human society. They get their food from the hospitals and funeral centers owned by their leader which lessened incidents of aswangs killing live humans for food. However with the shielding of Juan Dela Cruz, the Tagabantay by their own leader, increased these kind of incidents again so that the aswangs can feed their own families.

It is considered a taboo for an Aswang to fall in love with a human: when their Haring was found out that their own king had a son with a human, they began to distrust him. Laura was furious to find out that her son, Kael, was dating Rosario, a human woman.

They worshipped the goddess Saragnayan who promised the Aswangs victory, prosperity and dominance over the humans through the Anak ng Dilim. 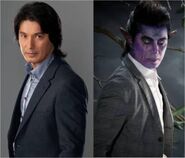 Retrieved from "https://villains.fandom.com/wiki/Aswangs_(Juan_Dela_Cruz)?oldid=3253907"
Community content is available under CC-BY-SA unless otherwise noted.