Villains Wiki
Register
Don't have an account?
Sign In
Advertisement
in: Corporations, Doctors and Scientists, Fantasy Villains,
and 28 more

The Asylum D'Loons (or Maison Des Lunes) is a supporting antagonistic faction in Disney's 30th full-length animated feature film Beauty and the Beast (which is based on the 1756 French fairytale of the same name by the late Jeanne-Marie Leprince de Beaumont), and its 2017 live-action remake of the same name. It is a mental institution run by Monsieur D'Arque who are in league with Gaston LeGume.

The Asylum was known to hold patients there are subjected to forms of abuse under the direction of D'Arque, who takes delight in it. When D'Arque was contacted by Gaston and LeFou, he paid a visit to them in Gaston's tavern, where Gaston revealed his plan to make Belle agree to marry him by exploiting her father's crazy ravings about an unnamed monster known as the Beast holding her prisoner in his castle. D'Arque was quite hesitant at first as he truthfully stated that Maurice was quite harmless in general (despite his claims). However, Gaston offered D'Arque a bag of gold to throw Maurice in the madhouse unless Belle agreed to marry him, to which D'Arque happily accepted. When they went to Belle's cottage to find out that neither Belle nor Maurice are there, Gaston had LeFou stay there on guard until Belle and Maurice returned.

When Belle and Maurice did come home, LeFou rushed to get Gaston and D'Arque, who both rallied up much of the villagers (including Tom, Dick, Stanley and Walter) for support. D'Arque himself appeared at Belle's doorstep and snidely promised her that they would "take good care" of Maurice, showing her the madhouse's carriage. D'Arque had his men carry Maurice to the carriage, despite Belle's protests. Gaston promised to have Maurice released if Belle would marry him, but Belle turned down Gaston's proposal again and managed to prove her father's sanity by proving the Beast's existence with the Magic Mirror, resulting in Maurice's release. It is unknown what happened to Asylum afterwards, though it can be implied that they had to move on since they have no case against Maurice as his sanity has been proven to the public.

The Asylum only played a minor role as it is left in question to believe whether it is involved of Gaston's plan to marry Belle or not, as D'Arque has not been shown to accept a bribe from Gaston to lock up Maurice.

D'Arque briefly appeared in the climax as he was taking Maurice to the Asylum under Gaston's orders. As it turns out, Gaston previously left Maurice to die in the woods after the latter refuses to let him marry Belle, and Maurice has returned after being rescued by the local beggar woman Agathe before accusing Gaston for attempted murder. To that end, Gaston plans to have Maurice detained in the asylum for his "silly" cravings about the Beast in order to cover his crime and blackmail Belle into marrying him. Fortunately, an arriving Belle foils this by using the Magic Mirror to prove the Beast's existence, which made D'Arque and the villagers realize that Maurice was telling the truth.

Despite this turn of events, Gaston (being jealous of Belle's relationship with the Beast and not wanting to be exposed of his crime) furiously steals the magic mirror and convinces the townsfolk that the Beast is a threat to the village that must be put down. As Gaston rallies the villagers to attack the Beast's castle, he angrily orders D'Arque to lock up both Belle and Maurice in the Asylum carriage and watch the two on guard until he and the villagers return after slaying the Beast. However, D'Arque is forced to move back from the carriage as the villagers march off to raid the Beast's castle, which buys Maurice enough time to release himself and Belle from the carriage by unlocking the padlock with Belle's hair pin. Maurice then stalled D'Arque enough time for Belle to ride back to the castle on horseback to save the Beast and the servants from Gaston and the villagers.

D'Arque bringing in the asylum carriage to detain Maurice. 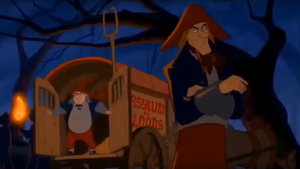 D'Arque summoning two of his thugs to get Maurice.