Enforce atheistic ideals on the town

Stop the celebration of Christmas.
Stop the Christmas bell from chiming (both failed).

The Atheist Mayor is the main antagonist of the Robot Chicken skit known as: "Humping Robot Saves Christmas".

He was voiced by Seth MacFarlane who also voices several characters in his own shows, such as Peter, Stewie and Brian Griffin in Family Guy.

The skit opens with the Mayor announcing that all the citizens need to go back to their homes, as he had shut down the church because he was the town's "Atheist Mayor." The citizens protested by reminding him that it was Christmas, to which he only replied they should have thought about that when they elected him as their atheist mayor. After asking if they could ring the Christmas chimes, he denied them, and revealed that he had removed the bell's chimes to keep it from chiming.

He then exited the scene, but not before reminding them to vote for him in the upcoming election. This is when the Humping Robot showed up in the town. He saw the bell on top of the church, and broke in so that he could hump it. His humping made the bell chime, which summoned the angels from heaven. They landed on top of buildings in the town, surrounding the mayor. He attempted to run, but they pulled out their guns and shot him to death. His blood hit the screen until it was completely red, which it then proceeded to show the message "Merry Christmas" In green text.

Physically, he appears to have tan skin, grey hair, and a mustache. He is wearing a white button-up undershirt, with a multi-colored vest, a dark blue coat and pair of pants, dark shoes, a black bow tie, and a black top-hat.

The Mayor appears to base his entire personality around being an Atheist. He is determined, doing everything in his power to stop the citizens from celebrating Christmas. He has shown a cowardly side, however, running away in fear once being confronted by the angels. 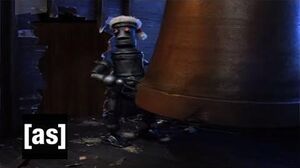 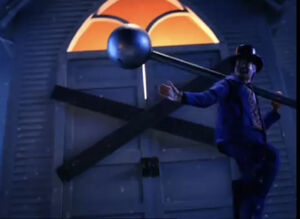 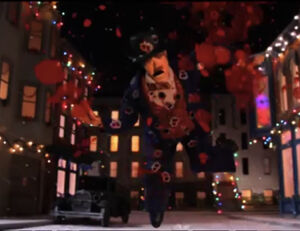