Greek Goddess of War and Wisdom

Athena is a major character of the God of War game series, serving as the deuteragonist-turned-final antagonist of the Greek Era. She also appears very briefly as an antagonizing illusion in God Of War (2018).

Role as a Villain

In most of the God of War games, Athena was the least selfish and most noble goddess. In the early games, she would help Kratos on his goals to save fellow Olympian god Helios, and stop her brother Ares. Before the events of the series, Athena saved Kratos' life from Ares' wrath, as they were sent to capture the marked warrior who would bring the end of the Greek pantheon. Athena apologized to Kratos before leaving, as Kratos would later remember this during the events of Ghost of Sparta.

Kratos eventually becomes fed up with the Gods and Athena during Ghost of Sparta, where he learns that his brother is alive. Athena attempted to stop Kratos from entering the place know as the Domain of Death, but failed as he killed Thanoatos, and lost his brother during the battle. In God of War II, she wants to stop Kratos from angering the Gods, and stop him from killing Zeus as revenge.

She returns at the end of the game, being killed by Kratos on accident. Athena reveals to Kratos that Zeus is Olympus, and that he is the Ghost of Sparta's father before dying. Despite her warning, Kratos declares that he has no father, and goes back in time to get the aid of the Olympians' ancient enemies, the Titans, and returns back to the present by declaring war against the Olympian God's themselves.

However, in God Of War III, she is consumed by madness, the inversion of her identity as the Goddess of Wisdom. She motivates Kratos in his quest for vengeance against Zeus. She did not show any of signs of evil while alive, possibly due to her selfless nature, with death allowing it to overwhelm her. She also claims to have a message for humanity, and presumably wanted to control them, and remold the world in her image.

In God of War III's ending, it can be assumed that what she actually wanted was to take the great power of Hope back, rebuild the world and rule over the mankind alone as the sole all-powerful deity. However, Kratos stopped her by committing suicide with the Blade of Olympus and let the Hope out, in order to save the corrupting world. Athena left with rage and disappointment, and left Kratos for dead by taking the blade from his stomach. Athena left as Kratos was on the ground, losing a lot of blood before going off the cliffs (as revealed at the end of the post-credits).

In God of War (2018), when Kratos traveled back to his home, Athena appears before him on the boat; the Spartan tells her to get out of his head, and she vanished. As Kratos once again arms himself with the Blades of Chaos, Athena appears again in front of his home door, taunting him for his futile attempts to escape the truth about himself; that he is and always will be a monster. Kratos admits that she is correct, but declares that he is not her monster anymore, walking through her and causing her to disappear again. At this point, Kratos has accepted that he is his own monster, and that he must be better, honest, and trusting towards his son. 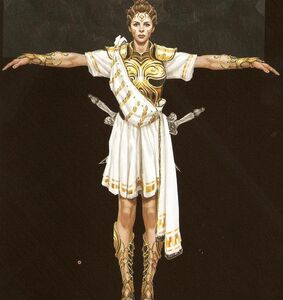 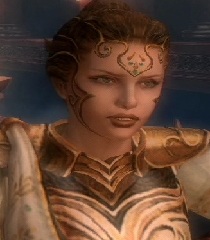 Athena in God of War II. 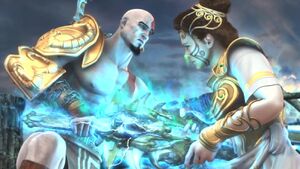 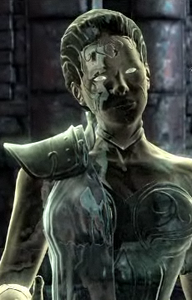 Athena in God Of War III. 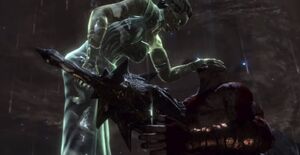 Athena before pulling the blade of Olympus out of Kratos' stomach. 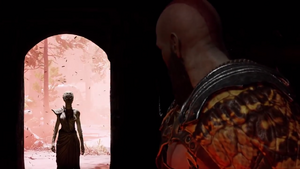 Athena taunting Kratos while he gets his blades.