Atlas is a boss from Dragon Quest II and a went to become a common recurring antagonist in th series. He is one of Hargon's most powerful minions, and one of the three guardians protecting his domain with the others being Pazuzu and Belial. He relies on his brute strength, but is not particularly difficult to defeat by a fairly leveled party.

Atlas appears as a giant, orange cyclops with a single horn wielding a massive club and wearing a ragged blue tunic. He is more or less a palette swap of the regular Cyclops enemy.

He is one of the mos powerful bosses at the end of the mysterious grottoes. His speech can lead to suggest he's one of Zenus' fragments but since it's never expanded upon, it is not known what he's supposed to be.

This titan sometimes patrols one of the ever-changing twisted corridors of the Dark World, where he can be scouted. He's also one of the monsters that the Champion Solitaire uses. 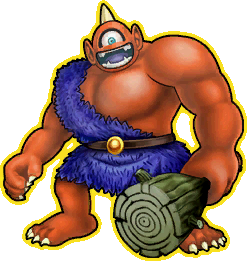 Retrieved from "https://villains.fandom.com/wiki/Atlas_(Dragon_Quest)?oldid=3479665"
Community content is available under CC-BY-SA unless otherwise noted.