Holding the world on his shoulders.

Aid Persephone with her goals ('God of War: Chains of Olympus, failed)

Aid Kratos with his goals (God of War 2, succeeded)
Kill the Gods of Olympus (failed).

Atlas is one of the many enemies that Kratos encounters on his journeys. He serves as the secondary antagonist and a part of the final boss with Persephone in God of War: Chains of Olympus, and a supporting character in God of War II.

Atlas is a titan and presumably one of the tallest. The most notable thing about Atlas is that he has four arms instead of two.

When Kratos encounters Atlas for the second time, he mentioned that during the Great War, Hades nearly ripped the soul out of Cronos, but Altas managed to rescue him. Despite him rescuing Cronos, Hades, with the help of Poseidon, manage to rip the soul of Atlas. After his soul was ripped out, Atlas was one of the first of the Titans to be imprisoned in the pits of Tartarus.

After Kratos completed the task of killing the Basilisk, he noticed that the sun has dropped from the sky. It turns out that Atlas somehow escaped from Tartarus and kidnapped Helios. As Kratos made his way throughout Tartarus, he eventually found out that someone freed Atlas intentionally. It turned out that Persephone was the one who let Atlas free, because she found out that he was the only one who could rip Helios out of the sky and use his power to destroy a pillar that, if destroyed, would collapse the world, destroying it, and the Underworld.

While Kratos was confronting Persephone, the goddess tried to distract Kratos by wrapping her wings around him, and telling him to be with his daughter. With that distraction, Persephone called forth Atlas to crush Kratos to death.

But Kratos managed to move out the way and managed to tie up Atlas' arms to the world, leaving him trapped.

After Persephone was killed, her death caused an explosion that destroyed part of the pillar where Atlas was trapped, leaving him to forever carry the world on his shoulders. Atlas asked Kratos if the gods would help him. He warned Kratos that they would meet again and that he will regret serving the Gods of Olympus.

Though Atlas does not appear in God of War, there is a trial inside Pandora's Temple called the Challenge of Atlas. When Kratos enters a chamber known as the Chamber of Atlas, he encounters a statue of Atlas (which looks nothing like the actual Titan of Endurance). Kratos notice that something was wrong, the giant iron ball that suppose to resemble the world is on the ground, instead on Atlas' shoulders. Kratos had to find the key which was known as the Handle of Atlas to wind the orb back into position. He does this by avoiding buzzsaws, climbing cliffs and a bunch of other dangerous obstacles. After he found the key and placed the world back where it belongs, he processed to pull a lever, which cause the statue to toss the orb onto the door behind Kratos, causing it to open the sealed door.

Years later, after Kratos killed Icarus and acquired his wings, he comes across Atlas, still holding the world on his shoulders. In order to reach the end of the Great Chasm, Kratos had to destroy Atlas' Chains of Torment to open a hole and climb out of the Great Chasm. After he reached and destroyed the Chains of Torment, this relieved part of Atlas' burden but got his attention in the process. The Titan was not pleased to see the mortal who put this punishment on him and tried to crush Kratos with his fingers, but fails. Kratos told Atlas that he now sought to destroy the gods for their betrayal and asked Atlas for his help to reach the Sisters of Fate.

Atlas is a titan, so he has great Physical Strength. He's probably one of the strongest beings since he's holding the entire world on his shoulders. It also seems that Atlas doesn't need to eat or sleep, because he's forever punished to hold the world on his shoulders and he never seems to physically look hungry or tired. And since Atlas is a titan, it's also likely that he's immortal. He is able to use magic related to the earth, and was able to grant the last of that power to Kratos. 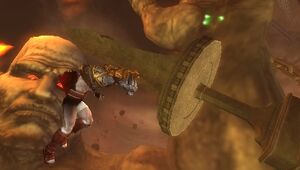 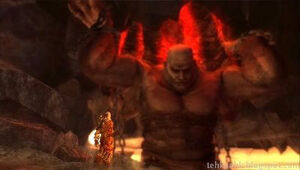 Atlas after Kratos chained his arms to the world. 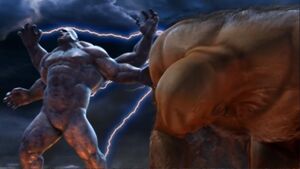 Atlas being attacked by Zeus. 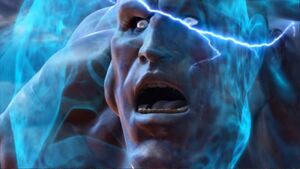 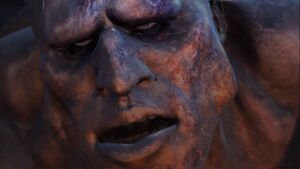 Atlas after his soul is taken from him.