Lieutenant of Kronos
Titan of Endurance
The General

One of the Titans

Get rid of the weight of the sky (failed).

Atlas (also called "The General") is the Titan of Endurance and Strength and Kronos' second-in-command. He is based of the Titan of the same name. His goal is to free himself of the weight of the sky on his back, which Zeus had forced him to hold.

He appeared as a major antagonist in the Percy Jackson and the Olympians book series by Rick Riordan.

As punishment for leading the armies of Kronos against him in the First Titanomachy, Zeus charged Atlas to hold the sky for all eternity. He is Kronos' second-in-command, and is in charge of recruiting monsters for the Titans' cause. Atlas is the main antagonist in The Titan's Curse, the third book in the Percy Jackson series.

Luke also serves him in the whole book. Atlas is Zoe Nightshade's father and kidnaps the hunt goddess Artemis so she can hold up the sky in his place. He also holds Annabeth prisoner and sends skeletal warriors and a monstrous lion after Percy and his buddies, but they manage to escape. Percy and his friends arrive at Mount Orthrys where they discover Annabeth and Artemis chained up. There is a huge fight, in which Atlas succeeds in killing his daughter Zoe, but Percy lifts up the sky and knocks Atlas underneath it, pinning him to the rocky ground. 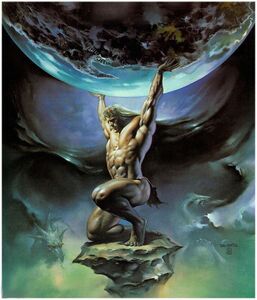