To win any competition.

To defeat Cyborg.
(both failed)

Atlas is a minor villain in the Teen Titans television series. He first appears as the main antagonist of the season 2 episode "Only Human". He later appears in season 5 where he acts as a minor antagonist. He resembles a giant robot with super strength and is a nemesis of Cyborg.

He was voiced by Keith David.

Atlas first appeared after Cyborg defeated him in a video game. Then he burst out of the video game screen and declared a rematch with Cyborg. After Atlas defeated Cyborg, he kidnapped the other Teen Titans, along with his minion, Spike. Later on, Robin convinced Spike to leave Atlas after the robot mistreated the minion harshly. Cyborg came to the rescue and once again battled Atlas, and defeated him once and for all. When Atlas asked for repairs, Spike furiously resigned from his service by saying "Do it yourself!".

Atlas later returned in season 5, as a minion of the Brotherhood of Evil. He was sent along with Adonis to fight and capture Pantha, but was defeated by her. He later returned in the final battle. He got one of his legs severed by Bushido and was not flash-frozen along with the other villains. What happened to him is unknown. 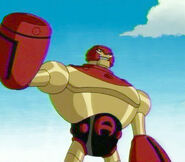