Amoral Criminal
Albert "Al" Rothstein or Atom-Smasher, as dubbed by Martin Stein, is a meta-human from Earth-2 and the parallel version of Earth-1's Al Rothstein, who was strangled by him.

He is portrayed by Adam Copeland.

Clearly an obvious difference between the histories of Atom-Smasher and his Earth-1 counterpart is that Atom-Smasher was in Central City when the particle accelerator exploded. It gave him the power to amplify his size using nuclear radiation. He became a criminal and had at least one in counter with Earth-2's Flash, Jay Garrick.

At some point, Atom-Smasher was told by Zoom that he would return back to Earth-2 if he managed to kill the Flash. After murdering his Earth 1 counterpart, he attempted to attack the Flash during "Flash Day", the parade held for Barry who saved the city. While Barry received the keys to the city, Atom-Smasher hurled a at the mayor who was saved by the Flash. Joe West and Cisco then attempted to defeat Atom-Smasher but only caused him to use his powers to double his size. He was then defeated by Barry and Joe when Barry threw explosive cans at him and Joe shot them. The explosion caused Atom-Smasher to lose his mask for a moment and Joe and Barry saw his face, puzzled how Rothstein could still be alive. This caused Rothstein to flee from the scene. The team was later able to pinpoint Atom-Smasher's location at a hazardous waste reclamation plant.

Arriving there, Barry was told by Atom-Smasher that he thought he had to search for Flash. Barry asked him why he killed and looked like Rothstein, but Atom-Smasher claimed that Barry wouldn't believe him. Barry then attacked Atom-Smasher but was grabbed by the throat and choked when Atom-Smasher grew his size. Atom-Smasher tried to kill Barry but was distracted by Cisco who activated the facility's fire alarms. Barry used this oppurtunity to escape and return to Star Labs.

The team for a final time caught his attention with a distress signal in the shape of lightning bolt. The idea came from Cisco who got it from a comic book. Barry lured him into a reactor core at a nuclear plant and Cisco activated the reactor. While Barry quickly escaped, Atom-Smasher was locked into the room and exposed to too much radiation for him to absorb. Mortally wounded, he fell to the ground. Barry entered the reactor to ask Rothstein why he tried to kill him. Rothstein revealed that Zoom told him that he could get home if he did, but died without revealing more. 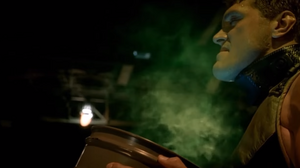 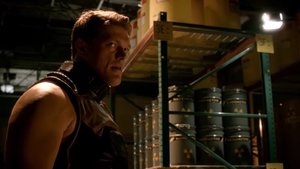 Atom-Smasher without his mask 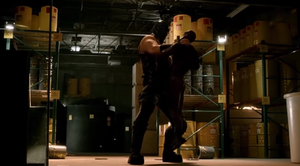 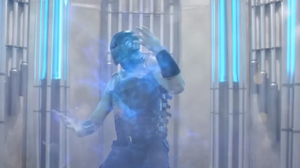