Supervillainous Mutant
Atomic Flounder is a minor antagonist from the world-famous Nickelodeon animated series, SpongeBob Squarepants. Back in the day, Atomic Flounder was one of the most heinous adversaries of Mermaid Man and Barnacle Boy, on par with Man Ray and the Dirty Bubble. He was a mutant flounder who would fight them and try to take over the world.

Currently, Atomic Flounder is retired, much like the two superheroes who used to face him and now lives as a kind and timid old man, who does no wrong and is actually friends with his former rivals. However, he is not entirely redeemed, as he can still snap back to his old self at any time, which he has done on occasion.

In his current state, he is voiced by Carlos Alazraqui. His younger self is voiced by Dee Bradley Baker who also voiced Klaus Heissler from American Dad.

Atomic Flounder is the result of a nuclear test experiment, which went horribly wrong, which is what turned him into the mutated domination he is now. During his youth, Atomic Founder would tangle with Mermaid Man and Barnacle Boy and give the duo horrible doses of radiation. He became horrible enough of a villain to be accepted as a member of The Bad Guy Club For Villains, working alongside many other villainous greats, such as Man Ray, The Dirty Bubble, Jumbo Shrimp, and Sinister Slug.

Decades later, Atomic Flounder would eventually retire from being a supervillain and give up his evil ways to live his twilight years in peace, not unlike Mermaid Man and Barnacle Boy.

SpongeBob beat up and assaulted the poor, defenseless old man without warning, leaving Atomic Flounder screaming for dear life. Mermaid Man and Barnacle Boy had to come in and stop him, telling SpongeBob that he is no longer a threat. After SpongeBob finally let up, Atomic Flounder yelled at Mermaid Man and Barnacle Boy, scolding them for allowing the little runt to attack him like that. He told them that if he wasn't retired he would use his radioactive belch on them to burn their flesh off. However, at the time he was saying this, he was so overcome by his rage, that he accidentally unleashed this exact power, incinerating Barnacle Boy's face to a crisp, before begrudgingly rummaging away in a huff.

Sinister Slug barfed a slimeball at Mermaid Man and Mermaid Man jumped out of the way, dodging it. The slimeball hit Atomic Flounder, getting him stuck to the ground. This led to Atomic Flounder becoming incapacitated and immobilized, making it impossible for him to fight.

Mermaid Man and Barnacle Boy finally rassled up The BGATFBC and pumped them for information on what they were all about. The BGATFBC revealed that their name stood for The Bad Guys All Together For Book Club and all they were doing was reading books. Atomic Flounder sarcastically asked them if they were going to imprison them for reading and Mermaid Man said that they would do no such thing and he let them go. 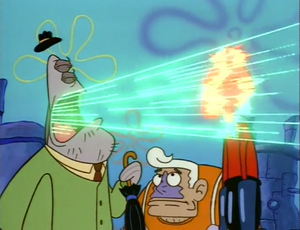 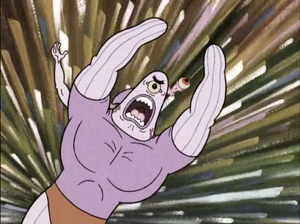 A young Atomic Flounder in action. 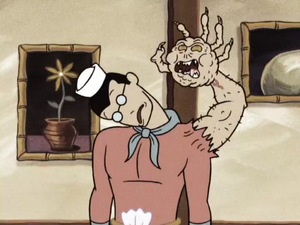 Barnacle Boy being possessed by an artificial limb, courtesy of Atomic Flounder. 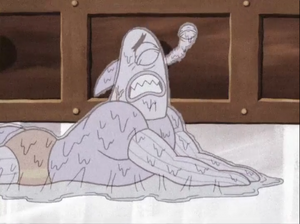 Atomic Flounder immobilized by the friendly fire of Sinister Slug.

Atomic Flounder in The Bad Guy Club For Villains.
Add a photo to this gallery

Retrieved from "https://villains.fandom.com/wiki/Atomic_Flounder?oldid=4180353"
Community content is available under CC-BY-SA unless otherwise noted.