Servant and henchman of Hugo Drax

Locate El Dorado so he can sell it as a weapon on the black market (failed).

Atoq Navarro is the main antagonist of the 2007 video game Uncharted: Drake's Fortune, the first installment of the Uncharted video game series.

He is an archaeologist who also leads a team of highly trained South American mercenaries. Throughout the game, he demonstrates knowledge of El Dorado, and betrays his boss Gabriel Roman to get the statue to sell to the highest bidder. He wears a brown vest, jeans, black leather shoes, and has a black beard and curly hair.

He was voiced by Robin Atkin Downes, who also voiced Talbot in the same series, and also voiced Travis Touchdown in the No More Heroes series, The Master in The Strain, Robert in The Last of Us, The Riddler in Telltale's Batman, and also played Doomsday in Batman vs. Superman: Dawn of Justice.

Atoq Navarro was found in a slum by Gabriel Roman, who took care of him and raised him. He serves a Roman's lieutenant throughout the events in Uncharted: Drake's Fortune. Both want to have the El Dorado statue. However, Gabriel Roman only wants the gold to compensate for money that Victor Sullivan owes him, while Atoq wants the treasure for his own agenda.

Atoq Navarro and Gabriel Roman first appear after Nathan Drake leaves the U-boat. The two men and their mercenaries are holding Victor Sullivan at gunpoint, they likely showed up when Sully's radio went out. Roman, angry at both of them, does not hesitate at all and aims his .38 revolver at Sully and fires. Due to Nate activating a torpedo, the u-boat explodes and knocks down all the men. Nate, looking back at Sully's body, thinking he is dead, runs into the jungle and bumps into Elena who gives him a gun.

Though never made into a real chapter, chapter 3 and a half was based on Atoq Navarro's large part of being a villain. Nate and Elena were sneaking into an airstrip to get back Sully's plane, the area was littered with Atoq Navarro's mercenaries. Stealth was an important way of fighting in this chapter. Nathan Drake followed a mountain path down to a hangar, once reaching it Nate had to fight a group of Atoq Navarro's mercenaries. Nate had to find a gun and blast barrels in order to kill all the mercenaries. After taking them out, Elena and Nate were firing there ways through the hangar to leave, once getting Sully's plane. Eventually, Navarro began firing at both of the adventurers, the only way to take out Navarro and his armored truck was to shoot at explosive barrels, toppling a telephone pole onto his truck. Elena and Nate then jump in the plane and fly away.

Atoq Navarro is seen in bunker when the Descendants are first encountered. He is seen through a window talking to Gabriel Roman holding the captive Elena Fisher. Roman then thanks Nate for leading him to the El Dorado and they leave. Nate is then attacked by Atoq Navarro's mercenaries. However, they are seen fighting the Descendants as well. Nate then leaves the bunker.

Lying in a deep hole, Nathan Drake, Victor Sullivan, Gabriel Roman and Atoq Navarro see the treasure. The mercenaries are also seen with everyone else. Navarro knowing the effects of the treasure, tells Gabriel Roman to open it. Roman opens it and transforms to a Descendant a few minutes later. Atoq Navarro then shoots Roman in the head, then a helicopter arrives and Atoq jumps in it and also ties a rope to the treasure. Descendants then crowd around the area and begin eating the corpses of the mercenaries. Elena also went with Nate and Sullivan. Nathan Drake arrives at the boat finally after shooting Atoq Navarro's pilot. The cargo ship is full of shipment and boxes. After killing Navarro's mercenaries, Nate reaches Navarro, who shoots a gas tank near Nate, causing him to lose his weapons, and opens fire with a automatic SAS-12. Nate manages to hide behind boxes while Navarro reloads, and soon gets close enough to engage him in a fist fight. After knocking Navarro unconscious, Nate is about to push the helicopter into the ocean, Atoq Navarro regains conscious and Nate sees the rope around Navarro's feet. He begins pushing the helicopter and El Dorado into the ocean, screaming and being dragged off the boat, Navarro sinks with the treasure and drowns, what happened to his body remains unknown. 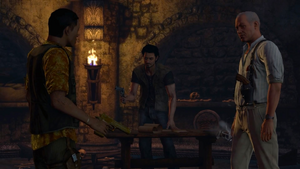