Leader of the Red Lantern Corps

Kill the Guardians for what their Manhunters did to his sector.

Atrocitus is one of the main antagonists of the DC cartoon Green Lantern: The Animated Series, being the main antagonist of the first half of the show. Like his mainstream counterpart, he is the leader of the Red Lantern Corps and the sole survivor of his sector after the Manhunters eliminated all other life in it.

He is voiced by Jonathan Adams, who was well-known for voicing several other villains, like Dormammu, Kang the Conqueror, Vaatu and Ronan the Accuser.

Following the loss of his sector to the Manhunters, Atrocitus' bottomless rage and hatred inspired him to create the first Red Lantern power battery. From there he went on to create the Red Lantern Corps, a deliberate twisted mirror image of the hated Guardian's Green Lantern Corps. However, Atrocitus soon became the very thing he so despised, callously destroying entire planets and on at least one occasion recruiting people into his Red Lantern Corps via trickery, deliberately starting a war on an innocent planet and killing its inhabitants simply because he saw potential in one of them as a Red Lantern (Razer). So it was that he murdered Razer's wife after inciting conflict on his homeworld.

A few years later, Atrocitus and his Red Lanterns (Razer among them) first came into contact with the Green Lantern Corps when they began killing Green Lanterns stationed in "Frontier Space", a place outside of Guardian Space where the Red Lanterns operated. However, after Atrocitus had an innocent planet obliterated simply for harboring Green Lanterns, a horrified and guilt-ridden Razer defected. He later attempted to kill Atrocitus on Shard but failed. During his time on Shard, Atrocitus revealed to Razer his part in his past tragedies. Enraged, Razer defeated Atrocitus and then stole his personal power battery, taking it as his own.

Atrocitus and his Red Lanterns later attempted to gain entry into Guardian Space via the Malestron, an asteroid belt separating it from Frontier Space. Atrocitus' own personal ship was able to get to Guardian Space ahead of his fleet, and using a reprogrammed Aya made his way to Oa on the Interceptor. Atrocitus confronted the Guardians with the intent to kill them at last, but Hal Jordan was able to arrive at that moment and though nearly beaten by the Red Lantern leader was at last able to turn the tide and defeat him. Afterwards Atrocitus was imprisoned.

Later however, after Aya's descent into madness and nihilism, she opted to see if Love was truly stronger than Hate by pitting Love's "champion" (a reluctant Carol Ferris) against Hate's champion, who just so happened to be Atrocitus. Though the brutal Red Lantern leader had little trouble overwhelming an inexperienced Carol Ferris, she was able to use the Star Sapphire's power of love to call in help from Hal Jordan. Together, the two were able to beat Atrocitus, who was then sent back to his cell on Oa by a disappointed Aya.

Atrocitus is a bulky and muscular male with a dark red skin color, with burn scars on his body. His most notable feature is his half burned face showing the right side of his gingiva. He has black lips, big-blockish teeth, two small horns on each side of his face, a small round nose and has yellow eyes. Atrocitus wore imposing Red Lantern battle armor, with large red boots, shoulder pads and gloves and has the Red Lantern symbol on his chest.

Unlike the more tragic, well-intentioned, and at times anti-heroic Atrocitus from the comics, this version is much more unambiguously monstrous and genocidal and in fact is the reason why his fellow Red Lantern Razer became a villain in the first place. Here he is more sadistic and murderous, and has no such regard for any innocent lives whatsoever killing people without a care.

He is a fascist and a hypocrite, driven by an uncompromising and relentless desire to exact his revenge on the Guardians of Oa for what their Manhunters did to his Sector, and holds the Green Lantern Corps equally guilty even though they knew nothing about the tragedy. As a result, Atrocitus is not only cruel but spiteful and vindictive, threatening innocent lives just to punish the Green Lanterns, and he cares nothing for his followers except for their usefulness and blind obedience. This was proven when Atrocitus shamelessly confessed to Razer that he (Atrocitus) is responsible for the wars and violence and deaths on Razer's homeworld, and that in order to push Razer over the edge Atrocitus personally murdered Razer's wife, Illana, and wickedly stated that Illana and what Razer felt for her didn't matter (to him) in the slightest and that he has no remorse for ruining Razer's life and deceiving him, all in order to make Razer into the perfect Red Lantern warrior for him to command. Not to mention, he brought war, death, and destruction to one world all just to produce a single Red Lantern.

While Atrocitus' rage and grievances with the Guardians are justified, his actions and methods are not. When Hal Jordan tried to reach out to Atrocitus, to try and convince the Red Lantern leader to change and work with them in the spirit of compromise and to rebuild what was lost, Atrocitus spitefully refused, choosing instead to take murderous revenge rather than work towards a solution to make things better, ultimately proving Atrocitus cares for no one but himself, and his claims of taking justice against those who'd wronged him and his sector are lies in that Atrocitus truly cares nothing about justice and only vengeance, and many of his crimes and actions are motivated by utter spite and sadistic cruelty. 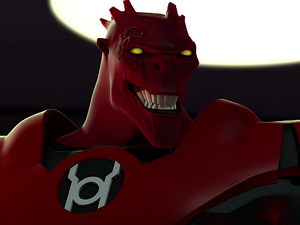 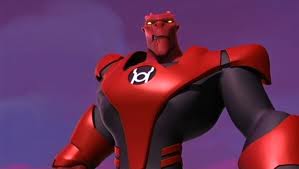 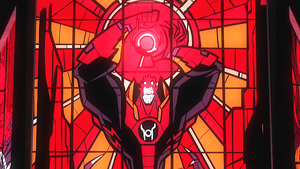 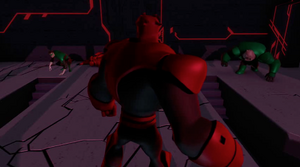 Atrocitus fights both Hal and Kilowog. 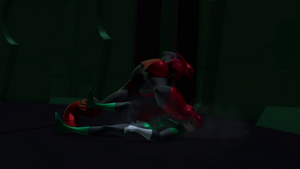 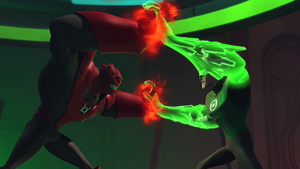 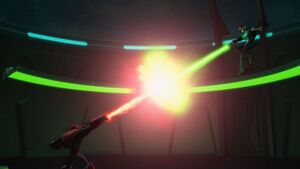 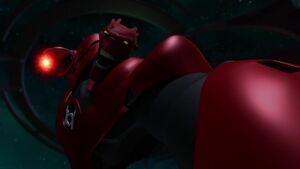 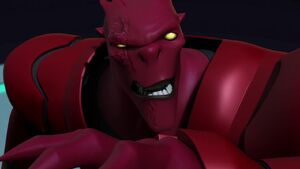 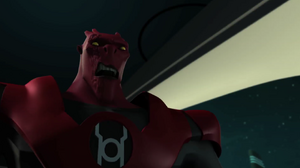 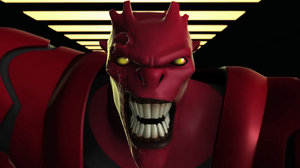 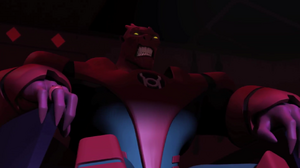 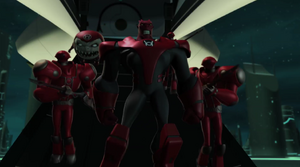 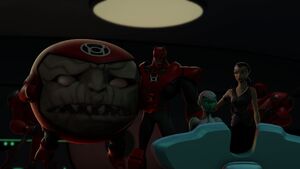