Villains Wiki
Register
Don't have an account?
Sign In
Advertisement
in: Mature, Female, God Of War Villains,
and 15 more
English

Goddess of the Future

Greek Goddess of the Future

One of the Sisters of Fate

Prevent Kratos from killing the Sisters of Fate and Zeus (failed).

Atropos is a major antagonist in the video game God of War II. She is the oldest of the Sisters of Fate and the "Goddess of the Future".

She was voiced by Debi Mae West, who also voiced Tisiphone in God of War: Ascension.

Atropos is the second tallest of the sisters. She wears dark vapor-like clothing and has razor sharp claws. She also has golden armor, and helmet, and long white hair.

After Lahkesis is defeated by the hands of Kratos for the first time, she calls forth her older sister; Atropos. While Lahkesis recooperates her injuries, Atropos fights Kratos on the day Kratos and Ares fought each other.

As Kratos and Atropos are engaged in battle, they both fight each other on the sword that Kratos used to kill Ares. Atropos attempts to damage the sword, and if the sword gets damaged enough, the sword would be destroyed, leaving Kratos vulnerable to Ares to kill him. Kratos has to deflect Atropos' energy attack to prevent her from destroying the sword, while also dealing with the creatures that are on the sword.

When Atropos gets close enough toward the sword, she attempts to electricute the sword, so Kratos has to fight Atropos to keep her away from the sword. After Kratos defeats Atropos by stabbing her in the head, and saves his past self from being killed, Kratos returns to the Loom of Fate to fight Lahkesis. Atropos survives, but is trapped in the mirrors.

After Atropos is defeated by Kratos, both she and Lahkesis team up fights Kratos for the second time. When Lahkesis gets knocked out, Kratos uses her ability to slow down time and attack Atropos. When Atropos gets knocked out the mirror she's stuck in cracks. Kratos then destroys the mirror before it can be repaired. Kratos does this one more time, and after he does it a second time, Lahkesis guard the third mirror. After Lahkesis is weaken by Kratos, Kratos then stabs Lahkesis with her own staff. He gets grabbed by Atropos, and as Lahkesis is about to stab Kratos, but Kratos manages to slip out of Atropos' grip, as Atropos gets stabbed by her sister. As Kratos pushes Lahkesis into the third mirror, the mirror becomes cracked and Kratos destroys the mirror, killing both her and Lahkesis. 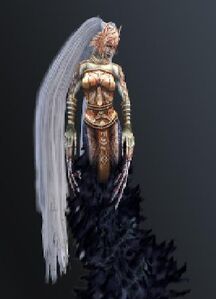