One of the 3 Fates

Agent of the Random/Higher Powers

Bring about the apocalypse.

Atropos is the secondary antagonist of the Stephen King novel Insomnia. An agent of "Higher Powers" assigned to kill people before they should die, he works with Clotho and Lachesis, his more peaceful accomplices. He is also the unseen overarching antagonist in Stephen King’s 1984 novel, Pet Semetary as he is responsible for Gage Creed’s death.

Like Clotho and Lachesis, Atropos is a being that is as old as humanity itself. However, as his workmates likely serve a more peaceful god, Atropos is a servant of the Crimson King, selecting people who will die suddenly - as a result of disasters, sickness, crime, and accidents.

Given a large list of people to kill by the Crimson King, he cuts the thread of life the second they cease living. Being an entity that lives across ages, he has a large effect on King's stories, ending such lives as Gage Creed and being active in extremely dangerous times, such as when Pennywise plagues the town of Derry.

The lives on Earth are called "short-timers" or "Shorts", referring to their relatively short lives. Anything that exists in higher dimensions are" long-timers,", and above them, "eternals," Being a personification of demise, he, Clotho, and Lachesis have influenced other gods of death like Thanatos, Baron Samedi, and Kali.

At the start of the novel, Susan Day goes to the town of Derry to deliver a speech about abortion, which she supports. However, the Crimson King selected her and a large mass of her followers to be killed in a massacre. For this he chose Ed Deepneau to commit the deed, as he visits him in a attempt to drive him mad.

The death deity also makes visits to other people, including Dorrance and Ralph Roberts. Ralph, the main protagonist, begins to suffer from insomnia and notice Clotho and Lachesis out on the street. He then goes to a higher plane to visit the two beings with Lois, a fellow insomniac. There, they learn their destiny.

Atropos continues to haunt Ralph, making him see auras around people and death-bags and bugs around people who will die soon. Ralph also notices that Atropos is wearing a friend's hat, a signal of their demise. The god then tries to kill a dog, but is stopped twice by Ralph before succeeding.

Ralph tracks Atropos down to his hideout after he steals some earrings from Lois. Ralph then cuts a deal with Atropos: if he gets back the earrings, everyone in the city is spared. Although he does agree, Atropos warns that he isn't fully responsible for what happens, noting that he would have to make a deal with a far tougher figure: the Crimson King. Ralph then slices Atropos' scalp, but doesn't kill him.

Swearing revenge, Atropos decides to end the lives of Ed's wife and daughter if Ralph doesn't save his victims. However, a fully insane Ed rams a plane into the confrence center, killing hundreds of people, including Susan Day. However, his fellow grim reapers, Clotho and Lachesis, also succeed in saving Patrick Danville, who is destined to save the world.

Atropos tries one last time to end Natalie's life by running her over, but Ralph, who made a deal with the other two gods to save her life at the cost of his, dies instead. Although he isn't living, the story ends on a good note, with Ralph being able to sleep in peace, and Atropos is left furious.

Atropos is a rather small figure, being roughly only three to four feet in height, having a bald head, and wearing a treachcoat, pants, and fairly large shoes.

A clever and barbaric figure, Atropos is rather mentally unwell, with his behavior switching from calm to extremely aggressive at times. He also has the power to transform into his latest hits, which he uses by taking the form of a recently killed girl. 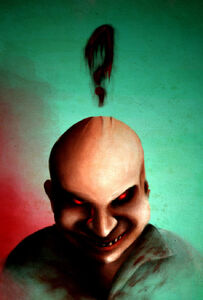 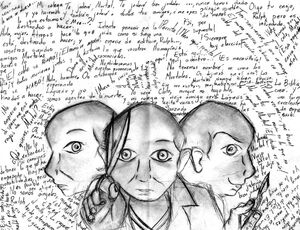 Atropos with his colleagues. 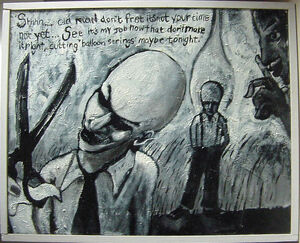 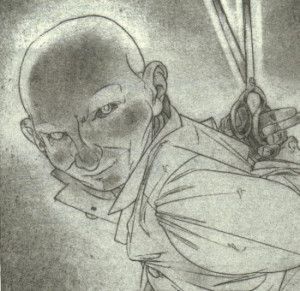 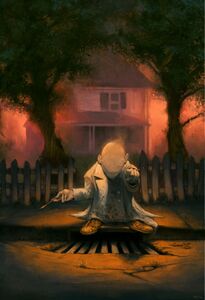 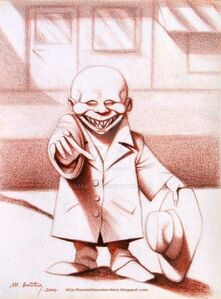