Attuma is a villain from Marvel Comics and the main antagonist of the Namor the Sub-Mariner series. He is the fahter of superherione Andromedia and the archenemy of Namor constaly trying to usurp him.

He was born into the tribe of Homo Mermanus who eschewed civilization to live as underwater nomadic barbarians. By some unrecorded method, Attuma was endowed with strength far surpassing that of his people. Nearing adulthood, Attuma learned of a prophecy, in the lost Atlantean Chronicles, of a conqueror who would take the empire of Atlantis by force. Believing himself to be that conqueror, Attuma moved to a position of leadership over his barbaric brethren, and launched an attack on the city of Atlantis and its ruler, Prince Namor, also known as the Sub-Mariner. He is Namor's archenemy.

Attuma appears as a boss and playable character in Lego Marvel Superheroes 2. He enlists the help of Torg the Yeti as he controls him with the pearl containing a Nexus Shard. As he is defeated in the end, Torg grabs him and swims him down to a school of jellyfish.

Attuma has appeared in various media such as in the TV shows and video games. 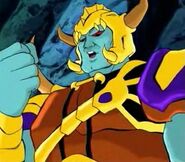 Attuma in The Avengers: United They Stand

Attuma in Fantastic Four: World's Greatest Heroes
Add a photo to this gallery

Retrieved from "https://villains.fandom.com/wiki/Attuma?oldid=4057448"
Community content is available under CC-BY-SA unless otherwise noted.