Aubrey, also known as The Bartender, is a minor antagonist in the top-down shooter video game Hotline Miami. A bartender who wears a pig mask, Aubrey is secretly an agent of 50 Blessings who seems to induct people into the organization on their orders for the purpose of carrying out 50 Blessings' terrorist attacks. He is the one who introduced Biker to the phone calls and, by extension, the masked killings.

Aubrey is a bartender assumed to be in his thirties. He has a brown buzzcut, a thick brown goatee, brown eyes, brown eyebrows and a prominent pink scar across his left hand eye. He wears a pig mask, a dark khaki jacket with what appears to be a red and white handkerchief in his breast pocket, black pants, a small white apron tucked into the front of his pants and a pair of brown shoes.

Nothing is known about Aubrey's past other than the fact that he works as a bartender in Miami. When 50 Blessings takes a stand against "Russian oppression" in America by using cryptic and threatening phone calls to coerce people into killing members of the Russian Mafia, Aubrey is one of the many people in Miami who joins the 50 Blessings terrorist conspiracy. Complying with the organization's orders, Aubrey is seemingly tasked with inducting people into the organization, at one point introducing a young man, Biker, to the phone calls to allow him to kill Russian mobsters, convincing him it would be fun. Due to owning a pig mask, it is implied that Aubrey himself may also be receiving phone calls, which possibly hints at him being experienced enough in combat to carry out 50 Blessings' hits on the Russian Mafia.

On May 13th, 1989, Biker grew bored of killing Russian mobsters on the callers' orders, skipped the mission to attack Hotel Blue and storms into Aubrey's bar. Looking to get to the bottom of the conspiracy, Biker grabs Aubrey by his collar and violently shakes him, demanding that he wants out and orders Aubrey to tell him how to stop the phone calls. After being thrown to the floor, Aubrey frantically asks Biker to calm down so he can explain himself. He tips Biker off about a man running a Chinese restauraunt known as the Blue Dragon, a technician working for 50 Blessings. According to Aubrey, the restaurant owner knows more about the phone calls than he does. Before Biker heads off to the Blue Dragon, Aubrey begs for Biker to not disclose his name to anyone about exposing intimate knowledge about 50 Blessings, fearing he is "as good as dead".

It is implied by Aubrey's last sentence that he may eventually be killed by 50 Blessings to buy his silence for revealing sensitive information about the organization. Had Aubrey survived being silenced by 50 Blessings, he may have likely died from the nuke dropped on Miami on December 28, 1991. 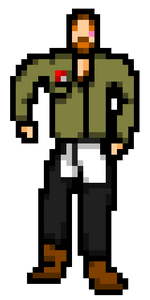 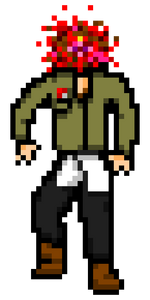 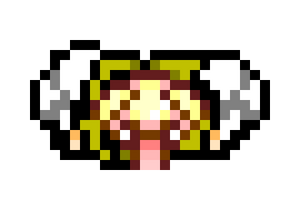 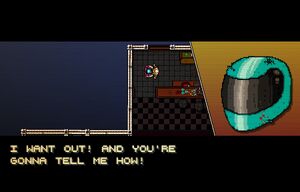 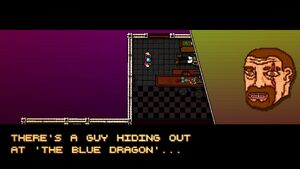 Aubrey informing Biker of a Chinese restaurant owner and technician who works for 50 Blessings.