Audrey II is a very cruel, greedy, uncaring, avaricious, manipulative and egotistical plant who relies on manipulating Seymour's desires to grow large enough to move around and eat humans on its own. Despite having no visible eyes or ears, it can still see and hear. When it goes to get to the telephone to call Audrey, it places the phone on the position of where the right ear on a human's face would be.

According to the film's director, Audrey II hails from a distant planet "Past the stars, and beyond the Moon!" which is home to thousands more carnivorous Plants akin to him. He came to planet Earth with the sole intentions of consuming humanity, and secondly to spread his seeds. (In the theatrical ending, he explodes and becomes blue particles. This could be taken to mean he regenerated into tiny seeds upon death, confirmed when an Audrey II bud is seen at the climax). Audrey II came to Earth during a total solar eclipse and this could be taken to either mean his spaceship was orbiting Earth at the time, and he teleported down as a sapling from the ship, or that it could mean his mere presence was enough so that he could bend reality to his will.

He ended up in the plant section of an exotic Asian florist and was sold to Seymour (despite the latter knowing the Plant definitely was not there before the eclipse) for just $1.95.

Seymour Krelborn is a very poor man who works in a flower shop. One day, he finds a very inexplicable and strange flytrap being sold by a Chinese man and buys it for $1.95. He names the plant Audrey II, after the girl he loves, and puts it on display in the flower store, which causes business to soar. However, it soon starts wilting and while trying to feed it Seymour discovers that the only thing the plant eats is human blood. He starts feeding the plant his own blood through his fingers until it is human-size and Seymour cannot afford to give anymore of his blood to it, at which point the plant starts talking and singing to Seymour demanding to be fed.

Audrey II convinces Seymour to kill Orin Scrivello, the opprobrious and abusive dentist that the human Audrey is currently dating and feed him to him, which Seymour does, being spared having to actually murder him as the dentist accidentally inhales a lethal amount of his own laughing gas. Later at night, Mr. Mushnik, the owner of the plant shop reveals that he witnessed the body being chopped up and pulling out his revolver gun tries to turn Seymour into the police but changes his mind and instead blackmails Seymour to leave town and hand over the fame and fortune that the plant promises, so that Mushnik become the new owner of the plant. Seymour reluctantly lures Mushnik into getting eaten by Audrey II to avoid getting shot at, and horridly watches a helpless Mushnik scream for mercy before getting swallowed whole.

At this point, the now massive plant is making Seymour a famous celebrity, but he is tormented by the guilt of indirectly killing two people and refuses to feed any more humans to Audrey II. A deleted scene ("The Meek Shall Inherit") would have shown that Seymour decided that having Audrey II around is far worse than his previous life back when he was broke and poor. Seymour grabs an axe and considers axing Audrey II but withdraws plans when he starts worrying that Audrey (the human one) will not love him anymore if he does not continue to earn all of the fortune the plant can offer him. Audrey II then says that it is hungry again, and wants another meal. But Seymour demands it only eat meat that is not human-like beef, making the plant throw a temper tantrum but then tells Seymour that it will take it. While Seymour goes to the local butcher for ground round beef, Audrey II drags himself a little across the floor to reach the cash register. He gets a quarter from the cash register and uses it to use the telephone and use it to call Audrey and lure her into the shop.

The film has two endings made each differing how Audrey II's fate goes on after this point. Only the "Seymour Triumphs" ending was shown back in theaters in 1986, but the "Audrey II Triumphs" ending earned its own theatrical release in a limited time event back in October 29, 2017 and October 31, 2017.

In the released film, Seymour rescues Audrey from the mouth of the plant before she is fatally wounded, and takes her out of the shop into a back alley where he is confronted by a salesman who tells him he will be selling mini Audrey II pods across the country, and has the contracts to do so whether Seymour approves or not. It is at this point that Seymour realizes what Audrey II's true intentions were all along, and he confronts the monster in the flower shop, where he starts singing the song "Mean Green Mother From Outer Space" and also reveals that he is, in fact, an alien from outer space, he, along with his newly-flowered offspring torment Seymour as he unsuccessfully tries to destroy him. At the end of the song, the plant yanks a support beam causing the building to collapse on Seymour. Believing Seymour is dead, Audrey II laughs victoriously. But Seymour survives and while Audrey II's guard is down he pulls out an electrical cord and plugs it into one of the vines, electrocuting Audrey II and causing him to explode. But when Audrey and Seymour ran into their house, an Audrey II bud is seen in their flower garden and smiles at the camera.

After Audrey is attacked by Audrey II (reprise of "Suppertime"), Seymour rescues Audrey, who is seriously injured. Confessing to Audrey he fed Mushnik and Orin to Audrey II, Audrey requests Seymour feed her to the plant and earn the success he deserves, before she dies in his arms (reprise of "Somewhere That's Green"). Seymour does so, but soon attempts to commit suicide, only to be stopped by a salesman, who offers to reproduce and sell Audrey II and presents him an Audrey II bud he had cut from the plant. He notices the bud from Audrey II grinning wickedly at him. Realizing Audrey II's intentions of world domination, Seymour rushes back to the store but before leaving the roof, he is warned by the salesman that his consent is unnecessary as plants are considered public domain, meaning Audrey II has to be destroyed. Returning to the shop, Seymour confronts and tries to kill the plant ("Mean Green Mother from Outer Space"), who tears down the shop, plucks Seymour out of the rubble, and eats him alive. He then spits out Seymour's damaged glasses and laughs victoriously.

The three chorus girls appear in front of the American flag and tell how the Audrey II buds became a worldwide consumer craze, but soon, grew into an army of monstrous plants who take over the world ("Don't Feed the Plants"). Giant Audrey II plants are shown destroying cities, toppling buildings, and eating people. The U.S. Army attempt to fight the Audrey II buds as the final shot shows the plants ascending the Statue of Liberty. One bud then smashes through the film screen and cackles as the camera zooms into his mouth. 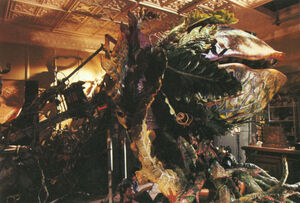 Audrey II. Note the construction machinery which enables the puppet to move. 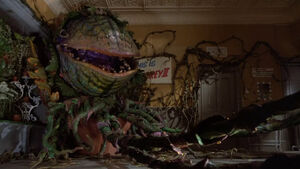 Audrey II drags itself to the shop phone, dark thoughts encroaching its mind. 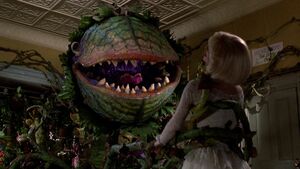 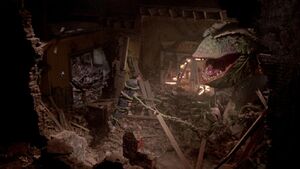 Audrey II devours Seymour in the original intended ending of the film. This scene disturbed people so much that they demanded a happy ending be contrived. 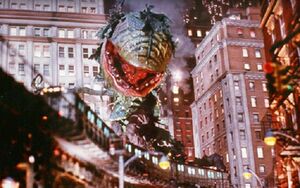 A massive Plant, even larger than the monster which devoured Seymour, ascends a train tracks in order to cause more chaos. 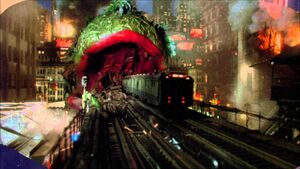 Audrey II monstrously devours an entire train and everyone inside. 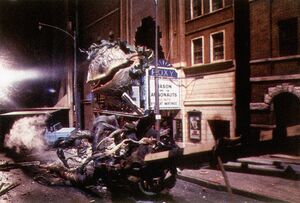 A Plant smashes out of a building, having recently devoured everybody inside. 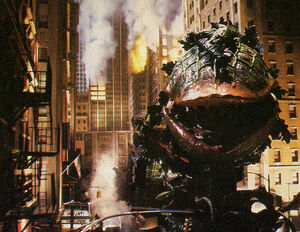 Look out! It's Audrey II! 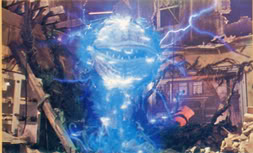 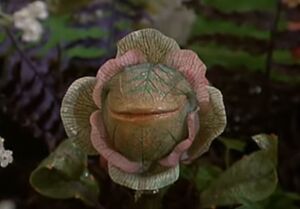 Audrey II "reborn" in the alternate ending.
Add a photo to this gallery 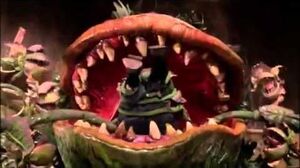 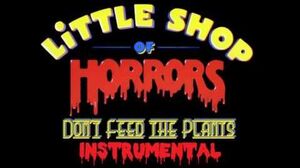 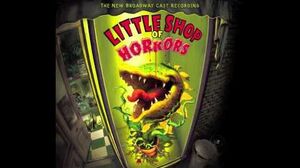 Suppertime 2003
The 2003 Broadway Edition of "Suppertime".
Add a photo to this gallery

Retrieved from "https://villains.fandom.com/wiki/Audrey_II?oldid=3482518"
Community content is available under CC-BY-SA unless otherwise noted.