Rule over all of humanity and kill all those who did not meet their standards.

The Augments were a group of humans from the Star Trek universe that had been genetically modified in mid 20th century.

The Augments were created by a group of rogue scientists as part of "Project Khan." Among the scientists who worked on the project was one Adam Soong. The Augments had been genetically modified to have greatly increased strength, stamina, durability, and intelligence. Unfortunately their superior abilities also gave many of them superior ambition as well, a diminished sense of morality, and a desire to conquer the Earth and rule over their fellow humans. Dr. Arik Soong later theorized that the genetic engineering had been defective, affecting the neurotransmitter levels in their brains.

In the 1990s a number of Augments seized power on over a third of the planet Earth, taking over 40 countries in the process. They were brutal tyrants who treated their subjects like slaves. One of the most prominent Augment leaders was Khan Noonien Singh. Khan and the other Augments went to war not only with each other, but with normal humans as well in a series of conflicts later called the Eugenics Wars. During this time Aegis agents Gary Seven and Roberta Lincoln worked with various people on Earth to help defeat Khan and the other Augments.

In 1996 the Augments had been defeated. Khan and about 80 of his followers disappeared and were unaccounted for. Not wanting the war weary population to know that there were some 80 potential Napoleons potentially running around, the governments kept this a secret. What actually happened was that Seven and Lincoln had stolen the top secret US DY-100 prototype and provided it to Khan and his followers, with the intention that they would relocate to a suitable planet 100 years away at impulse speeds. Khan accepted the offer, and after naming the ship S.S. Botany Bay he and the others were put in suspended animation, and sent on their way.

The spouses and children of vanquished Augments went to live in remote communities in areas such as Alaska. By the 23rd century their descendants had integrated into normal human society. (It was once theorized that William Riker's family descended from Augments families who had moved to Alaska after the wars).

Surviving Augment embryos were taken by the various governments, and frozen. The embryos eventually ended up on the United Earth Cold Station 12.

During the 22nd century the rogue scientist Arik Soong stole a number of embryos from Cold Station 12, and unfroze them so they would continue to develop. Unfortunately these augments turned out to be as violent and arrogant as their 20th century predecessors, and Soong was forced to help the Enterprise under Jonathan Archer hunt down and destroy them. After that experience Soong finally realized that it was folly to attempt to improve humanity through eugenics, and focused his remaining years on developing artificial life.

The Klingons were able to fish some more Augment embryos out of the wreckage of the ship the Augments had taken. Using the DNA from these embryos they tried to create their own Augments, but instead caused a deadly disease to spread throughout the Empire. By the time Dr. Phlox helped Klingon scientists cure the disease, millions of Klingons had been altered at a genetic level, and forced to live with a more human appearance.

Khan resurfaced in the mid 2260s when the Botany Bay was discovered adrift by the Enterprise, under the command of Captain James T. Kirk. Khan attempted to take control of the Enterprise, but failed in his attempt. He and his fellow Augments were sentenced to exile on Ceti Alpha V.

Six months after the Enterprise crew left them on Ceti Alpha V, Ceti Alpha VI exploded and caused severe damage to Ceti Alpha V. Khan's wife was one of the many casualties that resulted from the upheavals that resulted. When the USS Reliant visited to determine if the planet - which they mistakenly believed to be Ceti Alpha VI - was suitable for use as a test for the Genesis Device, Khan and his people were able to hijack the Reliant and confronted Kirk while he was overseeing a training cruise.

Khan and his crew were defeated by the Enterprise, and both Khan and his crew died a short time later. In a final act of vengeance, Khan detonated the Genesis Device, which would have destroyed the Enterprise had not Spock sacrifice his own life to fix the warp engines on the Enterprise to enable the ship to warp away before the device exploded. This marked the end of the last large scale Augment crew still surviving.

Khan and his crew had not been the only Augments to escape Earth following the war. Another group was discovered in the 23rd century, but was taken in for rehabilitation before they could do much damage.

Because of all the trouble that the Augments caused, United Earth had banned genetic engineering except to correct birth defects. This ban was adopted by the Federation soon after its formation. Individuals that were found to have been genetically enhanced were forbidden from practicing medicine or serving in Starfleet.

Julian Bashir was one such individual, but Starfleet allowed him to keep his commission and medical license after his father went to Starfleet and admitted his crimes.

Despite this prohibition some parents had their children illegally modified. While some like Bashir were able to function in normal society due to being treated by scientists who had the knowledge and tools to properly re sequence their genes, others were not so fortunate as their parents took them to scientists who lacked in either the proper medical knowledge or tools to do the job properly. Such children often suffered from severe medical issues - both physical and mental - and had to be institutionalized once what their parents had done to them came out. 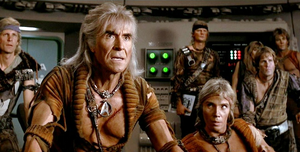