Abusing animals that fail his standards.
Obsessing over his wife.

Maintain his control over the circus.

August Rosenbluth is the secondary antagonist of the 2006 historical novel Water for Elephants by Sara Gruen, and the main antagonist of its 2011 film adaptation of the same name. He is the charismatic, yet abusive and neglectful animal trainer of the Benzini Bros. circus.

In the film, he was portrayed by Christoph Waltz, who also portrayed Walter Keane in Big Eyes, Léon Rom in The Legend of Tarzan, Mandrake in Epic, Hans Landa in Inglorious Bastards, and Ernst Stavro Blofeld in Spectre.

August is the head animal trainer of the Benzini Bros. circus, a circus that tours around America in the 1930s. Some time ago, he joined the circus and married Marlena, one of the top performers. Their relationship is not very positive as he is very possessive of her. He also consistently mistreats the animals, particularly the elephant Rosie, as he tends to tie her to a stake and whip her for failing his instructions.

When Jacob Jankowski runs away and joins the circus to become the veterinarian, August notices a relationship building between Jacob and Marlena. He harasses Jacob, threatening him to stay away from his wife. Uncle Al, the owner of the circus, informs Jacob about August suffering from schizophrenia and orders him to keep August and Marlena together or else Jacob's friends Walter and Camel will be "red-lighted" (thrown off the moving circus train).

A few days later, after seeing August trying to enter Marlena's room in a hotel, Jacob comforts Marlena resulting in them expressing their feelings for each other and make love. Eventually Marlena discovers she's pregnant and refuses to let August near her, enraging Al. Al informs August about suspecting Jacob's involvement and the two plan to get rid of him. That night, Jacob climbs on top of the train and sneaks into August's room to kill him. He backs out when he sees August and Al abusing Marlena for Jacob's location, leaving his knife on August's pillow. When he returns to his car, he finds it empty other than Walter's dog Queenie, realizing that Walter and Camel have been red-lighted.

In the climax, workers who were previously red-lighted before return for vengeance and release the animals during a performance. During the panic, Jacob witnesses Rosie smacking her stake on August's head. He is then trampled to death by the stampede.

Because Uncle Al does not appear in the film adaptation, August is made into both the animal trainer and ringmaster of the Benzini Bros. circus.

When Jacob arrives on the circus train, August hires Jacob to be a vet, primarily to help Silver, the head horse, and his case of laminitis. August instructs Jacob to fix Silver and keep him performing as long as possible. Jacob is ultimately unable to cure Silver and euthanizes the horse to put him out of his misery. August is displeased in Jacob's decision and threatens to throw him off the train if he fails him again. Jacob asks August why he is so determined to keep the animals working despite their conditions, to which August replies that an animal's suffering is not as severe as a man's.

August then instructs Jacob to tend to Rosie, an elephant that August tends to harass with a bullhook due to her being unable to train properly. One night, August invites Jacob to his car for dinner, and as Jacob watches August dance with Marlena, he could tell that he is abusively possessive of her.

After Jacob discovers that Rosie only understands Polish commands, the circus becomes popular again. As Jacob continues to work for August to train Rosie, August notices that Jacob and Marlena are spending more time together and worries that Jacob might steal Marlena or her wealth with him. August then cruelly taunts Jacob, such as forcing him to kiss Marlena in front of him.

The night before Rosie's big performance, Marlena eavesdrops on August and his men discussing their plan to toss Jacob from the train as it crosses a bridge, or as August states it, "red-lighting". Despite Jacob convincing Marlena to run away with him and hide out in a hotel, August's henchmen track down the two and take away Marlena while Jacob is severely beaten.

When Jacob manages to make it back to the circus, he learns that his friends Walter and Camel were red-lighted by August in his place. In anger, he rallies several of the circus employees fed with August's cruelties to unlock all of the animals' cages during the live show. During the panic, August attacks Jacob, turning his fury on Marlena when she tries to stop him. Rosie, having enough of August's abuse, comes to Marlena's aid and smacks an iron stake against August's head, killing him. Only Jacob witnessed Rosie murder August.

At first, August appears to be a kind and helpful man who helps his employees and animals of his circus perform excellently. However, this is only a façade to his true nature, a mentally unstable psychopath who forces harsh limits on what he can and cannot make his circus achieve. August is also extremely abusive both to his coworkers and the animals of the circus, severely punishing them if anyone of them disappoints him. He finds animal suffering insignificant compared to a man's. It is also believed that he only married Marleena for her wealth and not actual love. 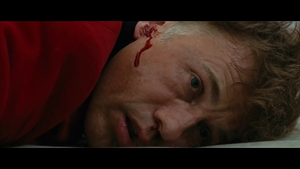