Leader of the Apostles and master spy

Keep Hunt under his watch.
Contact the former members of the Syndicate to rebuild the organization under the name of "the Apostles".
Rescue Solomon Lane from prison.
Get access to plutonium (all succeeded).
Detonate nuclear bombs in Kashmir in order to contaminate the water supply of Pakistan, India, and China that would starve a third of the world's population.
Create a new world order and to get world powers to finally work together.
Kill Hunt and his colleagues, and escape justice (all failed).

August Walker, also known as John Lark, is one of the two main antagonists (along with Solomon Lane) in the 2018 blockbuster action-thriller film Mission: Impossible – Fallout.

He is a corrupt C.I.A. agent who became one of the leaders of the Apostles in order to create a new world order through the means of anarchy and genocide.

He was portrayed by Henry Cavill in his first villainous role.

Although Walker's early life is never discussed, his years of C.I.A. involvement are vaguely brought up. Walker has been mistreated by his government multiple times, which ultimately led to Walker being driven to the edge, thus creating The Apostles to "save" the world.

Walker is a C.I.A. operative who at first appears as a slightly cocky yet professional man who is ordered to keep an eye on Ethan Hunt and follow his every step due to the fact that he might very well go rogue, but ironically Walker is the one who has already done exactly that. While working as a C.I.A. operative, Walker partners with the remnants of the organization the I.M.F. dismantled in Rogue Nation, The Syndicate, known as the "The Apostles". Working with the Apostles, Walker intends to rescue Lane and acquire two plutonium cores to be used in nuclear attacks that would wipe out a third of the world's population.

C.I.A. Director Erica Sloane meets with Alan Hunley after Hunt loses the plutonium cores in Berlin, and she sends Walker to watch Hunt and the I.M.F., suspecting that the I.M.F. will go rogue in a near future. Walker and Hunt go on a plane to skydive into a concert in Paris, capture John Lark and, assuming Lark's identity with a mask, make a deal with the weapons dealer known as White Widow. As they are skydiving, Walker dives early and is struck by lightning, but is saved by Hunt. Once they arrive, they find "John Lark" and try to incapacitate him so that they can scan his face to make a mask, but are beaten and nearly killed thanks to Lark's fighting prowess. Lark is however killed when Ilsa Faust intervenes, forcing Hunt to pretend to be John Lark, without a mask, in order to acquire the plutonium cores from the White Widow. The Widow demands that Lane be given to her in exchange for the plutonium cores.

Hunt, Walker and the rest of the IMF capture Lane. However, Faust intervenes again and attempts to assassinate Lane, shooting at the car Hunt, Walker and the team are in. The team is able to evade Faust. It is later revealed that if she does not kill Lane, MI6 will maintain her status as a fugitive and she will be regarded as much of a threat as Lane.

While they are interrogating Lane, he gives a speech about Lane and how he will destroy his life, with Walker looking more annoyed than anything, a possible foreshadowing of Walker actually being the true John Lark who is cooperating with Lane and being frustrated at Lane's personal vendetta against Hunt.

The team apparently decides to disguise Benji as Lane before being handed over to the Widow, leaving Walker to guard the real "Lane" at the safe house. As Hunt and the team depart, Walker releases Lane, revealing himself to be the real John Lark. Lane however refuses to proceed with Walker's plan and intends to stay at the safe house to deal with Hunt. Walker starts shouting at Lane for "making things so f**king complicated". While they are arguing, Walker recalls Sloane's remarks that the I.M.F. are "nothing but grown men wearing masks" and realizes that it was Benji he was talking to all along, Preparing to beat up Benji, Hunley arrives and along with Benji hold Walker at gunpoint. Walker is brought to Hunt and the rest of the team, who have had the real Lane with them all this time. Walker appears to be calm, and lies by saying that he is just "undercover" and that Hunt is delusional. Sloane, who had been listening in on the confrontation through Hunley's phone, confirms that Walker had been trying to frame Hunt as the real John Lark from the very beginning. Despite this, Sloane sends a C.I.A. team to capture Walker, Hunt and the rest of the IMF team.

The C.I.A. team had been infiltrated by the Apostles however, and on Walker's command open fire on the I.M.F. team. During the ensuing shootout, Hunley tries to stop Walker, who stabs him repeatedly and kills him.

Walker calmly walks away from the room using the shootout as a distraction, but Hunt eventually starts chasing him. Walker manages to out walk him however, as no one can out walk a man named Walker, and takes the elevator up to the roof of a building with Hunt hanging onto the bottom of the elevator. Walker calmly provokes Hunt as ge reveals that he knows that his ex-wife Julia is alive by putting a picture of her in front of him by, and threatens to kill Julia if he doesn't turn himself in and admits himself to be John Lark. He boards a helicopter with Lane bound for Kashmir. Walker's true goal is also revealed; the plutonium he and Lane has collected will be detonated in Kashmir, contaminating the water supply of Pakistan, India and China and ultimately killing a third of the world's population, so that the world powers will work together and the dread will eventually cause peace due to how much fear it has spread and the world powers finally coming together to fix something.

In Kashmir, Lane sets the bomb on, giving Walker 15 minutes to leave the blast radius via helicopter. Lane intends to stay with the bomb, having become a nihilist after being imprisoned and endlessly interrogated for years. Hunt arrives just as Walker's helicopter takes off. He grabs onto a second helicopter and assumes control. Hunt initially tries to bring down Walker by dropping his helicopter's payload on top of Walker's aircraft, but he misses. Walker grabs a machine gun and starts shooting at Hunt, until he runs out of ammo and Hunt is able to ram Walker out of the sky.

Having crashed onto a mountain, a fuel line on Walker's helicopter breaks lose spraying hot oil on Walker's face, partially disfiguring him.

Hunt and Walker start in a rageful fight at the top of the mountain,while one of the crashed helicopters dangles through a hook onto the cliff. Hunt desperately tries to grab the detonator as Walker grabs him and tries to choke him as Hunt knocks himself and Walker out of the cliff, though they manage to grab onto the rope still attached to the helicopter below. Hunt grabs onto the cliff and as he he just about had enough of Walker, knowing he won't give up, he ragefully pulls the rope down, loosening the hook which impales Walker straight into his face, finally killing and defeating him. Walker's corpse and the rest of the helicopter then fall down the mountainside where they both disappear in a fiery explosion below. Ethan Hunt would later stop the detonator's countdown, allowing both Luther and Ilsa to cut the wire with only a second to spare, leaving Walker's plan in vain.

Walker is surprisingly polite and friendly for a feared C.I.A. assassin, so feared in fact that Hunley is apparently aware of Walker's reputation before they met. This is demonstrated in the bathroom fight scene, where Hunt and Walker fight a fake John Lark, and Walker brutally throws the man around the room without barely any effort. As mentioned above, aside from being surprisingly gentle, Walker is also well-intentioned in all of his goals. His reason for wanting to cause a massive, world-destroying, nearly homicidal terrorist attack is because he wants to see the world finally coming together to help each other in stopping the attacks, which will finally bring peace, or at least he thinks so. It is shown multiple times before he is revealed as Lark that Walker actually seems to agree with Lark's theory, which also proves that Walker isn't doing it for fun as Lane is, but because he genuinely wants peace, which is similar to another villain in the franchise. Yet Walker is also very cocky, which kind of comes with the job. Walker seems to enjoy fighting people, once again shown in the bathroom fight scene where he looks like he's enjoying wrecking the man.

Walker, like Nils Delbruuk, also seems to be extremely anti-religious; based on the fact that in the second half of his Manifesto he blames religion as being one of the major causes for the world's problems and sufferings.

Walker is also shown to be highly manipulative, being able to manipulate everyone into thinking that he was merely trying to help the I.M.F. when in reality he was manipulating them for his own gain all along. This could very well qualify Walker as a sociopath, due to having facades he smoothly uses to fit into the crowd, combined with other factors such as his disregard for human life, killing Hunley simply because he happened to be in the way when Walker was rescuing Lane. Another sociopathic tendency Walker has is his lack of empathy, as, despite having gotten to know the I.M.F. and getting a somewhat friendly relationship with them, Walker has no problems betraying them and feeling nothing as he does that. Walker is shown to be easily angered when in stress, as he is trying to kill Hunt at the film's climax, he screams "WHY WON'T YOU DIE". Walker is shown being protective of his associates, especially his partner Solomon Lane, who he protects at all costs during the climax when he rescues him from prison, killing anyone who gets in their way.

An interesting thing about Walker's character that is worth to mention is how he is always well-intentioned. When he's babysitting the I.M.F.'s operation, it is understandable where Walker is coming from as Hunt is showing more and more signs of losing his sanity and becoming a loose cannon, an example being when Nils Delbruuk is in a hospital bed and Hunt loses his temper and seems to want to fight him, which is especially evident since Delbruuk is defenseless at that point and Luther has to hold Hunt back to stop him. At the climax, when it's revealed that Walker is the extremist John Lark, he still keeps his well-intention goals, as all he wants is to do an act heinous enough for the world powers to finally agree and come together to stop something, believing that it will cause peace. This is different from Solomon Lane, who seems to only care about hurting Ethan as much as possible. 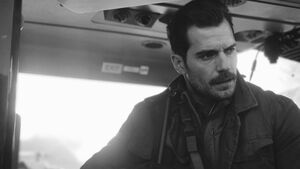 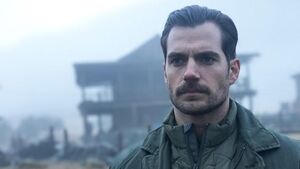 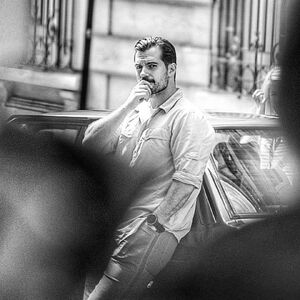 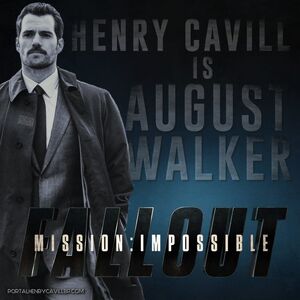 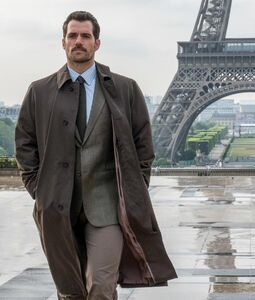 The famous shot of Walker in Paris with Sloane. 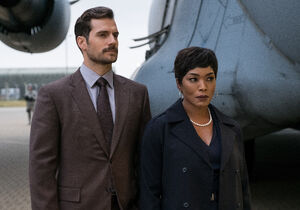 Walker and Sloane next to the airplane. 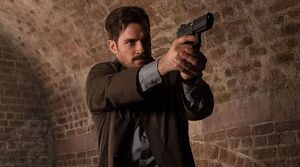 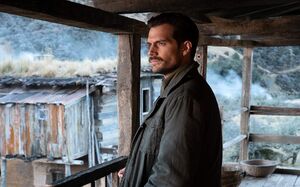 Walker's mental breakdown as he reveals his newly disfigured face just before his final fight with Hunt. 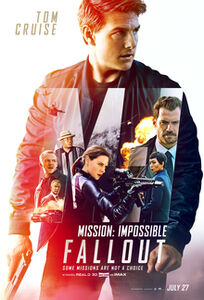 Walker on the film's poster. 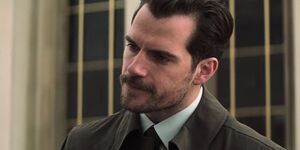 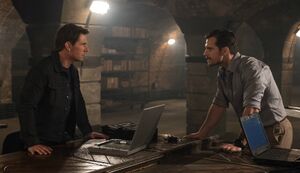