Worker of the Thneed company

Make money by chopping down trees to produce thneeds and ruin the Truffula Forest.

Aunt Grizelda (also simply known as Grizelda) is a minor antagonist in the 2012 computer-animated adaptation of The Lorax. She is the aunt of the Once-Ler and like the rest of her family, she cares only about money.

She was voiced by the late Elmarie Wendel.

Grizelda is a slightly brawny woman, she has red hair with two curled buns and her ears are hidden, and wears red lipstick. She wears a purple leather jacket with a lavender furry collar, and wears a purple bowler hat with a tall lavender feather on top.

Like the rest of her family, she is money-hungry and she hates nature, and tries to ruin it. She dislikes the Lorax for trying to protect the Truffula Forest, and tries to stop him from doing so.

Grizelda works for her nephew, The Once-Ler, in chopping down trees to make thneeds and ruin the Truffula Forest. The Lorax tells The Once-Ler and his Family that they can not live here, and Grizelda starts calling the Lorax a "giant furry peanut" and they start a fight. The Once-Ler told the Lorax that he would not hit a woman, the Lorax stops and says "That's a woman?" as he becomes surprised.

When the Lorax sees Brett and Chet chopping some of the trees down, he tries to stop this, but then Grizelda stops him and told him that Mr. Once-Ler is not seeing anyone right now. She toss The Lorax aside when he tries to remind the Once-Ler of his promise to never cut down the trees. During the song "How Bad Can I Be?", she and the rest of the family started chopping the trees down and sells the Thneeds to make more money, and they pollute all the Truffula Forest, which makes the animals very sick, causing the Lorax to send them off.

After the Truffula Forest is all ruined without any thneeds left, Grizelda packs up and leaves off with her family and The Once-Ler stays in the bleak forest and becomes a recluse. 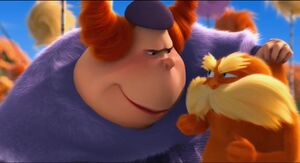 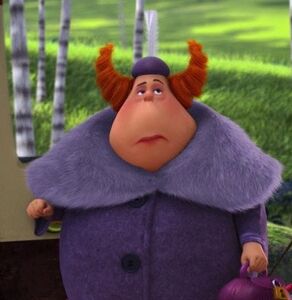