The Girl Next Door

Manipulating her sons into becoming her accomplices.
Torturing people.

Torture and kill Meg and Susan (succeeded for Meg but failed for Susan).

Presumably kill her sons and David after the two girls (failed).

Rutherine "Ruth" Chandler is the main antagonist of the novel and film adaptation of The Girl Next Door by Jack Ketchum. It is based on the real-life murder case involving a 16-year-old Indiana girl and her caretaker, Gertrude Baniszewski.

She was portrayed by Blanche Baker.

The film begins with David Moran reflecting on his past after he witnessed a hit and run in 2007. The film then goes back to the year 1958, and it is there that he met two young girls named Megan "Meg" and Susan Loughlin. Their parents were killed in a car accident, and they were sent to live with the Chandlers as a result. Their aunt and guardian was Rutherine "Ruth" Chandler and she would routinely dish out punishments for the two defenseless girls.

Meg first met David by the creek. The boy noted that Meg was stunning with her red tresses and long tanned legs. He also admired the scar he saw on her arm. David developed a crush on her. The two of them spent their time capturing crayfish, and then letting them go. Meg revealed what had happened to her parents and that now, she and Susan live with the Chandlers.

One day, Meg approached David asking him for food. She hadn't eaten in "almost two days". The two discussed Ruth. Meg was clearly disturbed by her aunt's strange behavior towards her. She said that she used to love painting, but now that Ruth was around she gave it up. David asked Meg to make a painting for him, to which she eventually agrees. The next day, Meg handed over the finished work to her friend. It was the image of a boy lying on his stomach by a creek, surrounded by woodland.

Later, David went to the Chandlers. He gave Ruth the painting, claiming that Meg had done it for her. David did this with good intention, but Ruth called his bluff. The biased and jealous woman then, in great detail, told everyone present in the room of prostitution. Ruth heavily implied that Meg was a slut and delivered a lecture on today's girls and how they are so easily swept off their feet. She said that a prostitute deserve nothing but a thrashing, and wrapped things up by nonchalantly asking who was up for a beer. Meg stood in the room and made her best attempt to not cry.

On another morning, David walked in to find Willie, Donny and Woofer (Ralphie's nickname) tickling Meg. While initially it seemed rather innocent, Meg slapped Woofer because he touched her inappropriately. The boys (excluding David) ran to Ruth. She accused Susan of "conniving" with Meg, lifted up her skirt, forced her panties around her ankles, and mercilessly beat her. Meg sobbed and tried to reach out to her sister but was held back by the boys. Ruth also took Meg's mother's ring from her against the girl's will.

When Meg tried to tell a cop about what her aunt had done to her, Ruth punished Meg by tying up the girl in the basement. Ruth would encourage her own children and even most of the neighborhood kids to torture Meg, physically and sexually. She would allow them to have their way with her, with Willie being the sole exception.

Susan herself didn't fare any better. Whenever Meg didn't listen to Ruth, she would punish her for her sister's perceived disobedience. The children of the neighborhood considered her as nothing but a plaything. They would cut her, beat her, and burn her with the butts of their cigarettes. David ultimately decided that enough was enough, and attempted to free the two sisters from their bondage.

David returned to the house later on, and he discovered, to his horror, that Meg was being raped by her cousin, Willie. Ruth then tried to convince David to take his turn with the helpless young woman, and when he refused, Ruth carved the words 'I FUCK\FUCK ME' onto Meg's stomach. Ruth's assistants later restrained David. The malicious old woman proceeded to mutilate Meg's clitoris with a blowtorch, in an attempt to deny Meg all sexual desire.

David managed to untie himself the next day, and soon found Susan tending to her sister, who was unconscious at the time. Susan stated that Meg had tried to take her with her in an effort to escape from the house, but Ruth caught them before they could make it out the door. She then revealed that Ruth had been molesting her to the extent of making her bleed. This caused Meg to become even more worried about Susan's safety and unwilling to leave her alone. David tried to console Susan, assuring her that everything would be okay.

Fearing that Meg might not last any longer, David set the cellar on fire. When Ruth arrived in the basement, he violently bludgeoned her to death with Susan's crutch. The cops appeared shortly after and arrested Meg's remaining tormentors. David retrieved Meg's mother's ring, and returned it to her. Meg accepted it gratefully and succumbed to her wounds. Soon David was not with the beautiful, sweet child who had been through so much, but a corpse. Meg Loughlin was dead.

The film then ends by going back to the present, and David remembered Meg saying that it's what you do last that counts.

Differences Between the Book and the Film

As with most film adaptations of books, several scenes from the original book were changed due to its explicit scenes.

In the novel, Meg was subjected to scalding hot showers, eating dog feces and having a bottle inserted into her vagina. There is also a scene in which Ruth commanded Meg to open her mouth so she can smell her breath. Ruth suspected Meg had stolen food. Thus, she gave her this strange request to so she (Ruth) could confirm whether or not Meg had tasted a hamburger that day. Meg refused to open up, resulting in a war of words between the two. All the children are surprised by Meg's mature and firm decline. In anger, Ruth orders her sons to hold Meg and forcibly opens the girl's mouth.

The scene in which Meg's vagina was mutilated with the tire iron was only suggested in the film whereas in the novel, it was described in full detail. The way in which Ruth meets her end is also different in both versions. In the film adaptation, David beats her to death by using one of Susan's crutches, while in the novel, he pushes her off the stairs, causing her neck to snap as a result. The film is actually considered tame compared to the original book. In the novel, she is said to be 37 years old. In the film adaptation, she appears to be in her early to mid-sixties, and implies that she wants to do away with the girls (and eventually her "sons") to regain beauty.

Despite her death, Ruth left a disturbing legacy that greatly affected the surviving characters. David still was pained from his failure to save Meg all those years ago, whereas Susan is still scarred from Ruth's abuse. Meanwhile, Woofer was arrested alongside an unidentified juvenile for the gruesome murders of two teenage girls. David notes that he resembled his mother in some ways. This was only mentioned in the novel.

Ruth is a very disturbing and rebarbative individual. In the novel that the film was based on, Ruth appeared as being a single mother who was a severe alcoholic, in lower middle-class, and was easy to anger. She is also noted for being mentally unstable and only became an all-out sociopath once she took Meg and Susan under her care.

Her inhumanity is emphasized when after witnessing her crimes, David compares her to a "zombie", seemingly feeding on the suffering of others. Ruth was also extremely misogynistic and provocative, as she believed that all women were prostitutes who deserved to be treated like animals [never mind the fact that she herself was a woman] and men were stupid and that they only knew how to work and then abandon women when they were needed the most. She saw women as being cursed, and that the only way to "purify" them was by taking out their desire (i. e. removing their clitoris).

She still expressed that belief even when she was in the process of being tried for Meg's death, by stating that she "did a good thing for her". During one of her "sessions" with Meg, she explained that she learned that women were garbage from watching her father beat and rape her mother. The book states that she and her husband had an uneasy relationship. However, she may have been unfaithful.

In fact, while the film adaptation doesn't seem to give Ruth any clear motivations for her actions, it is heavily implied that part of the reason for her hatred towards Meg was that she was envious of her youth and her innocence, as she (Ruth) was old and ugly. This drove her to not only destroy Meg's body, but she also tried to destroy her very innocence. It is also possible that Ruth is simply projecting her self-hatred and insecurities from her failed marriages, which took a toll on her personality and appearance, onto Meg, who was young and ironically a virgin, which Ruth constantly accused of not being.

In addition, Ruth also didn't seem to care for her own sons and it was unknown if she abused them as well, yet was shown to be very negligent of them. She actually despises them, as they remind her of her ex-husband, and she even cites children as being something akin to a parasite that takes away a woman's happiness and money.

David even points out that, given the chance, she most certainly would have not only killed the two girls, but she would also betray/disown and kill her own sons, and not give the slightest hint of remorse. Aside from her lack of familial love, she was also unconcerned for the other neighborhood adolescents, and pretty much unconcerned for anyone. 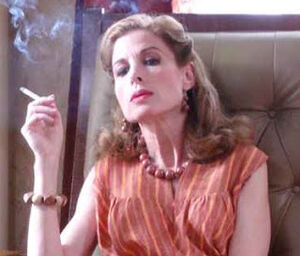 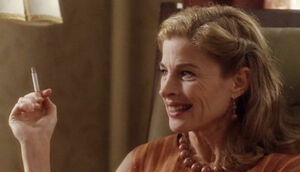 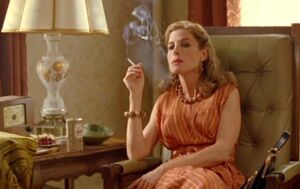 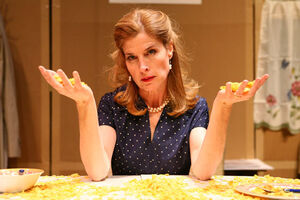 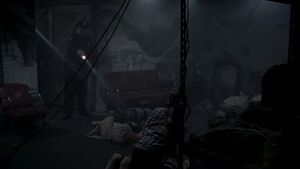 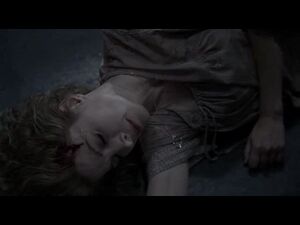 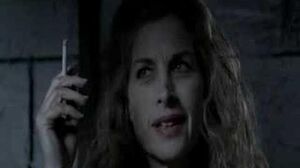 The Girl Next Door Clip 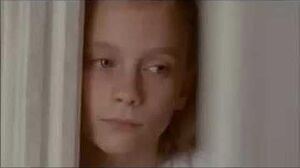 The Girl next door 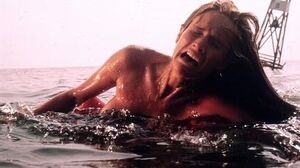 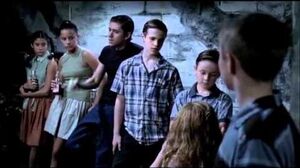 Come on mom, why can't I fuck her? 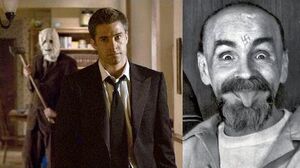 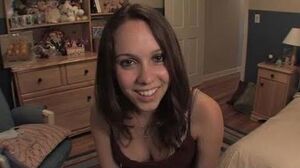 9 Horror Movies That Went Too Far