One of James's two aunts and tormenters

Aunt Spiker (simply known as Spiker) is one of the two main antagonists of the 1996 Disney film James and the Giant Peach (which is based on the 1961 children's novel of the same name by the late Roald Dahl), the other being Aunt Sponge. She is one of James' two cruel aunts and Aunt Sponge's sister.

She was portrayed by Joanna Lumley, who also played Maudeline Everglot in Corpse Bride.

After the death of James' parents, Spiker and Sponge had no choice but to take in James and "raise" him. Instead of caring for him, she and Sponge force him to do all the work around the house, they had a tendency to beat him when he disagrees with them or backtalk, and almost always make him go into his room without dinner. She and Sponge never call James by his name, but always refer to him with mean, insulting, and opprobrious names such as "you nasty little beast".

Aunt Spiker is a tall, thin, and ugly woman. She is probably the older aunt. Lke her younger sister Sponge, she claims that she is a very beautiful woman, but looks beg to differ. At first, it seems like she has red hair, but later on, it's revealed to be a wig, covering short gray hair on an almost balding head. To further illustrate her skinny appearance, her eyes are sunken into her head. She is mostly seen wearing a long green gown. She also seems to be the smarter one of the two.

Spiker and Sponge adopted James after his parents were eaten by a rhinoceros and are very abusive and treat him like a slave, forcing him to do hard labor and feeding him nothing but fish heads. Aunt Spiker is thin, quiet and cold. Both have a terrible hatred of insects and bugs and kill them in a variety of awful ways, and are thus hated by them as well. It is unknown if Spiker and Sponge are the sisters of James' father or mother. In the book, the illustrations show them to be elderly, so they could also be his great-aunts.

Sometime later, she and Sponge discover a peach on a withered old tree, and watch it grow to immense proportions in a matter of seconds. She and Sponge use the giant peach as an attraction, making lots of money as James watches from the house, not allowed to leave or play with the other children. That night, she and Sponge send James outside to pick up the garbage dropped by their customers.

Later, Spiker and Sponge go searching for James, annoyed at his lack of work at cleaning up the garbage. As they look for him, they tease about the rhino when Spiker hears a sound (Centipede gnawing at the peach's root). She and Sponge investigate where the noise is coming from, but then are thrown off balance by a sudden shaking of the ground. They turn around to see the peach about to roll in front of them and rush to their car in panic. After adjusting the seat, Spiker tries to start the car, but is unable to. As the peach rolls closer to them, Spiker keeps trying to start the car, unable to step on the accelerator.

Later, when James escapes on the giant peach, he is followed by her and Sponge all the way to New York, apparently somehow managing to drive their now crushed car under the ocean and reach New York covered in seaweed and crabs, where they try to convince the authorities that James is a liar and that he be released to them. One night, while navigating on the peach, James has a nightmare of him as a caterpillar being chased and attacked by Spiker, Sponge, and the rhino, eventually getting trapped in a blind alley before he awakens. However, James, now no longer afraid of her and Sponge, stands up to them and reveals the truth about their horrible treatment of him. Fed up with James daring to stand up to them, she and Sponge furiously attack him with firemen's axes until the sudden reappearance of the insects came to James' rescue. James and the bugs tie her and Sponge up with Miss Spider's thread, and the beat cop has them taken away on a crane. What happens with Spiker and Sponge afterwards is completely unknown, but most likely, the two sisters were arrested for child abuse after being taken away, paying for their crimes once and for all. Other possibility, however, could be that, with their faces clogged with spider web, they were not able to breathe and suffocated to death, though it's plausible that James would have not allowed to get her aunts killed even though they tried to kill him.

After the credits, there is a scene showing an arcade-like game which consists of controlling a rhinoceros to attack replica models of her and Sponge.

In the book, when the peach gets loose and rolls, it rolls over her and Sponge, killing them both, and they subsequently do not reappear at the end.

In the 1996 film, she and Sponge survive and pursue James to New York City in their beat-up car (in the Ice World, James and Miss Spider see a shipwreck with figureheads, having a terrible resemblance of her and Sponge). Upon arriving in New York, both are soaked as if they had been driving their car across the seabed. She and Sponge attempt to kill James but are tied up with Miss Spider's silk and arrested.

In the 2015 musical, which combines material from both the book and the film, James' aunts survive like in the film. However, the peach lands atop the Empire State Building, and eventually it falls off at the story's climax. As such, Spiker and Sponge are both crushed to death by the peach-pit like in the book. 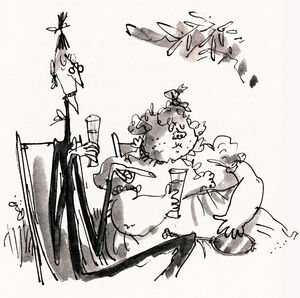 Spiker and Sponge in the book 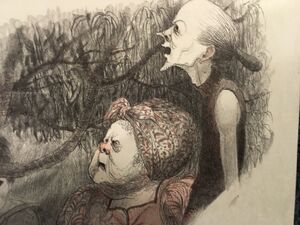 Spiker and Sponge in the original 1961 book 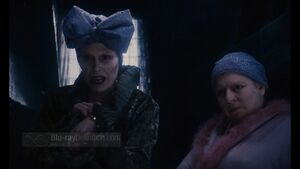 Spiker and Sponge ordering James about 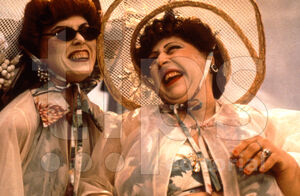 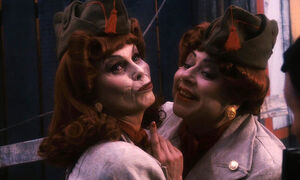 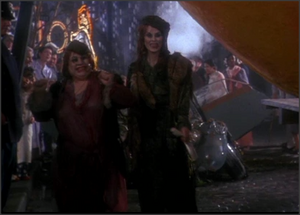 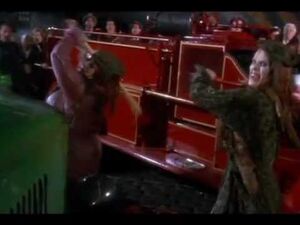 Spiker and Sponge in anger 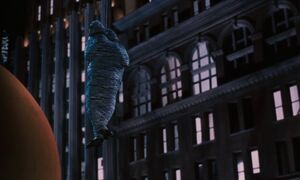 The Aunts' defeat
Add a photo to this gallery

Retrieved from "https://villains.fandom.com/wiki/Aunt_Spiker?oldid=3283807"
Community content is available under CC-BY-SA unless otherwise noted.