Servant of the Aspects

Break free from the Aspects

Aurelion Sol, also known as The Star Forger, is a villainous playable character in the multiplayer online battle arena game League of Legends.

A great celestial being, Aurelion Sol has existed since the dawn of creation as a forger of the cosmos, but was tricked and enslaved by the Targonian Aspects many millenia ago. Hoping to find a way to gain his freedom, Aurelion Sol now seeks revenge on the puny world of Runeterra, for when he's finally free he will crush it into dust.

The 130th champion added to the game, Aurelion Sol was released on March 24, 2016, and can be played in the mid lane.

He is voiced by Neil Kaplan, who also voiced Green Goblin in Spider-Man: Battle for New York and Gorilla Grodd in Justice League Heroes.

Long ago, Aurelion Sol was born once creation itself began to be. Wandering the void with his fellow Celestials while filling the nothingness with the universe and its glory, Aurelion was by far the bigger creator of the universe, shaping existence to be as the others did little. After discovering the world through one of his suns, the Auspects coaxed him to look into this world, finding life and civilization begging for deities to guide them.

The flattered deity shaped his draconic form and descended to Earth, being worshipped by the Targon for making the sun and giving him offerings. However, this was a trap, as the people of the island used a crown to sap his knowledge and banished him back into the heavens. Enraged by their theft of his power to made the Ascended, Aurelion Sol broke free of his shackles but can only watch as eventually, the people of Targon succeeded in their plans of absolute dominance. However, as disaster gripped the world and the people of Targon became weak, Aurelion Sol saw his chance and descended back to Earth. Now desiring revenge on the world, Aurelion Sol desires to destroy Runeterra and restore balance to his control.

In game, Aurelion Sol takes the role of a battlemage-type character, using cosmic magic to attack. His passive, Center of the Universe, grants Aurelion Sol three orbiting stars that damage foes based on the rank of Celestial Expansion, as well as applying effects and killing any minion below 25 points of health. Aurelion can also fire a star (that acts like a grenade, expanding before exploding/stunning enemies) with Starsurge, expand his stars outward to attack with Celestial Expansion, fly forward in a burst with Comet of Legend, and breath a beam of celestial fire that slows foes with Voice of Light.

As a deity that's existed since the beginning of time, Aurelion Sol has little respect for humanity or even Runeterra itself, because to him, their world is nothing more than an insignificant speck in a vast cosmos of much more interesting stars. The creator of entire galaxies, Aurelion is very proud of his work and likes to show it off, though this vanity is easily taken advantage of by the Targonian Aspects, who tricked the easily-flattered Aurelion into wearing the enchanted crown. Aurelion Sol is very selfish and does not care much for others, preferring to keep to himself, as in his mind he is the most important person (or dragon) anyway. His dream is to be free from the Aspects so he can destroy Runeterra and be free and on his own once again to create his stars in peace.

Aurelion Sol as he appears in Legends of Runeterra. 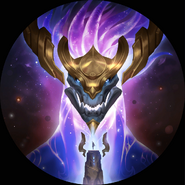 A teaser for Aurelion Sol.