Destroy the U.S. supply of gold in Fort Knox and become the richest company in the world (failed).

Corporate Smugglers
Auric Enterprises is the main antagonistic faction of the 1964 James Bond film Goldfinger. It is a metallurgical and engineering company founded and owned by Auric Goldfinger until the events of the film.

Goldfinger founded the company in Switzerland to engage in legitimate bullion and jewelry dealing. Unknown to the public, the company was known to illegally smuggle gold throughout all of Europe, recently through Goldfinger's Rolls Royce vehicle, which was witnessed by James Bond.

Following Bond's capture and transport to Kentucky, Bond soon learns of Goldfinger's plot: he plans to destroy Fort Knox and supply of gold with a nuclear bomb (created by Mr. Ling). As such, Goldfinger would have to have his aviator team called the Flying Circus (led by Pussy Galore) to spray nerve gas across the area that will kill 60,000 troops so that he can lead his task force (led by Oddjob and Kisch) to transport the bomb into the vault. Once the bomb is set to go off, it will destroy Fort Knox and render the gold radioactive and useless for 58 years, thus putting the U.S. economoy in chaos and allowing the value of Auric Enterprises' gold to increase many times, thus making it the most richest company in the world.

To that end, Goldfinger gets several crime bosses (Mr. Solo, Jed Midnight and Jack Strap) to smuggle the gas and weaponry to the company as part of his plan before having them all killed to cover his tracks. Not wanting this to happen, Bond seduces Galore, convincing her to get the Flying Circus to replace the gas with a more harmless subtance while alerting the U.S. government about the plot. This allowed the U.S. Army to take down all of Goldfinger's men, including Oddjob, Kisch and Mr. Ling. Goldfinger would later meet his end after being sucked out from a plane to his death after a brief fight against Bond, and it's implied that Auric Enterprises would be shut down afterwards. 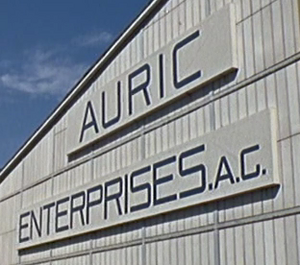