Breeding horses.
Working on his tan.

Eliminate the United States gold reserve to become the world's richest man (movie).
Help several criminal gangs steal the US gold reserve to cripple the American monetary system for their own benefits (novel; all failed).

Auric Goldfinger is the titular main antagonist of the 1959 James Bond novel Goldfinger and its 1964 film adaptation. He is a powerful gold smuggler, jeweler and metallurgist and the head of his gold company Auric Enterprises.

He was portrayed by the late Gert Fröbe, who also played Baron Bomburst in Chitty Chitty Bang Bang, and the title character in the 1974 film adaptation of Der Räuber Hotzenplotz. In Goldfinger, his voice was dubbed over in post-production by the late Michael Collins.

Goldfinger was a wealthy jeweler who worked mainly with gold (as his name implies), being known as the biggest gold collector of the world. He had his own gold resources, but he was being investigated for smuggling illegal gold. James Bond was ordered to investigate him, discovering that Goldfinger smuggled gold in the parts of his own car, which was completely made of gold.

When Goldfinger learned about the investigation, he invited Bond for a friendly golfing game, where he threatened 007 to stay out of his business, ordering his bodyguard Oddjob to give 007 a demonstration, so Oddjob took out his hat and threw it at a statue, cutting it by the neck. Despite the threat, Bond continued investigating, which led to his capture. Goldfinger only spared him thanks to a bluff from Bond, instead imprisoning the agent at his ranch. Overhearing a meeting of Goldfinger and his associates, Bond eventually learned that Goldfinger was planning to invade Fort Knox, the U.S.'s fortified gold reserve.

At first, Bond thinks that Goldfinger was planning to steal the gold, but after having a drink with Goldfinger, Bond soon learns that Goldfinger actually intends to destroy Fort Knox with an atomic bomb made from China (on behalf of Mr. Ling, Goldfinger's nuclear specialist from China), which would render the gold useless and validate the value of Goldfinger's gold, thus making him the richest man in the world; the Chinese government would then be able to take advantage of the US's economic fallout and establish themselves as the new global economic power, hence there support of Goldfinger's plan. To ensure that his plan would be successful, Goldfinger plans to have his fellow band of female pilots to spray nerve gas around the vicinity that would kill thousands of citizens, which will allow him and his forces to enter Fort Knox without resistance. He also decides to bring Bond along (as he plans to have him handcuffed to the bomb to finalize his plan).

However, before the plot went into effect, Bond convinced Goldfinger's personal pilot Pussy Galore to help him thwart Goldfinger's plans. To that end, she secretly called Washington and switched the nerve gas to a more harmless one that would send citizens into a temporary sleep. At Fort Knox, Goldfinger has Bond strapped to the bomb and bids him farewell before learning out in horror that several U.S. soldiers have arrived to the scene. Posing as a U.S. army officer, Goldfinger betrays Mr. Ling by shooting him and Oddjob and Kisch by trapping them inside the vault with the bomb. Goldfinger manages to escape after shooting down several U.S. soldiers while Oddjob stays behind to ensure that Goldfinger's plan must succeed, even at the cost of his life and killing Kisch to ensure that no one disarms the bomb.

Though Bond manages to finish off Oddjob by electrocuting him, he has trouble trying to disarm the bomb. After the U.S. soldiers manages to finish the rest of Goldfinger's men, they get in their bomb expert to successfully disarm the bomb for good, thus foiling Goldfinger's plot. After the battle is won, Bond is sent to Washington in a private jet to meet the president, only to find out that Goldfinger has boarded the plane earlier, left the tied-up pilots in the hangar and had Miss Galore pilot the jet. Goldfinger plans to finish off both Bond and Galore for ruining his plans, but during a moment of carelessness as he points his gun away from Bond, Goldfinger is attacked by Bond and the two fight in the airplane. During the fight, either Bond or Goldfinger accidentally shoot a window of the cabin, causing it to shatter. Goldfinger is sucked out of the plane's window before falling to his death.

Goldfinger appears in the show, a spinoff of the movies. How he survived his death is never explained. He is shown as an of ally of S.C.U.M. His characterization on the show is somewhat closer to the book, as he now wants to procure gold rather than destroy it.

Auric Goldfinger is a greedy man who is completely obsessed by gold. Under his jovial appearance, Auric Goldfinger is in fact an extremely dangerous individual who is ready to do anything to achieve his ends, for example by manipulating a group of American gangsters or world powers such as China, or to eliminate in a way monstrous or not, all those who would have the audacity to stand in his way or betray him, even if the betray is a totally trivial matter. This is clearly showed when he ordered Oddjob to kill Jill Masterson for betraying him in a Canasta card game in which he lost 10,000 USD. This fact clearly points out his boundless greed and his incredible pettiness as he willing to cheat for a small amount of money compared to his vast fortune. He also often uses gold in his assassination methods. In addition to this, Goldfinger is protected by his very numerous resources and his goons. He is also shown to be a very intelligent man, having numerous skills at his disposition. He prefers to avoid fighting by himself, but at the end, he ultimately fights with James Bond. 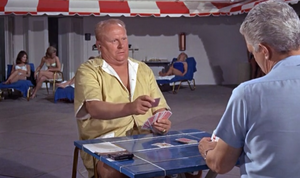 Goldfinger forced to use his game of poker. 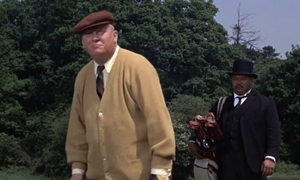 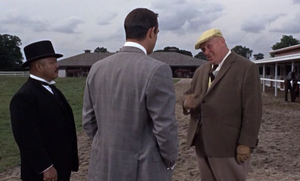 Goldfinger with a captured Bond on his ranch. 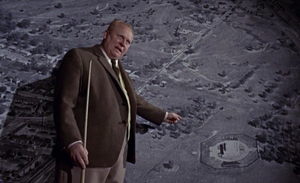 Goldfinger explains his plan to his business partners. 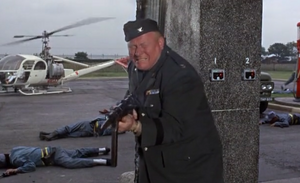 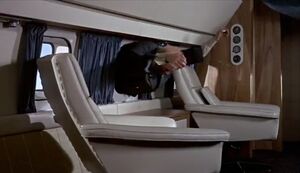 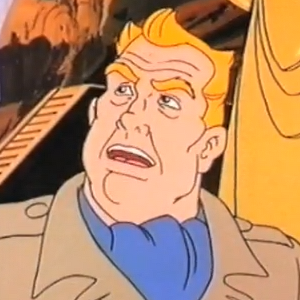 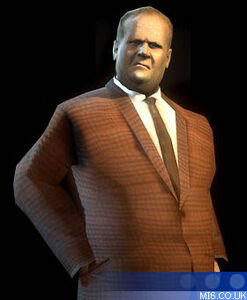 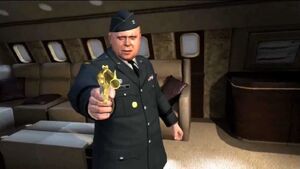 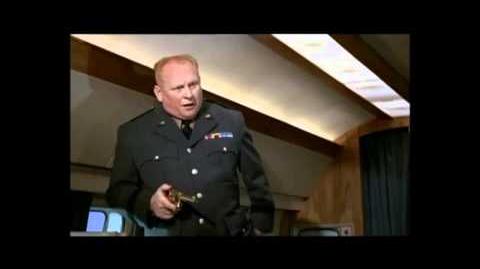