Mesmerizing beauty, as well as many gadgets that allow her to move objects, freeze people, turn people into animals, and some more.

Space Pirate from the Future


Aurora Borealis (whose actual name is Shirley) is a villain from the movie Monica's Gang: An Adventure Through Time. She is an descendant of Black Beard and the Queen of the Space Pirates.

When Jimmy Five is sent to future in order to recover the Air Element, he encounters Astronaut in his spaceship and then, they are attacked by Aurora's ship.

Aurora's ship's sensors, which can detect valuable objects, found the Air Element in Astronaut's ship, Aurora, intending to take it for herself enters the ship in order to get it. Astronaut immediately get hypnotized by her beauty, what gives her time to find the Air Element which Astronaut had hidden. Coming back to his senses, Astronaut tries to stop her, but Aurora, using one of her gadgets, freezes him. Before leaving the ship, Aurora takes Jimmy Five's communicator uses a staff-like gadget on him, which would turn him into a mouse unless someone speaks her name correctly. Jimmy however, has a diction problem (he exchanges "r" for "w") that impedes him from deactivating the staff.

Franklin, after trying to communicate with Jimmy, sees that the communicator is with Aurora, and send Smudge to help him. After some time of Jimmy trying explain how to deactivate the staff, Smudge finally understands the password and deactivate the staff. His stink also, somehow, disables the freezing that had been casted on Astronaut, and they go after Aurora's ship.

When they manage to infiltrate the ship, they find Aurora. During the confront with her, Jimmy Five and Smudge manages to get the Air Element, when Aurora tries to take it back, Smudge accidentally uses it on both her and Astronaut, revealing Aurora's secret: the wind from the Air Element is so strong that takes Aurora's wig from her head. The wig hits Astronaut and he is thrown in the space.

Aurora manages to take the Air Element back and send the boys after walking the board (which is actually a piece of timber left after the destruction caused by the Air Element) to space.

Surprisingly, Astronaut appears with a jetpack and gets back the communicator and the Air Element from Aurora, he also rescue Jimmy and Smudge, who were almost losing breath because of the abscense of oxygen in the space.

Then, Astronaut casts the Air Element on Aurora's ship, sending her and the pirates away.

Aurora Borealis' original name is Cabeleira Negra, what, in portuguese, can mean Black Hair, or Black Wig, proving that she is a descendant of Black Beard, but also, that she has a wig and absolutely no hair.

Aurora has many gadgets, which includes telekinesis-like beams that allows her to move objects or freeze enemies, a detector of valuable objects, a staff gadget that can turn people into mice, a hairbrush with a laser blade hidden in it, and a spaceship.

Aurora uses her telekinetic beam gadget to get the Air Element. 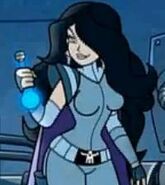 Aurora gets the Air Element.

Aurora uses her staff-gadget on Jimmy Five, in order to turn him into a mouse. 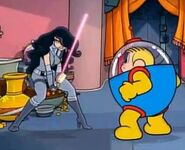 Aurora sends Jimmy Five and Smudge to the space.

Aurora's spaceship being hit by the Air Element.