Aurora Unit 313 is the final antagonist of Metroid Prime 3: Corruption. It is an organic supercomputer that was created by scientists of the Galactic Federation and was later stolen by the Space Pirates and used by Dark Samus on the planet Phaaze, the source of all Phazon.

Along with the other Aurora Units, Aurora Unit 313 was constructed at least 20 years prior to the events of Metroid Prime 3: Corruption, by the Galactic Federation.

During the events of Corruption, Aurora Unit 313 and the other Aurora Units had become corrupted by a Phazon-based virus, which was thought to be caused by the Space Pirates. The Space Pirates had soon attacked the G.F.S. Valhalla, the ship that carried it, hoping to steal the unit from the Federation, which had been taken to the planet Phaaze, where it would be used by Dark Samus as a way to spread Phazon across the galaxy and soon the universe. Dark Samus and the Space Pirates kept the unit in the heart of the planet, where it gained the ability to control the planet and the production of Phazon.

After destroying the Leviathans on the planets Elysia, Bryyo, and the one on the Pirate Homeworld, which were planets targeted by Dark Samus, Samus Aran traveled through a Leviathan wormhole that led her to the Phazon planet. Once reaching the planet, Samus prepared to land on the surface but not before witnessing a space battle between the Galactic Federation and the Space Pirates.

When Samus reached the heart of the planet, she found Dark Samus inside and the two quickly engaged one another. After defeating her doppelganger once again, Aurora Unit 313 emerged from the ground and Dark Samus fused with it, prompting Samus to fight the unit. When the unit was assumed defeated, it fell to the ground, revealing a weak point that requires Samus' grapple hook, and after pulling on the weak point, it became unattached from the cord and began flying around. After defeating it a second time, another weak point became visible, allowing Samus to finally destroy it. Once it was destroyed, a chain reaction was caused by the symbiosis of Phaaze and the AU, and the planet was ultimately destroyed by an explosion, ending Samus' lengthy battle against Phazon for good. 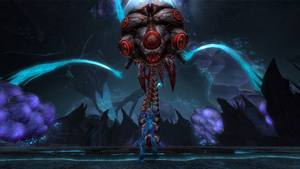