Kill the Luminary as revenge of being sealed away by Erdwin, the original Luminary.

Auroral Serpent (魔竜ネドラ,Evil Dragon Nedora in Japanese)​​ is a minor antagonist in Dragon Quest XI. He is an ancient dragon that is sealed away in an ice lake long time ago.

He is voiced by Takaya Hashi in the Japanese version, who also voiced Great Shinobi Owl in Sekiro: Shadows Die Twice. He is voiced by Martin Wenner in the English version.

Before the event of the game, the original Luminary sealed Calasmos's minion, Auroral Serpent, away in an ice lake.

After the fall of Yggdrasil, Auroral Serpent break frees and roams around. But not yet regain his full power.

When the Luminary goes to Arboia to look for their remaining party members, they are ambushed by the hungry Auroral Serpent, although it seems like they defeated the serpent after a battle. He suddenly give out a paralyzing breath and paralyzed the party. Luckily, before Auroral Serpent can feast, Serena uses her lyre to stuns him and summoned some violent wind to ambush Auroral Serpent, killing him for good.

In the World of Lost Time, after the rebirth of Calasmos, Auroral Serpent breaks free and immediately regain his true power, Queen Frysabel asks the Luminary to help her to defeat the dragon since Auroral Serpent has attacked Sniflhiem long time ago. The Luminary than battle the dragon and ultimately slain him.

Auroral Serpent is a black Chinese dragon that has yellow horns. When strengthened by Calasmos, his eyes glow green. 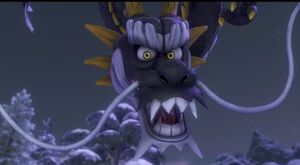 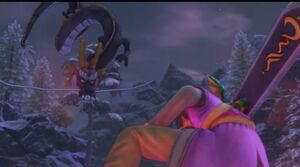 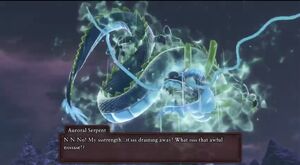 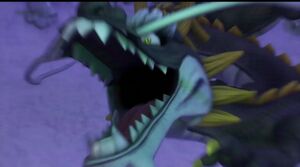 Auroral Serpent screaming in fear before getting killed by Serena. 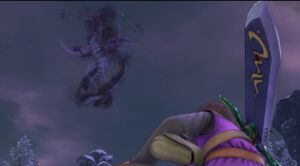 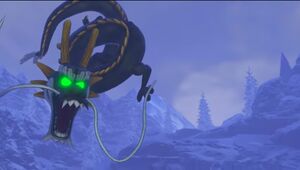