Stealing their lightsabers after killing them.

Get revenge on the Jedi Order (failed).

She appeared as the main antagonist in the Fett arc, where she and Boba Fett attempted to kill Jedi Master Mace Windu.

In her cameo in The Phantom Menace, she was portrayed by Michonne Bourriague and voiced by Jaime King in Star Wars: The Clone Wars TV series.

Aurra Sing was one of the most powerful and ruthless bounty hunters in the galaxy. She was remorseless about killing, whether it be wounded clone troopers or former partners such as Castas. Despite her cold-hearted and ruthless nature, Sing was also a somewhat compassionate mother to Boba Fett during his teenage years, sometimes addressing him as "honey" and stopping him from drinking alcohol in Hondo Ohnaka's bar. She was very selfish, sarcastic and egotistical, as she abandoned Fett to save herself after the boy was captured by Plo Koon.

She also tried to get the boy to murder the helpless Commander Ponds and she simply shoved him aside and killed Ponds herself. Aurra Sing also had a romantic relationship with Hondo Ohnaka, and though they were no longer lovers, Ohnaka still referred to her as "my dear". Consequently, after Sing and Boba arrived at Ohnaka's base, he asked if Boba was his son. Even with their past, Ohnaka refused to help Sing when she tried to lure Ahsoka Tano and Plo Koon into a trap.

Aurra Sing was renowned as a skilled bounty hunter and assassin during the Clone Wars. She became feared by even the most powerful criminals. At some point in her life, she came across the pirate Hondo Ohnaka, and had a short relationship with him.

Later during the war, she teamed up with Boba Fett, son of fellow bounty hunter Jango Fett, in an attempt to seek revenge on Jedi Mace Windu to avenge Jango's death. To that end, she recruited Bossk and Castas to aid them in their mission. The first part of her plan involved Boba infiltrating the Clone Youth Brigade under the alias "Lucky" on board the Republic warship Endurance. Aurra kept in contact with Boba from Slave I, and ordered him to place a bomb with a laser tripwire outside of Windu's quarters. However, a clone accidentally triggered it, and was killed instead of Windu. Aurra then told Boba to destroy the ship's reactor core, to which Boba reluctantly complied and regrouped with the brigade. He later deactivated their escape pod as the Endurance crashed on the planet Vanqor. Aurra and Bossk then docked Slave I to the escape pod and extracted Boba.

Afterwards, Aurra and the bounty hunters flew down to Vanqor and went to the crash site, where Aurra killed all the survivors except for Commander Ponds, a naval officer, and Admiral Killian, whom she took hostage. Boba then placed his father's helmet in the bridge rigged with an explosive to trap Windu. By the time the bounty hunters regrouped, Windu arrived at the crash site with Anakin Skywalker to investigate. Boba noticed the bomb in the bridge go off and explode, trapping Windu and Anakin in the rubble. Aurra, Boba, and Castas then headed to the wreckage to collect Windu's corpse, hoping to collect a bounty from the Separatists for killing a Jedi Master.

While they made their way up to the bridge, Anakin's droid, R2-D2, attempted to prevent them from reaching the Jedi by pushing rubble around the ship, forcing them to retreat back to Slave I. Later, they noticed R2 flying Windu's starfighter heading for Coruscant to send a distress signal to the Republic. Aurra and the hunters then pursued Artoo in Slave I and disabled its communication system. When R2 attempted to use the Hyperdrive rings, Boba destroyed one of them, but Artoo used the second Hyperdrive ring to escape the hunters and head for Coruscant. When Boba asked Aurra what their next move was, Aurra told him that she would use the hostages to lure Windu to them.

Later, onboard Slave I, Aurra and Boba contacted Windu and told him to surrender, or they would start killing the hostages. Aurra then ordered him to kill Ponds as an example. But when Boba refused, Aurra killed the commander herself. The bounty hunters then arrived on Florrum in hopes of enlisting the help of Hondo Onaka against Windu. Although Hondo refused, he promised not to stand in their way. Later, Aurra overheard a conversation between Castas and a fellow hunter with her comlink, in which Castas planned to betray Aurra. Overhearing the insult, Aurra killed Castas in cold blood. Jedi Master Plo Koon and Anakin's Padawan Ahsoka Tano later arrived on Florrum to rescue the hostages and apprehend the bounty hunters.

Aurra was then confronted by Koon, who interrogated her on the hostages whereabouts. An angered Boba then emerged from the shadows and held Koon at gunpoint while Tano held her lightsaber at Aurra's throat. After a brief stand off, Koon captured Boba while Aurra stole a speeder bike and escaped, but was pursued by Ahsoka. After the padawan rescued the hostages and subdued Bossk, Aurra attempted to escape on Slave I. However, Ahsoka severed one of the ship's wings, which caused Slave I to spiral out of control and crash, and Aurra seemingly perished. After her supposed death, Ahsoka and Koon took Boba and Bossk to Coruscant and imprisoned them. It is later revealed that Aurra survived the crash, as she was pulled out of the wreckage by Hondo.

After recuperating, Aurra was hired by the imprisoned gangster, Ziro the Hutt, to assassinate Padmé Amidala, the senator of Naboo. Her motives were soon uncovered by Ahsoka through a series of visions, and she decided to accompany Amidala to the planet Alderaan. During Amidala was giving a speech, Aurra infiltrated the vents above the room with the intent of sniping the senator. As Aurra aimed her rifle for a fatal shot, Ahsoka intervened as she pulled the trigger, resulting in a mere flesh wound. After a brief confrontation, Aurra managed to retreat and escape the scene. Later, the Naboo royal guard used a luxury droid as a replacement for Amidala, while the real senator gave her speech through the droid in her healing quarters. But this did not fool Aurra, and she proceeded to make a second attempt on the senator's life. After she made her way to Amidala's healing chamber, Ahsoka yet again intervened. Although Aurra managed to subdue the Jedi Padawan, Amidala stunned her and Typho apprehended the bounty hunter. Ahsoka, Amidala, and Typho then took Aurra to Coruscant where she was imprisoned.

After escaping prison, Aurra teamed up with Cad Bane's bounty hunter team for the raid on the Republic Senate Building. During the hostage siege, Aurra covered Bane's entrance to the building by taking out the Senate Commandos with her sniper rifle. After Bane eliminated the remaining Senate Commandos, Aurra shot a dying one. Later, she aided Shahan Alama in searching for the Jedi Knight Anakin Skywalker, whose presence in the Senate Building threatened Bane's plan. Eventually, with the help of Robonino, they managed to render Skywalker unconscious. When the Hutt crime lord was freed, Aurra successfully left the crime scene along with the rest of the group.

Later, Aurra Sing's career as a bounty hunter came to an end when she was killed by Tobias Beckett, a thief working for the Crimson Dawn, a criminal organization under the secret leadership of former Sith apprentice Darth Maul. Tobias claimed that he simply gave Aurra a push and the fall killed her.

Aurra Sing was a female near-human, who was very tall and physically agile. She was known for her distinctly pale skin and green eyes. She also had long, skeletal fingers. Her brown hair was tied in a ponytail on the back of her head, which was strapped with many beads she collected from the Jedi that she murdered. Since she was implanted with a biocomputer to enhance her natural attributes, an antenna protruded from the left side of her head.

She also often wore an earpiece comlink so that she could stay in contact with her allies or listen in on distant conversations. She wore an orange jumpsuit, which covered her whole body except for her head, upper chest, and arms. On top of that, she also wore a short, brown vest with several bullet shells strapped to it. In addition, she wore boots made of rancor skin. She used a brown belt with holsters made of shaak hide to store her twin blaster pistols when they were not in use. 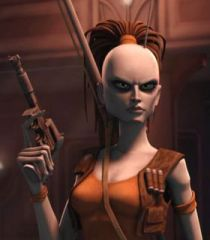 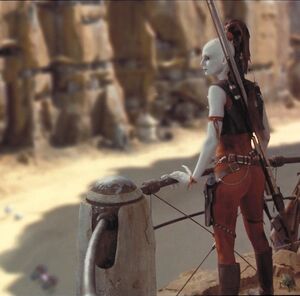 Aurra Sing on Tatooine during the Boonta Eve Race. 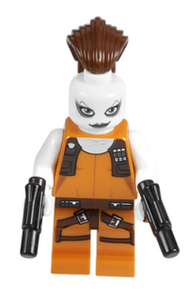 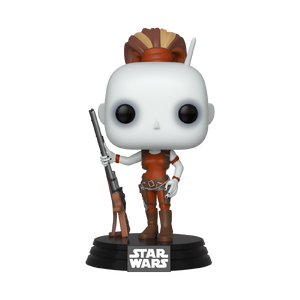