Idol of the Ptolemaic Army

Release itself from its prison dimension and spread malice and chaos upon all.

Dark Deity
The Avatar of Evil is a demonic entity who appears as the main antagonist and the final boss of Metal Slug 5.

The Ptolemaic Army seek to release this demon from the dimension where it is imprisoned. The cult leaders of the Ptolemaics are controlled by it through their ritual masks, making it the true mastermind of the game's events despite its existence not being known until the game's final battle. Its origins and purpose are a complete mystery.

The Avatar of Evil appears as a gigantic gargoyle-like demon with bat wings carrying a huge scythe. Its body is pitch black, with supernatural patterns on its body that resemble a night sky. Its face is covered by darkness, with only its glowing red eyes and a few strands of what appears to be hair visible. It also has a skull face on it's chest, which acts as the demon's weak point. The Evil Spirit is much larger than even the Invader King, currently standing in as the largest boss in the series.

Its approaching is indicated by a thunderstorm in the background, after which the sky goes black and its silhouette seen in the distance. It attacks by shooting energy blasts aimed at the player that crash down to the ground, after which it flies away and raises its scythe. As the scythe hits the ground, it scatters smoke clouds which must be avoided.

Upon defeat, the Avatar of Evil screams and flies away, after which the sky returns to normal, signaling that it has returned to wherever it came from. 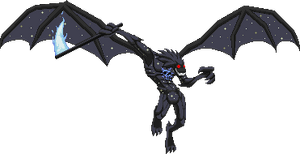 Retrieved from "https://villains.fandom.com/wiki/Avatar_of_Evil?oldid=4197493"
Community content is available under CC-BY-SA unless otherwise noted.