Complete control over technology and the power to eradicate a plant

Destroy Earth
Reduce everything in the universe to nothing

The Avatar of Tech also known as Brainiac Avatar  is one of the main antagonists in DC Universe Online and also one of the main bosses of the game, sure, was one of bosses more danger to all players. He is one of avatars of Braniac who led the attack on the nexus of technology; the Batcave and one of the most remarkable Drones who land to invaders the Earth.

The Avatar of Tech is the last boss encountered in the Batcave: Brainiac Subconstruct raid.

When the typical villains and superheroes fought violent battles on Earth, Brainiac invaded and fencing around the planet, abducting entire cities and sending millions of Drones across the planet, Brainiac abducted entire cities along with the entire population to use them as test their Exobyts, the Exbyts gave powers to various types of elements, such as light, Earth, Fire, Ice, Celestial, and Magic among other powers, and was so Brainiac gave birth to thousands of other villains.

In an attempt to get the technology for Batman, he sent a troop of countless Drones in the Batcave to take possession of the cave and kill Batman, Brainiac triggered the Brother Eye again for this mission, after Brother Eye had been defeated, the players needed to get more deep into the cave to defeat Brainiac and prevent the invasion, after many minutes of battle with hundreds of Drones, players reach level until the end of the stage, where this Avatar was expecting the players with massive firepower.

The Avatar of Tech has a horrendous amount of health and dishes out copious amounts of damage. It does not seem to move. It mainly uses three attacks - a rocket attack that hits ~ 500 multiple times rapidly, a flamethrower attack that could be avoided by staying at the edge of your own attack range, and a homing missile attack, which hits up to over 1500. It signals its missile attack by having a laser target appearing at the player's feet. However, unlike the missile attack of the Brainiac Interceptors, which also displays a laser target, this cannot be dodged. The target simply follows the player. Therefore, use block, or any other damage prevention measure, and quickly. Players next to targets may dodge to avoid splash damage.

After taking some damage, it spawns an Avatar Crawler. The avatar cannot be damaged while it is active. After defeating it, and then the Avatar itself, the gigantic avatar would break apart, revealing the dreaded Brainiac himself. Brainiac doesn't seem to do as much damage, but he summons Eradicators and again, has another massive health bar. 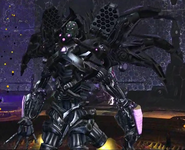 Avatar of Tech in Brainiac clone

Avatar of Tech leading the invasion to the castle Sunstone 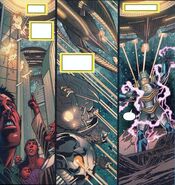 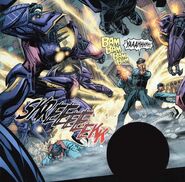