Eat the Children of the Cherokee Tribes (succeeded).

The U'lag‘û is a giant mosquito-Insect deity. The stinger it carries on its head could slice all the way through a man's arm. A bite from the Gallinipper could mean death. The mosquito could drain all the blood from a man in a single gulp. More than the alligators, more than the bears, more than the panthers that hid in the trees, the lumbermen who worked the swamps of North Carolina feared the Gallinipper. The legend of the Gallinipper originates around the now abandoned town of Averasboro, however, many coastal towns in North Carolina have similar versions of the story, including the state's oldest town, Bath. The earliest accounts of a giant mosquito come from the local American Indian traditional mythology.

The Tuscarora were an Iroquoian people that were originally from the area south of the Great Lakes in present day New York. Around 500 CE they began migrating out and settled in North Carolina. The powerful Tuscarora nation blocked colonial expansion toward the Piedmont and south to Cape Fear, so most members of the tribe left North Carolina following their defeat in 1715 CE. Tuscarora Chief Elias Johnson, an 1800s chronicler of his tribe's history and lore, wrote of a mosquito as large as a man called Ro-Tay-Yo.

Only a cemetery surrounded by a grove and a Civil War museum remind anyone passing through that the port town of Averasboro existed. According to Monsters of North Carolina by John Hairr, "The town's property records of the 1850s reveal that thirteen of the fourteen public buildings in the town sold liquor...According to tradition, one of the town's taverns had the skeleton of what looked like a large flying animal suspended from the ceiling, its bones carefully wired together in a job that would have made many a museum curator proud. The skeleton had originally belonged to a large bird, perhaps a tundra wan, Cygnus columbianus, which the proprietor or one of his friends had killed on a hunting excursion to the Outer Banks. Someone had removed the beak from the skeleton and replaced it with a long,

scrimshawed piece of bone that tapered to a point like a large needle. Around the neck of the trophy hung a wooden plank upon which someone had roughly inscribed the words 'Averasboro Gallinipper.'

The Nantahala National Forest covers over half a million acres in Cherokee and Jackson counties. Deep in the forest is a gorge cut by the Nantahala river, a gorge so deep and dark that the sun only shines fully down to its floor in the middle of the day. It's from this gorge that the whole region gets its name - Nantahala, a Cherokee word meaning "Land of the noonday sun." And at the bottom of this gorge, in a deep, hidden cave, lived U'lag‘û, the giant yellow jacket.

This is a Cherokee story. Long ago, at the beginning of the history of the Cherokee Nation, there was a town called Kanu'ga'lā'ǐ, which means "brier place." This was generally a prosperous and peaceful town, but it did have one very, very pig problem. This was U'lag‘û. U'lag‘û was a giant insect. Huge. The size of a house. His enormous size was how he got his name, because in Cherokee "U'lag‘û" means "The Boss" and U'lag‘û was big enough to boss around anyone he wanted. He moved through the air like no other insect or animal, darting, ducking, weaving, and hovering. He moved so quickly could be in one place one second and half a mile away in another.

U'lag‘û was hungry, too. It preyed on the people of Kanu'ga'lā'ǐ, appearing from nowhere, sweeping down from the sky to snatch children and carry them away. It moved too quickly for arrows to bring it down and flew too high and too fast to track from the land. The people tried many times to find its lair and destroy it, but with no success. Then one day, someone in the town had an idea how to track the U'lag‘û. They killed a squirrel and tied a very, very long white string to its body, then left it for the U'lag‘û to find. The giant insect appeared and and carried away the body of the squirrel, but moved too quickly to be tracked. So they killed a turkey and attached another long, white string to the body and left it for the U'lag‘û to find. It came and carried away the turkey, but still moved too quickly to be followed. They took the leg of a deer and tied a string to it, and the U'lag‘û came and took the leg but still moved too quickly to be followed. Then they killed a young deer. They tied the string to it and left the whole body for the U'lag‘û to find. And that was heavy enough that it had to fly slowly and and they could follow the long string as moved through the tops of the trees.

All the hunters in the village gathered together to follow the string. They chased over miles and miles and miles, until they cam to then end of the Nantahla gorge and saw the giant insect fly down into its depths. From their view at the top, they could see the U'lag‘û disappear into a cave at the bottom of the gorge. The men shouted and ran down into the deep valley after the beast. When they got to the cave, they saw many thousands of tiny versions of the U'lag‘û flying in and around the cave. Quickly, the men gathered brush and blocked the entrance. They set the brush on fire. The thick smoke blew down into the cave and choked the U'lag‘û and the tiny insects until they died. But some of the ones flying outside the cave survived and flew off, and that's how yellow jackets came into the world. The U'lag‘û seemed to survive this, as he is now said to reside in Cape-Fear. 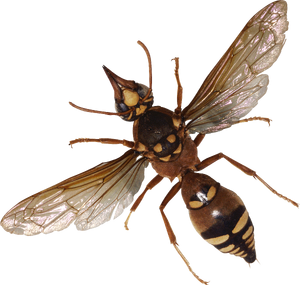 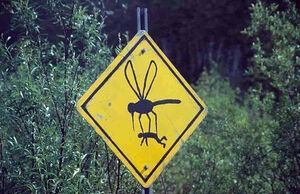