Avi is a supporting antagonist in the 2014 epic neo-noir crime film John Wick.

He is the counselor, second-in-command and friend of crime lord Viggo Tarasov. After Viggo's son Iosef has antagonized John Wick by stealing his car and killing his dog, Avi becomes entangled in the resulting chaos as well and is ultimately killed by Wick, who has started to dismantle Viggo's entire criminal universe in retribution.

He was portrayed by Dean Winters who also appears in the Allstate Commercials as Mayhem.

After Viggo has been informed that his son Iosef has killed John Wick's puppy and stole his car, Tarasov heads back inside his flat. He is welcomed by Avi, who tells him that business partners of his have agreed to Viggo's terms. When Avi congratulates Viggo, he realizes that Viggo's mind is elsewhere. Indeed, Viggo does not react to the news at all but only asks whether Avi saw his son around.

When Iosef is called before Viggo, Avi is present as well and jovially asks Iosef how his trip was. Avi is shocked when Viggo starts beating up Iosef for his idiocy and makes half-hearted attempts to stop Viggo, When Avi wants to leave the room, Viggo tells him to remain where he is.

Avi is present when Viggo later calls John Wick to make amends. He witnesses John hanging up on Viggo. Viggo then tells Avi to round up a crew. When Avi asks how many men Viggo needs, Viggo replies by asking Avi how many he has. The men are sent to Wick's house to kill him before he can start hunting down Iosef, but Wick brutally kills all of them. When Avi tells Viggo, Viggo orders him to put a bounty of two million dollars on Wick's head. He also orders to send Iosef to the club Red Circle as bait for Wick.

Avi is contacted by Ms. Perkins, an assassin of the Continental. She tells Avi that Wick is at the hotel and that she is willing to take him out, despite the Continental's rules stating that no "business" may be done on the premises. When Avi tells Viggo, he decides to reward Perkins' bold offer by doubling the price of the bounty.

The next day, Avi and Viggo are informed that Wick has attacked Viggo's private money stash and has burned it down. When they arrive at the church where the money was hidden, they are ambushed by Wick on the way out. Avi dives for cover immediately, hiding until Viggo's henchman Kirill takes out Wick by driving his car into him.

After Iosef has been killed by Wick, Viggo, Avi and some henchmen head to the house of Marcus, one of the assassins who was sent after Wick and deliberately failed all attempts to kill Wick as Wick is an old friend of his. They ambush Marcus when he comes home. Avi waits outside while Viggo beats up Marcus, who is eventually killed by Viggo and Perkins. When Viggo is done, Avi calls one of his men and tells him to fuel the chopper. Avi, Viggo and Viggos remaining men then head to the docks where they intend to escape Wick's wrath by leaving the city via helicopter.

Arriving at the docks, they notice that they are followed by Wick. While Viggo laughs insanely when he sees this, Avi panicks and asks in disbelief what is wrong Wick. He also asks for a gun. Eventually, they are forced to stop the car and send out the remaining men. While Wick takes out henchman after henchman, Avi frantically searches the car for a gun until he is handed one by Viggo. Taking the gun, Avi leaves the car, leaving the almost frightenly calm Viggo behind. Avi makes a run for the helicopter and fires his gun at Wick but is shot in the side by Wick. Wick then drives his car towards Avi, drifting so that he slams into Avi with the side of his car. While Avi dies of the impact, Viggo frontally drives his car into Wicks car, causing it to slide over the dying Avi and killing him. 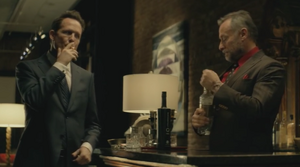 Viggo and Avi wait for Iosef 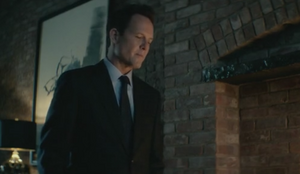 Avi is ordered to put a bounty on Wick

Retrieved from "https://villains.fandom.com/wiki/Avi?oldid=4329581"
Community content is available under CC-BY-SA unless otherwise noted.