Former right-hand-man of the Lord Commander

Obtain Specimen E-351 in order to free his son

Avocato is one of the protagonists of the 2018 adult animated series Final Space. He is a feline alien known as a Ventrexian.

He was voiced by Coty Galloway.

Avocato started off as the second-in-command to the evil Lord Commander and willingly served him without question assisting in actions such as killing hundreds of countless beings. One day, the Lord Commander decided to test the loyalty of his top lieutenants, and he forces them to kill their firstborn children as a sign of their loyalty.

The other lieutenants relentlessly obey the Lord Commander's order, but when it came down to Avocato's son, Little Cato, he couldn't bring himself to commit the act. Instead, he kills some of the lieutenants before turning the gun on Lord Commander.

Enraged, the Lord Commander imprisons Little Cato, and holds him as a bargaining chip with his treacherous former second-in-command, vowing to kill him if he ever failed him again.

Lord Commander eventually gives Avocato the task of acquiring Specimen E- 351, a gelatinous lifeform that the Lord Commander sees as the key to opening Final Space.

However, through an undisclosed mission, the Lord Commander became enraged. Despite this, he apparently allows Avocato another chance to acquire Specimen E-351 who unbeknownst to them was discovered by an intergalactic prisoner named Gary Goodspeed who christens the gelatinous lifeform "Mooncake" after a caterpillar he owned in his childhood. Avocato leads the attack on the Galaxy One, only to be captured by Gary.

Avocato discloses the truth behind Mooncake, but he gradually began to form a friendship with Gary, and Gary in return promises to help him rescue his son. After an encounter with the Lord Commander, Avocato is the one who offers to perform surgery on Gary after he had his arm ripped off by the Lord Commander's psychic abilities.

Along the way, the two become acquainted with Quinn, a member of the Infinity Guard. They trace the gravitational disturbance to a mysterious planet where it is revealed that the Infinity Guard had deflected to the Lord Commander's side and are aiding him in using a laser to create a breach, which would result in the Earth getting engulfed and everyone dying.

Galaxy One is able to destroy the laser, but the breach is far from being stabilized. Avocato receives a transmission from his son, and in spite of Quinn's insistence that they save the Earth first, Gary and Avocato leave to the prison planet Little Cato is being held captive at. To his horror, Avocato realizes that his son was being possessed under the Lord Commander's influence, leaving Avocato to desperately avoid having to kill his son.

Eventually, Avocato is able to get through to his son by giving him an embrace. As the team was heading back onto the Galaxy One, the Lord Commander telepathically plants a bomb on Little Cato. Seeing the bomb, Avocato immediately snatches the bomb and sprints towards another side of the ship, sacrificing himself. His broken body is last seen slowly drifting with the debris. 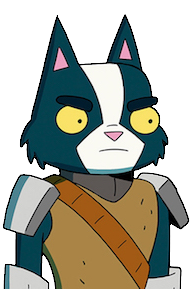 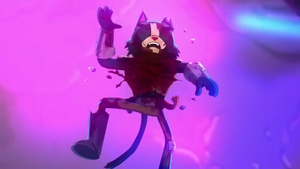 Retrieved from "https://villains.fandom.com/wiki/Avocato?oldid=3582597"
Community content is available under CC-BY-SA unless otherwise noted.