Aid Organization XIII with their goals and to gain a heart (originally; failed).

Figure out those who are planning to overthrow Organization XIII and eliminate them (Chain of Memories; failed).
To protect his friends (358/2 Days; failed).
To bring Roxas back by any means necessary (Kingdom Hearts II; failed).

Axel is a major character in the Kingdom Hearts series, as well as an anti-hero/anti-villain in the franchise. He is a pyrokinetic Nobody who originally served as the eighth member of Organization XIII. He is initially introduced as somewhat of a laid-back character, though he develops significantly over the course of Kingdom Hearts 358/2 Days and Kingdom Hearts II.

He was voiced by the late Keiji Fujiwara in the Japanese version, and Quinton Flynn in the English version.

Axel is tall, thin and light, with a large amount of bright red hair in spikes at the back. He has small, upside down teardrop-shaped purple marks underneath his bright green eyes. He wears the standard black Organization uniform, though his sleeves are narrower and his uniform is pulled in to accommodate his small waist. He is very rarely seen with his hood up.

Prior to his attempt to infiltrate Radiant Garden with his best friend Isa, Lea finds Ventus and cheers him up. After stating to a confused Isa his ideals, Lea attempts to sneak into Ansem the Wise's castle before they thrown out by Dilan. Years later, Lea's heart was removed from his body by Terra-Xehanort, creating Axel. Isa also received this fate, creating Saïx. Xehanort then recruited Axel, along with Saïx to be No. 7 and No. 8 in the new Organization XIII.

Chronologically, Axel is not seen again until the beginning of Kingdom Hearts 358/2 Days. Axel, along with Xemnas, introduces Sora's Nobody, Roxas, into the Organization as No. 13. Roxas later forms a friendship with Axel, and they repeatedly meet up on top of the Twilight Town Clocktower to share their favorite sea-salt ice cream after finishing the day's work. Axel is also partnered with Roxas on numerous missions. He jokes that the Organization has made Axel Roxas's "babysitter".

A few times in the game, Axel is sent to Castle Oblivion, looking for the Chamber of Waking, as well as both Replicas created by Vexen, and eliminating traitors to the Organization. While in Castle Oblivion, he meets Sora, who is not entirely sure if Axel is an enemy or a friend. He and Sora indirectly work together to defeat the other members of the Organization in the castle: Marluxia, Larxene, Vexen, Zexion and Lexaeus. Axel uses the Replica of Riku to achieve this, until the Replica is destroyed by the real Riku.

Some time after, Axel returned, and the first thing he did was find Roxas so they could have ice cream at their usual spot. Axel later befriends a perfect replica, modeled with Sora's memories of Kairi, named Xion, after Roxas introduces him to her. However, as both Roxas and Xion realize themselves and their roles, they become more distant from Axel.

After Xion deserts the Organization, Axel is ordered to hunt her down, though he doesn't want to harm Xion. However, he becomes irritated when he realizes both Xion and Roxas are cutting him off, and attacks Xion. He is unable to kill her, and only manages to knock her unconscious, and brings her back to the Castle. However, he then collapses from his injuries.

At the ending stages of the game, both Roxas and Axel lose contact with Xion. Roxas, confused and angry, leaves the Organization as well, greatly saddening Axel. Later, Xion appears in Twilight Town and battles Roxas with new power gained from Sora. After Roxas eventually kills Xion, Axel gradually forgets she ever existed. Axel is last seen in 358/2 Days when he receives a WINNER sea-salt ice cream stick from Roxas.

After losing a battle with Riku, Roxas is placed into a computer-simulated version of Twilight Town, created by DiZ, who also temporarily wipes Roxas' memories. Axel is tasked with returning Roxas to the Organization, so he travels into the virtual Twilight Town, and duels with Roxas and reveals key information about his past to jog his memory. Axel loses the duel, and is thrown out of the simulation by DiZ, who convinces Roxas that Axel was a dream.

Then, Axel enters the virtual world again, this time under orders to kill Roxas. He again attempts to restore his memory, but fails. He summons lesser Nobodies to weaken Roxas, then goes in for the kill. He is stopped by DiZ, who helps Roxas escape Axel. At this point, Axel realizes he has no choice but to obliterate Roxas.

He attempts to attack Roxas a third time, this time accompanied by higher-ranking Nobodies. However, Roxas defeats these Nobodies, and attacks Axel with dual Keyblades, named Oathkeeper and Oblivion. Axel is surprised by their power, and loses the battle. Axel falls back, and chooses not to carry out his mission.

After Sora awakens from his year-long sleep and rejoins with Roxas, Axel kidnaps Kairi from Destiny Islands, to try and draw Sora out so Roxas could be resurrected. However, Kairi proves more troublesome than Axel expected, and escapes to Twilight Town, where she hides from Axel. However, Axel finds her and hands her over to Saïx. Xemnas suspects Axel's motives, and thinks Axel will soon defect from the Organization.

In Hollow Bastion, Axel meets Sora again, revealing small bits of information about the Organization. Sora realizes that Axel is the one who kidnapped Kairi. However, when Axel confirms this, Saïx appears, prompting Axel to escape through a dark portal. It is that this point that the Organization confirms that Axel has defected.

When Sora attempts to travel to the Organization's headquarters, he is trapped by an army of Nobodies in Betwixt and Between. However, Axel arrives, and aids Sora in battling the Nobodies. Just when they are about to be overwhelmed, Axel uses an attack that uses up all his energy and his life force, utterly draining him. He does this to allow Sora to continue, as Sora is Roxas's whole form. After saying a last few words, he opens a portal to the World that Never Was, and finally dies.

Axel is reincarnated in his original form of Lea in the beginning of Kingdom Hearts 3D: Dream Drop Distance, and he looks exactly like his Nobody self, the only difference being Lea lacks the purple marks underneath his eyes. When he was reincarnated, Lea noticed that Dilan, Xaldin's Somebody, Even, Vexen's Somebody, Ienzo, Zexion's Somebody, and Aeleus, Lexaeus' Somebody, were also reincarnated. However, Braig, Xigbar's Somebody, and Isa were nowhere to be found. Lea searched the entire castle for Braig and Isa, but neither of them could be found. Ienzo suggested that if the two are not in the castle, then they could be at a place known as Traverse Town.

Sometime afterwards, Lea went to the Mysterious Tower to become a Keyblade Master. He used a Corridor of Darkness to get there. But about halfway there, Lea spotted Maleficent and Pete holding Queen Minnie hostage. Lea rescued Minnie by throwing one of his chakrams at the two. After Maleficent and Pete retreated, Lea exited the Corridor, wanting to help Sora and his friends, as well as wanting to see Yen Sid so he could be a Keyblade Master. While Sora and Riku were in the Dream Worlds, Lea was training with Yen Sid and the three Good Fairies.

Later on, Sora was captured by the True Organization XIII after being trapped in a deep sleep by Young Xehanort. Riku and Mickey tried to rescue him, but were restrained by Ansem, Seeker of Darkness and Xemnas. Luckily, Lea, along with Donald and Goofy, showed up to rescue his friends. During the rescue, one of the Organization members, wielding a familiar claymore, attacked Lea. His attacker's hood fell off, revealing that Saïx/Isa had sided with the Organization, much to Lea's dismay. Xehanort and his cohorts took their leave, allowing Lea and the others to escape.

When all of them returned to the Mysterious Tower, Riku decided that he should be the one to travel into Sora's heart to awaken him. Lea replied that he would help Riku should he fall into the darkness. After Riku was successful, Lea and the others were celebrating Riku for saving Sora. Shortly after Riku was appointed Keyblade Master, Lea claims that he'll catch up to Riku soon while revealing to them his intent to use a Keyblade. Trying to manifest it once more, Lea gets astonished when his Keyblade appears, which shocked everyone else as well.

It was later mentioned by Yen Sid that Lea is training to wield a Keyblade under Merlin and later in the ending of Kingdom Hearts: Birth by Sleep 0.2 -A Fragmentary Passage-, it is revealed that Kairi will be joining him in the training as well for the coming war.

Inheriting his persona from his original self, Axel is childish, competitive, somewhat smug, and sarcastic. He wishes for everyone he meets to always remember him, so he can live on forever through people's memories, saying "Got it memorized?" on multiple occasions. Though he is initially introduced as a laid-back character, he significantly develops, being willing to work together effectively with Sora, Riku and Mickey, and to take one for the team. He puts his personal agenda first, and everything else second. 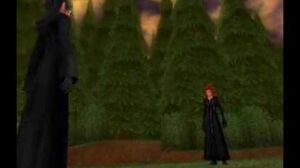 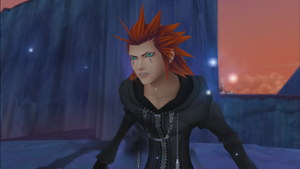 Retrieved from "https://villains.fandom.com/wiki/Axel_(Kingdom_Hearts)?oldid=4007451"
Community content is available under CC-BY-SA unless otherwise noted.