The horse (by Flynn Rider)
Maxelmus

To take over Max's place as the best horse in Corona (false goal).

Arrogant Rival
Axel is the minor antagonist of Rapunzel's Tangled Adventure who first appeared in the episode "Max's Enemy" as the main antagonist. He is a horse owned by Lady Caine.

Axel first appeared in the episode "Max's Enemy". Not long after Caine's arrest, Axel and a thief Dwayne formed a plan to get her out and steal Corona's gold that is to be transported in one swoop. To gain the trust of royal guards, the two put an act by staging a crime where Axel helped the guards catching Dwayne and lied that he had no home or owner. Feeling bad about him, they decided to place him in royal guard. Despite this, Maximus tried to hang out with him, but only made his life a living hell such as eating Max's hay after finishing his, stealing apple when Max is not looking and pin the blame on him, stealing Old Lady Crowley's flowers to give it to Fidella which ruined Max's chance to give it to her and get him in trouble, and stealing Max's bed which made him overslept.

The next morning, Maximus was horrified to heard that Axel has been chosen to be a horse on the royal guard. Not wanting this to happen, he tests Axel if he can qualified to join the guard. When Axel succeeds in doing better, Max trying to prove himself better than him, but failed to do so. As he had enough of him, Max challenges him to a race if Axel stays if he wins. During the race nears to the finish horse comes to a bridge, Axel pushes Max off the ledge causing him to fall into a mud pit below and wins.

Later that night, Maximus had a nightmare when Axel not only winning Fidella's heart and stealing his perfect life and friends, but his name too. After Max wakes up, he saw Axel trying to smuggling money, but he then wakes up Captain and Rapunzel not only smuggling money, but taking it to a cart down below which was his duty. Rapunzel scolds Max for his actions and sent him to bed. The next morning, when Max is feeling down about Axel ruining his life, he then notices a wanted poster of Axel and Dwayne. Max, horrified learning the truth, takes Axel's poster off and runs to confront him. But no sign of Axel and Max tried to find him until he fell into a trap Axel set up to him. Meanwhile, Axel sneaks to the prison not only Dwayne, but Lady Caine.

Axel packs Dwayne and Lady Caine in a money bag to put them inside a cart to make an escape. As the three make an escape, Rapunzel and Maximus catches up with them. As Rapunzel and Lady Caine fighting, Lady Caine dumps Dwayne off and Axel drops the the cart along with Caine which she was caught by Rapunzel, Flynn, and Lance. Maximus went off to Axel, but he tries to pushes Max into the mud. Maximus then uses a trick to leap over Axel, causing him to fall into a mud pit below. After that, Axel and Caine are arrested for their actions. 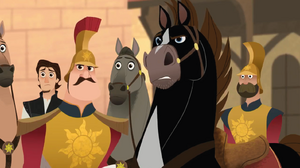 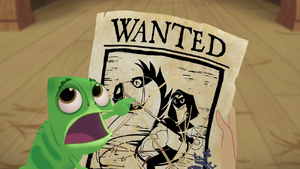 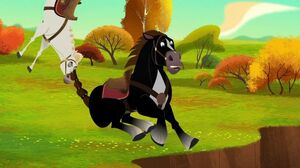 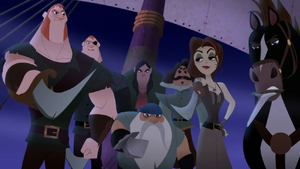 Retrieved from "https://villains.fandom.com/wiki/Axel_(Tangled)?oldid=4072543"
Community content is available under CC-BY-SA unless otherwise noted.