Leader of the Black Knights

Axel Gear is Sparkster's rival and a major antagonist in the Rocket Knight video game series. Sparkster defeats him, but somehow, he always comes back.

Axel Gear was taken in by an old fellow named Mifune Sanjulo. Mifune taught Axel Gear the ways of being a Rocket Knight. Mifune then adopted another child, Sparkster. Axel was jealous of Sparkster, as Mifune always liked Sparkster best. After years and years of hate, Axel finally killed Master Mifune and stole a secret book of Rocket Knight techniques. With it, he brought together the Black Knights, Rocket Knights that went rogue. Sparkster and Axel Gear clashed in an epic battle, which Sparkster emerged the victor. Sparkster banished Axel from the kingdom, and Axel Gear went into hiding.

Axel Gear eventually returned again, this time working for King Gedol and the Gedol Empire. Axel Gear kidnapped Princess Cherry, the cousin of Princess Sherry, and fought against Sparkster, only to be defeated again.

Axel Gear later allied with Generalissimo Lioness and her army and aided them in their conquest of Zephyrus. He was defeated again along with the rest of Lioness' army.

Axel Gear wears red armor. He has a purple sword, and a jetpack on his back. His sword has eight prongs on it, four on each side. There is a cable that is attached to his jetpack, allowing him to shoot fire out of his sword. Axel Gear's black hair runs out of his helmet.

Axel Gear makes bosses and cameos appearances in the Games and TV:

Rocket Knight Adventures, released for the Sega Genesis in 1993.

Sparkster (SNES), a game that was released for the Super Nintendo in 1994, unrelated to Rocket Knight Adventures 2.

Yume Parodius DX (Anime 2002-2006), In the Island Conquer Penguin, and the Asumenent Park, Axel Gear makes cameo appearance in the Galan Penta Eye's Concrete Spectacular to bidding a the Villains of Konami Videogames.

Rocket Knight, a game that has been released for Xbox LIVE Arcade, PlayStation Network, and Steam on May 12, 2010. 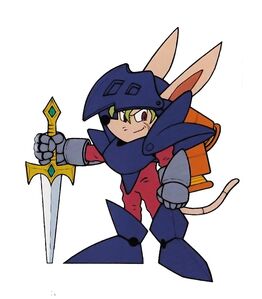 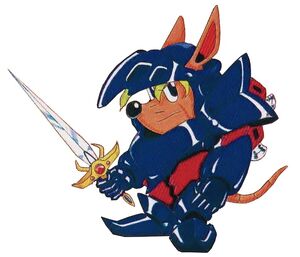 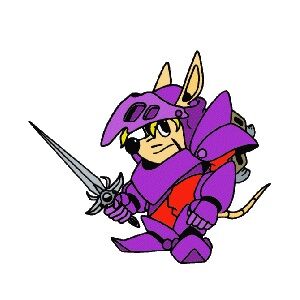