NOTE: This article is about the incarnation of The Trickster from the Arrowverse. The mainstream version can be found here: The Trickster (DC).

Get rich from attacking the mayor's fundraiser

Axel Walker, also called himself The Trickster, is an antagonist in the first season of The Flash, where he frees his father, the original Trickster, from prison. He returns in the fourth season where he wreaks havoc with his mother, Prank.

He is portrayed by Devon Graye.

After having been imprisoned, the Trickster startet contacting his son Axel through letters, grooming him to be an ideal sidekick to him as The Trickster. For the next 10 years, they continued to talk and became close.

To fulfil his father's plan, Axel appears in Central City as the new Trickster. He appears on the roof of a skyscraper and releases bombs hidden inside parcels. The parcels parachute to the ground near a playground, exploding upon impact. The shocked parents quickly flee from the playground with their children but one child remains behind. The Flash arrives and saves the boy before he is blown up. The Trickster then sends a video to the media in which he claims that he has returned to destroy the city with his disorder.

Barry is told by Joe West that 20 years ago, James Jesse who called himself "The Trickster" caused havoc in Central City and is now serving multiple life sentences in Iron Heights. Barry and Joe go to Iron Heights to visit Jesse. There, Jesse tells them about his old hideout and that he had hidden a bomb destructive enough to annihilate Central City. Arriving there, Bary and Joe find the lair empty. Barry is then called and told that the new Trickster is adressing Cental City. Barry opens the video on his cellphone and shows it to Jesse, who, at first furious, breaks down crying upon seing that the new Trickster is wearing his mask.

While the police and the Flash are looking for the bomb, Walker breaks into Iron Heights. When Barry and his team find out, they realise that there never was a bomb and that Jesse is in league with the "New Trickster" and only acted like he wanted to get him caught. Walker frees Jesse from his cell and they escape from Iron Heights with Barry's father Henry as a hostage.

They then return to a hideout, where Jesse starts building new devices to terrorize the city. When Walker claims that he is glad that they are finally in the same room as he is Jesse's biggest fan, Henry claims that Jesse is only using Walker. Walker asks Jesse why they have to bring Henry along and Jesse tells him that having a cop's father as a hostage makes for an excellent bargaining chip. When asked by Walker what his new plans are, Jesse says that he had twenty years to come up with the perfect trick and that it will be his masterpiece.

Walker then claims that he always wanted to know why Jesse chose him to help him. Jesse reveals that he is Axel's father and that he wants Axel to continue his legacy.

Jesse and Walker then invade a fundraiser of Central City's mayor, disguised as waiters. After everyone inside has received a glass of poisoned champagne from them, Jesse walks onto the stage and adresses the crowd. He tells them that he has poisoned their drinks and that they will start to feel the effects in about one hour. At that moment, a guest falls to the ground and dies. Jesse claims that he remembers the man, he arrived an hour earlier and was the first one to receive a glass of champagne. Jesse then tells the crowd to call their bankers and transfer all their money to the bank account number which is written on the bottom of their glasses. He claims that if all the money is transfered, he will give them the antidote. One of the guests, Iris West, secretly calls her father Joe and so, Barry finds out where Jesse is. Arriving there, he grabs Jesse and smashes him against a wall but Axel approaches him from behind and places a bomb on his arm. Jesse then claims that, like in the movie Speed, the bomb will go off if Barry runs slower than 600 mph. He then activates the bomb, forcing Barry to run off.

However, Barry manages to get rid off the bomb and returns to the fundraiser, injecting every civilian there with the antidote. He then demands to know the location of Henry Allen, and Jesse tells him. Barry arrives in time to save Henry from the trap.

Years later, Barry is sent to Ironheights Prison for the murder of Clifford DeVoe. In the yard, he meets Axel Walker whom he recognizes. Axel, of course, does not know Barry and introduces himself to Barry but Barry replies that he knows, because Axel and his dad kidnapped Barry's father once. Axel wants to know about Barry's murder of DeVoe but Barry states that he is innocent. Walker sarcastically implies that everybody in the place is innocent, pointing at one of the inmates and claiming that this one is especially innocent. However, Axel suddenly feels weak, which he blames the joghurt he has been eating for. He stumbles off for the infirmary.

After Axel has arrived at the infirmary, a nurse suddenly attacks the guard that brought Axel with a tranquilizer and is revealed to be Axels mother. The two flee from Iron Heights, tranquilizing two other guards on their way out.

Prank brings Axel to the run-down headquarter of Clark Toys, where Axel realizes that his escape made the news. He calls it awesome but Prank reveals that it is most certainly not because now, the police is looking for him. She states that they will be out of the city soon and Axel wants to know whether they will join his father and expects that this is why Prank broke him out of prison. However, Prank replies that this was not the reason, she simply wanted her son back in her life. Axel wants to know about his father but Prank coldly tells him that Jesse broke out of prison a year ago and has not made any effort to contact them since. Axel is insulted but Prank sits down next to him and tells him that he does not know Jesse like she does, calling him a deadbeat. She reminds Axel that while he grew up idolizing his father, she was the one who took care of him all the years. She states that she never wanted for Axel to grow up like his dad but Axel simply replies that it is too late. Planning to get his father's attention by attacking Central City's newest hero - the Elongated Man, Axel leaves the room while the shocked Prank calls out for him to come back.

Axel soon sends a new message to Central City in which he blows up a taxi and treatens to cause even more chaos if the "Stretching Man" is not delivered to him. Even while Axel is sending his message, Ralph Dibny is breached over to him. Axel hurls even more of his explosive bouncy balls at him but Ralph is unaffected by them. A little more desparate, Axel uses more of his toy tools before finding a weapon that can actually hurt ralph - a water pistol shooting acid. As Ralph panics, Cisco breaches over onto the street and blasts Axel away with his powers. He brings Ralph back through the breack before Axel can fire his gun again.

Axel returns to the lair, where Prank wants to know whether Axel is okay. Axel replies that he is not, because "Stretching Man" is still alive. He states that all his father will see is that he failed and that his father will never want to see him. Prank, however, states that Axel will be a far better Trickster than Jesse ever was and reveals that she did not take her medication and has thus returned to the more playful albeit more dangerous Prank-personna. In another video broadcast, Prank and Axel announce their newest maniacal plan to the city which they have dressed up like a gaming show. The two reveal that they have hostages and an acid shower and that they want the "Stretching Man" to come to their show as a special VIP. Prank reveals that the Stretching Man has one hour to show up, otherwise the hostages will die.

Killer Frost and Cisco arrive at the game show where they plan to free the hostages but are surprised when the hostages are revealed to be Prank and Axel. The two quickly strap meta-human dampeners on the two, rendering their powers useless.

Before they can decide how to kill the two, Ralph arrives and although Prank orders Axel to kill them, he is swiftly defeated. After seeing her son fall, Prank activates the acid shower to at least kill Cisco and Caitlin. However, Ralph stretches over them to shield them from the acid. After the two are saved, Prank and Axel are taken by the police. As they are led to the car, Axel states that it was fun and asks his mother if they will do so again in fifteen to twenty years. Prank laughs and reveals that she will break them out in two. 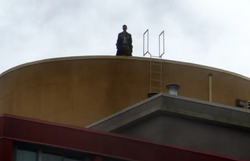 Axel watches the explosions of his parcels 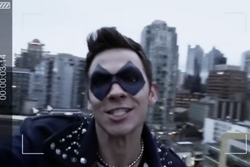 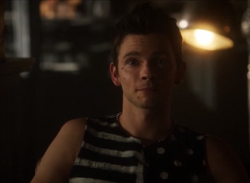 Axel is told that Jesse is his father

Jesse and Axel pose as waiters