Second-in-command of the Melee Fight Crew

Tormenting and taunting others.

Ayaka Kamimochi is a major antagonist in the manga series Gakkou Gurashi! She is a student and member of the Melee Fight Crew. She is a psychotic teenager who takes great pleasure in killing both zombies and humans alike. She is the secondary antagonist of the University Arc.

According to Aki Hikarizato, Ayaka is usually seen with a serious expression and doesn't make much emotion. But she initially showed be an intelligent, mature, calm and responsible person. However, in chapter 47, she is a sadistic, delusional, and treacherous teenager who believes that the world was meant for her and hers only, as she "chosen" and do whatever to survive the apocalypse. She is also murderous, as shown in her flashback torturing and killing a zombie with a smirk on her face and takes great pleasure in killing humans as well.

Little is known about Ayaka's past before the outbreak. She was a normal student and a loner who hated school. She usually sat alone and always stated that every day was the same and future was to.

When the outbreak started, Ayaka felt free from the boredom and she could do anything she wanted. Since then, she has come to love the new world, calling it a cool world, which something that others couldn't understand. Ayaka stated she survived because she was "chosen" and promised herself to never die and also stated she was "invisible".

She is first seen along with other members when Touko was letting Kurumi know that they have been talking to the Melee Fight Crew.

After Sino returns from killing zombies, Ayaka comes into her room and did a body check on her. She asked if Sino found something new, she replied that she didn't as usual. But Sino was extracting some blood samples from the zombies before killing them and contained the blood in a serum, to which Ayaka commented that it's dangerous.

Ayaka is later seen in another meeting about the School Life Club. Ayaka suggested that they could go to another place when they have a destination. But she then said that 'when' they went, there was nothing and not enough resources. Takahito then explains that they needed information and told them they were going to research the School Life Club where they're from and what they saw. Ayaka then replies if that worked Renya Kougami didn't miss his attack towards the club.

After Sino lures Renya into the graveyard after he gets infected, the Melee Fight Crew members gathered. Ayaka sees Sino sad and tells her to come along. As the air appeared to be gloomy, Ayaka asked Sino which time Renya died, Sino replies that he went out six days ago. The group then making assumptions about how Renya died. Ayaka wondered if it was suicide, Sino quickly denies this, which shocked Ayaka. They then decided that someone had infected with zombie blood. Later, Takashige Shiromoto starts to panic and said he didn't do it, to which Ayaka replies that nobody said it was him.

The group has another meeting about the School Life Club and Fallen Crew the following day. Ayaka, with a grim smile on her face, says that it was they who did it, causing the group to attack both groups to get revenge for Renya, specifically getting resources and information from the School Life Club. Ayaka sees Sino looking down and asked her if she didn't feel happy since they were going to get revenge for Renya, to which Sino agreed. Aki Hiksrizato tells Miki Naoki about Ayaka being uneasy and very dangerous.

The group started their plan, first going to the library where Rise was alone. Takahito tells her that he wants to know about the School Life Club and come with the group. But she tells them that they should hear them from themselves as she'll introduce them to the club. Takahito says he can't talk with Rise. Ayaka asked her if she knows the pain of losing a loved one, which Sino reacts to. Ayaka lights a cigarette and tosses it, to which Rise jumps down and puts it out. Only to be tricked by Ayaka, who pointed her crossbow to Rise.

Ayaka asked Takahito about talking to Rise, he replies that she didn't know anything and orders her to tie her up and to be prepared as they were going to leave as soon as Takashige returns. After he leaves, Ayaka wondered why he looked grim and never smiled. Later, Ayaka, Sino and Takahito continued their plan and capturing and threatening Hikako Kirai to not make a sound.

Ayaka and Sino are later seen capturing Touko Deguchi and Aki Hikarizato. They held them as hostages and threaten to kill Kirai if they make any more noise. As Aki sees Ayaka holding Hika's music box, she became surprised. Yuki heard the music from the music box and follow the sound, but becomes shocked as she saw the Melee Fight Crew. Takahito tells Yuki Takeya not to scream, but she ignores him and does very loudly. Waking up Miki Naoki, who scrambles around for Rii-san. Ayaka tells them there are only four left.

Later, Ayaka trips Rii-san and Ruu while they were taking refuge since they heard Yuki's scream. Later, Sino captures Miki and meets up with Ayaka and captured Yuuri, who becomes very angry once she was separated from Ruu Wakasa. She started to panic and shouted for Ruu. Ayaka walks up and places her foot on top of Yuki's head, asking if Yuuri was so precious to her. While Yuuri continues to scout for Ruu, Ayaka gets annoyed and tells Sino to take her away. As Yuuri was done, Ayaka and Sino took her with them and leaves Ruu behind, who is revealed to be Yuki's teddy bear, Guuma-chan.

Ayaka enters Takahito's dorm and finds wide awake. She tries to figure out what he was thinking about, but he tells her he wants to think alone and Ayaka leaves him be.

The Melee Fight Crew now talks to the girls. Ayaka asked them why they didn't run away together. Touko replies that she wanted to talk, Takahito then accuses them of murdering Takashige. While he hesitates to say something, Ayaka tells them that Kougami never said anything and only did a warning shot, to which Touko confirms this and that the disease mustn't require direct contact. Takahito begins to shout, only to be interrupted by Aki, who tells to stop blaming them without evidence.

Touko understands that he thought the newcomers could have done it, she changes the subject to the need for communication, but Takahito denies this since they were prepared to leave in the middle of the night. Confused by what he meant, Ayaka tells them that they "were leading up the camper." Touko realizes that really needed to spend more time talking to each other. Ayaka now believes this fits the last piece of their puzzle. Takahito grabs Touko by her shirt and accuses her of putting poison in the group's water. As Ayaka tries to calm him down, he continues to accusing Touko of this and demands an antidote. Suddenly, this causes everyone to realizes that Takahito is infected. Sino begins to strike in an attacking pose, while Ayaka reminds Takahito it was him who made the rule to kill anyone who is infected, who then flees from the room.

Later, Ayaka is seen looking down with some binoculars. She then thinks of what Takahito did was interesting and goes to the broadcasting room. While Rii-san was outside and heading towards a doorway, the fire alarm goes off, setting off by Ayaka, who was smirking about it.

After taking out a few zombies, Sino becomes exhausted. Suddenly, Ayaka appears and tells Sino that what she just did was dangerous. She then replies that it would be best to ensure that no one survives without a trace. Sino tells her that she might die, to which Ayaka replies it back to her.

While Takahito flees from the group, he heads to the graveyard and goes on top of the wall. He looks down and sees the zombies. He trips backward and sees a hand, Ayaka's hand. He tells her that Sino betrayed them, but then says it wasn't the last of them, as long as he and Ayaka survive the apocalypse. Ayaka looked at his injuries and asked about his injuries, to which, he says someone must have and which why he was "chosen". However, Ayaka pushes Takahito and claims she's the chosen one. She burns the body and leaves the graveyard.

Outside of campus, Ayaka finds a van and drives away. She repeats that the world is truly a beautiful place and that it only existed for herself. While driving, the van breaks down and the zombies approached her. Before getting out, she thinks to herself that she won't be the one dead because she is the "chosen".

When Yuuri Wakasa tries to draw the horde of zombies away, she encountered a zombified Ayaka and is shocked to see her as a zombie. Yuuri quickly regains her composure and shoved her away. 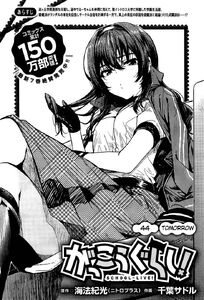 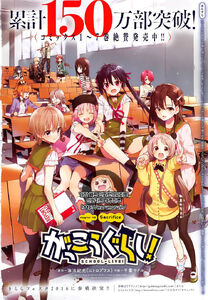 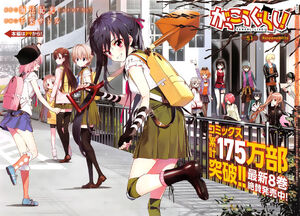 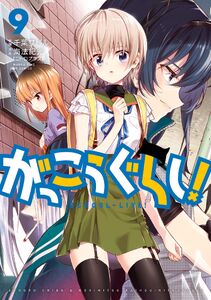 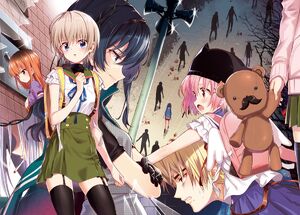 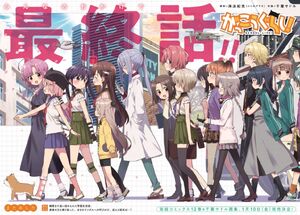 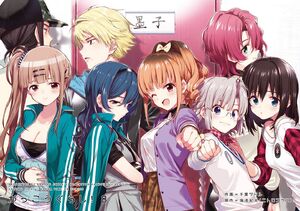 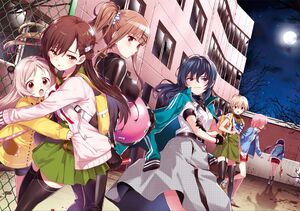 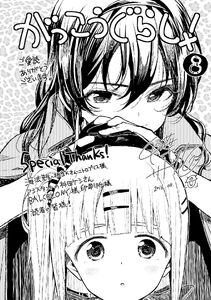 Add a photo to this gallery
Retrieved from "https://villains.fandom.com/wiki/Ayaka_Kamimochi?oldid=3895075"
Community content is available under CC-BY-SA unless otherwise noted.