Ayanami, also know as Krowell Raggs, was the main antagonist in 07-Ghost series. He was the leader of the Black Hawks squadron and a famous and strongest military strategist.

He is the CEO of Barsburg Army's Chief of Staff and well known military and respected throughout the Empire for his actions, especially when his actions are extremely cruel, cold and considered inhumane, he is not only respected but much feared for all people who consider themselves his enemies, he is known as the crazy guy who already existed, being responsible for the death of millions and millions throughout his career as a soldier, being constantly shown in a negative way down his back.

He is voiced by Shō Hayami, who also provided the voice of Sosuke Aizen .

In his human form and as a military, he is very dedicated to his profession as a soldier and and loyally follows his goal to protect the country and serve his country, willing to kill and even die for what his believe is necessary for the good of the people. He is a person with great sense of nationalism and also the nacionalism is the main motivation of his actions, Ayanami shows also have a great honor and respect for those who are willing to make sacrifices for their country or serve the people.

He is always calm, polite, sophisticated and gentle good, he rarely shows any facial expressions and always speaking in a monotone and serious tone. However, when involved with people he dislikes, sometimes he talks to them rudely and a bit arrogant. He occasionally shows a evil sense of humor, and always generates a dark aura surrounded the people who are not related to him somehow.

Ayanami is a meticulous and organized man, he even tends to sort his waste before disposal, and likes to complete his job quickly and perfectly. He often prefers to work in silence and alone, and do not like when someone distracts him during his working hours, however, if anyone distract he during his work or if his subordinates do stupid things that could irritate him, Ayanami quickly lost patience and is always able to use violence to discipline his soldiers.

He does not change his behavior or out of his way and not rarely shows other expressions such as fear, anger, despair, or much less take his menacing smile in order to impress or please his superiors, and the opinions and comments of others hardly affect him. However, Ayanami does seem very sensitive when someone mocks his family or someone he really cares, as he was very offended when the King Antwort ironically referred to him as "low-born", being quite willing Ayanami to sympathize with his situation, until he had said.

Despite his cool demeanor, Ayanami is aware of the feelings of his subordinates and wellness. Despite trying to maintain professional relationships. Ayanami not show kindness to his fellow Black Hawks. Despite he being cruel and cold, he is also shown not to be such a cruel and evil as everyone sees him, he will try his to protect the Black Hawks and his followes from the evil, and will risk his own safety to help them if he feels the situation has become very dangerous for them. Ayanami occasionally displays a soft side to his subordinates, especially Yukikaze in the past and in the present Kuroyuri and Teito. He is also fair to his subordinates, and does not practice favoritism. He is rarely caught off guard and surprise shows only when his opponent is stronger than he thought. He is also very patient waiting more than ten years until the right time to carry out his plan to remove Major General Ogi time. Ayanami can be very cunning and manipulative and a master of the intelligence. Ayanami has great respect for the power, as his motto is "Justice without power is futile."

Ayanami has a method that makes it never loses his composure, even though he was tortured he does not change his behavior, always being serious and calm even in the face of death.

He agreed with the opinion of the Marechal de Carvalho that the best way to protect Barsburg losing their current territories is to exterminate all wielders of the Eye of Mikhail, with the goal that no one can make use of the powerful Eye to threaten Barsburg, however, throughout the series, Ayanami prioritizes Barsburg less loyalty to the empire, and he begins to use his position as Chief of Staff to search for the body of Verloren. He shows increasing willingness to commit acts of treason even he declaring himself with a loyal soldier to the country.

Ayanami is the reincarnation of Verloren and because of that, his personality had a considerable radical change. Despite Ayanami being calm and composed when he is in the form of Verloren he is in control of what he seems strangely eccentric and psychotic, his behavior is irrational and he grins wildly as a psychopath. Different from the normal behavior of Ayanami, Verloren is impulsive and reckless in his actions, a feature that is not normally associated with Ayanami in human form.

Due to the Verloren crippling insanity, the madness seems to have affected Ayanami, Hyuuga with noting that Ayanami is often unable to sleep at night because of the nightmares he experiences due to madness and insanity of Verloren, which is just one of conseguences for him be reincarnation of this demon.

One of the most remarkable abilities of is his intelligence, earning him the nickname "The Empire Barsburg number one genius." This, along with how quickly he rose through the ranks of the armed forces reflect his cleverness and cunning, and as a military strategist who is also respected and feared by all of the hierarchy, he the mastermind behind most of the country's military plans but also serves the country facing the battles, and the "brain" and the "sword". He is a master manipulator, and is able to find and exploit weaknesses in defense or attack enemy style with extreme ease, and his plans are well thought out and elaborate, almost impossible to be descovery or stopped in time, however, even when his plan A fails, he always have a plan B if things go wrong.

With this ability Ayanami can recover from injuries and wounds at inhuman speed, however, with the price of shortening his life expectancy in general. An example of its rapid healing was shown when he was able to heal a wound on his cheek in a matter of seconds and when he regenerates the arm that had been torn from him in seconds.

It is considered the most common attack Ayanami is able to harness the power of a Zaiphon and proves very adept at using it and also use it in combat fairly short distances. The attack can take many forms, such as defense and attack, however, it is mainly used to attack - but has shown the ability to put up shields to block attacks from enemies. Ayanami proved to be incredibly powerful to destroy the barrier that protected the city of Antwort with a single attack of his Zaiphon

Attacking Zaiphon: Ayanami uses most of its powers to attack enemies inves simply defend and stay in defense, usually throwing rings that explode in a big on impact. Ayanami also uses the attacking Zaiphon cutting attacks from opponents in half, so that both sides of the opponent's attack Zaiphon miss him.

When Ayanami is in Verloren form he also acquired new skills of Verloren, however, he can not use them in his full strength, due to the fact that he is in a human body.

Verloren devoured Vertrag's  soul and because of that Ayanami has the ability to use souls and mainly handles them, making a contract.

Although it has not been shown, Hyuuga mentioned that Ayanami has the power to Lance to see the past, which allowed him to discover that Ayanami Katsuragi was the traitor in the Black Hawks.

Ayanami is able to command Verloren's scythe, a huge scythe in the dark and demonic format.

It is a skill that is still imperfect. Ayanami can tie souls together. He used this ability to revive Haruse tying his soul to the Kuroyuri. 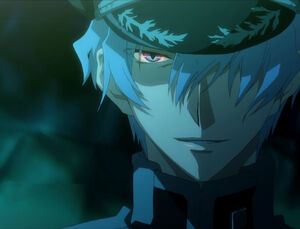 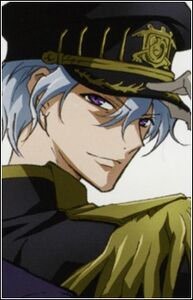 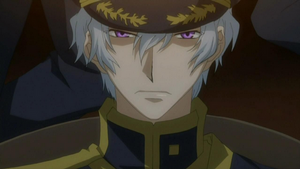 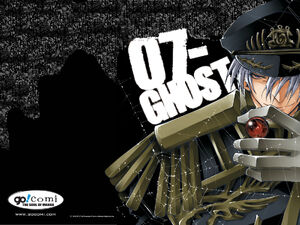 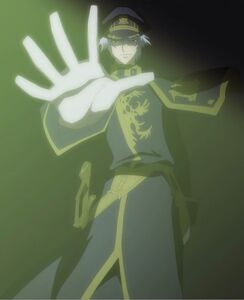 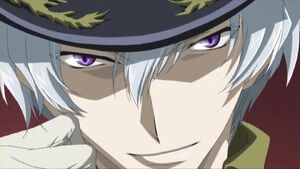 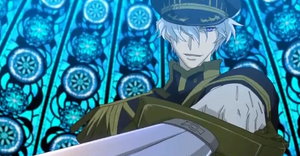 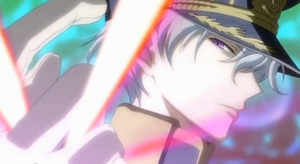 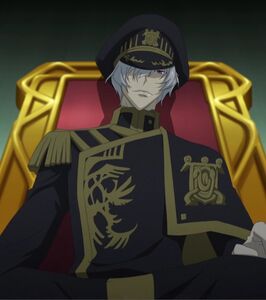 Ayanami in his Throne 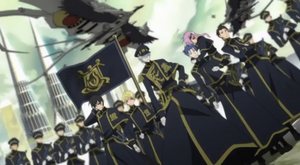 Ayanami and the Imperial Army 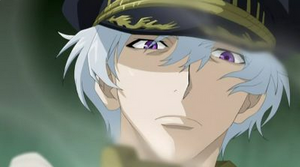 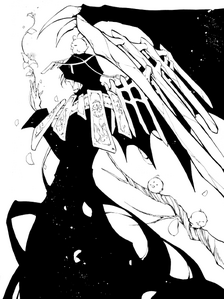 Retrieved from "https://villains.fandom.com/wiki/Ayanami?oldid=3203600"
Community content is available under CC-BY-SA unless otherwise noted.