Ayel is the secondary antagonist of the 2009 sci-fi action adventure film Star Trek. He was a Romulan miner and Nero's second in command on the Narada.

He was portrayed by Clifton Collins Jr., who also played Cesar Vialpando in Grand Theft Auto: San Andreas and "Lawrence Gonzalez" in Westworld.

When the Narada goes back in time to the year 2233 and attacked the USS Kelvin. Ayel contacted the Kelvin and had Captain Richard Robau come aboard the Narada and negotiate a cease fire. When Robau comes aboard Ayel speaks for Nero questioning Robau about the whereabouts of Ambassador Spock and his ship. Robau says that he is does not know him and that the year is 2233. Ayel later witnesses Nero kill Robau and helps resume the attack on the Kelvin.

25 years later in 2258 in the alternate reality, Ayel assisted Nero in the capture of Spock and his ship and the destruction of Vulcan. Nero had Ayel prepare the red matter from Spock's ship, which is used to make a black hole, which destroys the planet and kills most of their inhabitants. When James T Kirk and the younger Spock invade the Narada as it attacked Earth, Ayel attacked Kirk in a surprise attack allowing Nero to attack and nearly kill Kirk. When Nero hears that Spock has destroyed the black hole drill, he leaves Ayel to take care of Kirk while he goes up to handles the situation. Ayel is killed when he gloats to Kirk how humans are weak and how it is going to be easy to kill him. Unaware that Kirk manages to take his gun while he is gloating. Kirk shoots Ayel, who then falls to his death into the abyss of the Narada 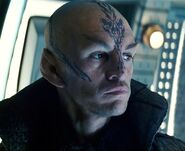