Ayesha is the secondary antagonist of the 2017 Marvel film Guardians of the Galaxy Vol. 2.

She was portrayed by Elizabeth Debicki, who also portrayed Victoria Vinciguerra and Mina Jensen in The Cloverfield Paradox. 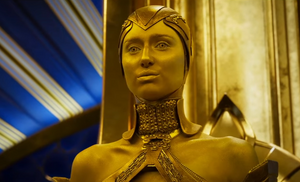 Retrieved from "https://villains.fandom.com/wiki/Ayesha?oldid=3080467"
Community content is available under CC-BY-SA unless otherwise noted.