Strength
Flexibility
Can increase his size and strength

Giant Monster
Ayon is a minor antagonist in the anime/manga Bleach. He serves as Tier Harribel and her Fracción's disobedient "pet".

Ayon is a giant monster. He strongly resembles a chimera. Ayon has the tail of a snake, the body and mane of a lion, and the legs, and horns of a deer. His Hollow hole's location is unknown. The Bone fragment resembles a deer skull with the antlers.

After Emilou Apacci, Franceska Mila Rose and Cyan Sung-Sun entered their released form, one of them recommended to have their pet fight the Soul Reapers. So all three of them decided to sacrifice their left arm and used their Quimera Parca technique. With this technique, they were able to summon their "pet"; Ayon. At the very start, Ayon refused to listen to any of the Fraccions for whatever reason.

At the very start, Rangiku felt nervous, just looking that this beast made her feel very uneasy.

Rangiku attempted to attack Ayon, but Ayon managed to strike Rangiku, nearly killing her. Momo tried to heal Rangiku, but Ayon appeared behind Momo, and with a single punch, Ayon broke nearly every bone in Momo's body.

Just when Ayon was about to kill both Rangiku and Momo, both Shūhei Hisagi and Izuru Kira arrived in time and rescue Momo and Rangiku. Hisagi told Kira to heal the wounded, while he wound fight Ayon on his own.

Hisagi managed to wrap his Shikai on Ayon's neck. But instead of fighting back, Ayon was just looking at his weapon. Hisagi realized that Ayon was not very smart. While he was distracted, Hisagi managed to flip Ayon onto the ground, but it barely did anything. Ayon easily flipped himself back up with little to no injuries. Eventually, Ayon easily breaks the chains and attacks Hisagi.

He managed to grab Hisagi and was crushing him with his bare hands. Ayon eventually reveals mouth and attempts to eat Hisagi. While he was distracted by Hisagi, Tetsuzaemon Iba attempted to attack Ayon from behind. However, Ayon opens his hidden eye from beneath his mane. Ayon processes to fires a Cero out of his eye and shoots it into Iba, engulfing him.

Deciding not to eat Hisagi, Ayon processed to slam Hisagi against a wall. Ayon continued to crush Hisagi until he became unconscious. Ayon releases an unconscious Hisagi and processed to walk towards Kira, who was still healing both Rangiku and Momo.

Just when he was about to attack them, someone shoots a large hole right through Ayon's chest. It turns out that Genryūsai Shigekuni Yamamoto was the one who shot Ayon in the chest. For unknown reasons, Ayon processed to pound the hole in his chest multiple times, until he became enraged. Ayon's mouth and both his eyes are revealed, as he grew more and more enraged. The hole on Ayon's chest completely heals. Ayon started to grow at a tremendous size.

The first body part that started to grow was his right arm. He proceeded to attack Yamamoto but the Yamamoto easily catches Ayon's arm and asked himself what that was supposed to do. Yamamoto tossed Ayon easily while saying, that he's nothing but a being that of thinks of nothing but killing. Yamamoto then tried to end Ayon by slicing Ayon in half with his Zanpakutō; Ryūjin Jakka's technique; Nadegiri.

However, Ayon somehow survives and continues to attack. Yamamoto tells him to stop, but Ayon refused. Yamamoto finished Ayon off by engulfing him in flame, killing him once and for all.

Ayon has no real personality, but Yamamoto proclaimed Ayon as nothing more than a mindless monster with no goal other than to kill everyone in his path. Despite being a "Mindless Monster", Ayon is actually very cunning because he was able to feign defeat from Hisagi's Kidō, luring him into an attack. And for whatever reason, Ayon refuses to obey Apacci, Mila Rose or Sung-Sun's orders.

Ayon is a very powerful Arrancar with extremely high spiritual pressure. Ayon has extremely high strength, durability, endurance, and even speed. Ayon has accelerated healing factor and minor shape-shifting. Despite his massive size, Ayon is actually very flexible. He's able to twist his neck 180 degrees, much like an owl, while he has a chain wrapped around his neck, and even twist his arm to punch someone.

Ayon also shows an immunity towards Kidō spells. Like nearly all Arrancar, Ayon can produce an energy beam made out of spiritual pressure known as a Cero. Ayon Cero is red can produce his Cero out of his eye (Both eyes in Bleach: Heat the Soul 7). Ayon's most powerful ability is known as El Martillo. When Ayon becomes enraged, his size increases tremendously, as well as his strength and spiritual pressure. 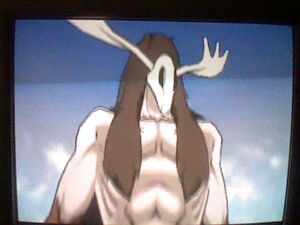 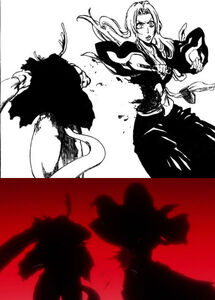 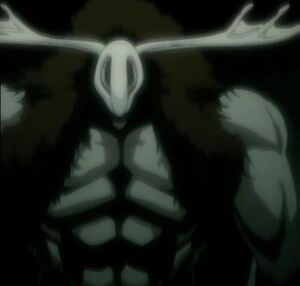 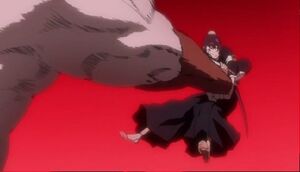 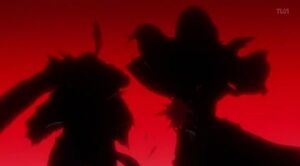 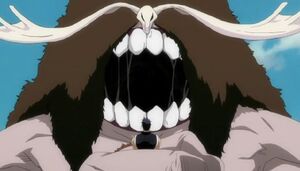 Ayon about to consume Hisagi 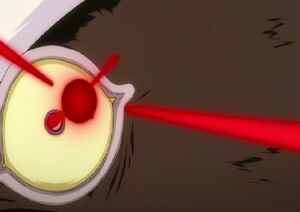 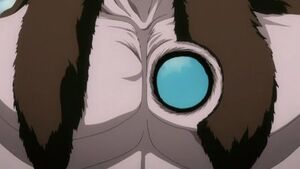 Results after Ayon getting shot by Yamamoto 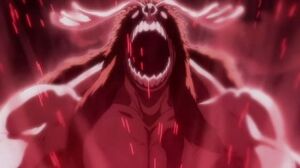 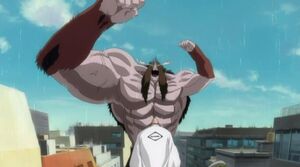 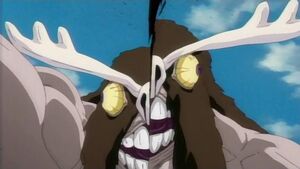 Ayon getting sliced in half by Yamamoto 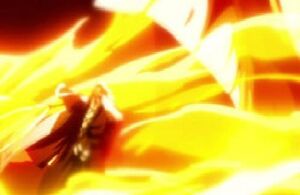