Az Atorse is the final boss from the videogame Magician Lord.

The demonic God of Destruction, Az Atorse was once summoned by the evil sorcerer Gal Agiese to lay waste to the world so he could conquer it, but both of them were defeated and subsequently imprisoned into eight magical tomes by the Magician Lord.

Centuries after that, Gal Agiese breaks free from the seal and once again awakens Az Atorse, intending to resume his plans. Elta, last descendant of the Magician Lord, goes after them to retrieve the books and imprison them again.

Before the fight with Az Atorse, Elta can choose one of his transformations.

Az will float around the arena, shooting lasers and sending homing drones.

Once his spikes are destroyed, he will start floating on the middle and create a shield of yellow spheres surrounding him which he can shoot to cover the screen. Once the shield is destroyed Az is defeated for good. 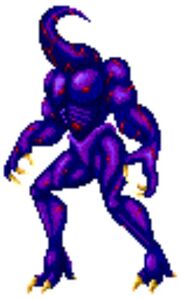 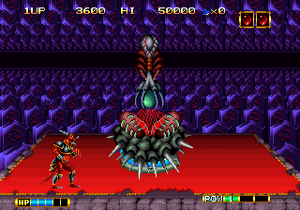 Retrieved from "https://villains.fandom.com/wiki/Az_Atorse?oldid=3524012"
Community content is available under CC-BY-SA unless otherwise noted.