Boss of the bosses

Magician
Azar Javed is a renegade human sorcerer of fire and one of the two main antagonists of videogame The Witcher. He is also the supreme leader of a criminal organisation Salamandra.

He was voiced by Stanley Townsend.

He was born in Zerrikania, an exotic land on the South. He studied magic in Sorcerer School in Ban Ard, but he never finished it. He had to be punished by his teacher for practicing forbidden magic, but he murdered them and escaped. Later he founded a criminal organisation Salamandra and recruited many people of human race. His life was full of overusing his fire magic, sexual lust and drugs.

He and his bandits invaded fortress of witchers Kaer Morhen. His bandits were cannon fodder merely to distract the witchers, so he could steal their secret recipes and schematics of mutation. After that he ordered his people to buy and capture children and hounds, so his alchemists could use them as experiment subjects of mutations. To gather resources for those experiments his people were producing and selling drugs, others took over few brothels, some of them were killers to hire.

Azar Javed killed a bandit, who had to be a crown witness by poisoning him by eggs of exotic flies. To use Geralt of Rivia to take a book of a long dead wizard, he disguised himself as a detective the witcher hired to find him, the detective was also murdered by Javed. Depending on player's choice the renegade wizard can get this book or not.

After Geralt of Rivia destroyed Javed's hideouts in Vizima, he found Azar in a cave. The wizard tried to advocate his actions, but the witcher was not convinced. The mage escaped leaving his people to deal with him.

He is finally found and killed by Geralt of Rivia in his labaratory on swamps. It is later discovered that Javed was not the brain of all of his operations, but he merely worked for Grand Master of Order of the Flaming Rose. 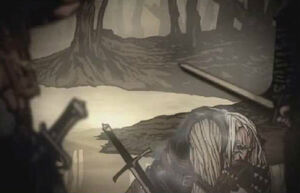 Azar Javed and the Professor defeat Geralt and leave him to die. 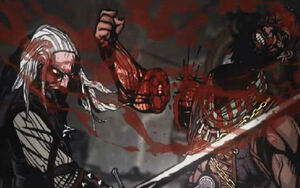 Geralt finally tracking down and killing the renegade mage.
Add a photo to this gallery

Retrieved from "https://villains.fandom.com/wiki/Azar_Javed?oldid=3906392"
Community content is available under CC-BY-SA unless otherwise noted.