Unknown (heavily implied to be something far more terrible than "Azathoth")

Creator and Master of the Universe

Listening to horrific music.
Creating the universe.
Warping all of reality.
Ruling the Outer Gods.
Being served by Nyarlathotep and having Nyarlathotep carry out all of his biddings.
Endlessly expanding and contracting.

Unknowable (as no organisms can understand it).

Azathoth, also known as the Blind Idiot God, the Daemon Sultan, and the Nuclear Chaos, is the ultimate antagonist in the Cthulhu Mythos, created by the late horror fantasy writer H. P. Lovecraft.

He first appeared in the 1922 unfinished short story ​Azathoth, in name only, before being mentioned and appearing in multiple other Lovecraft stories (most notably) The Dream-Quest of Unknown Kadath.

He is a cosmic and boundless deity of colossal proportion, and the great and all-powerful ruler of the Outer Gods. He is omnipotent beyond the power of the Great Old Ones, such as Cthulhu, and even his fellow Outer Gods, including Yog-Sothoth and Yibb-Tstll, and all other beings—and is the sole most powerful being in the entire mythos.

Azathoth is seen as the all-powerful creator of all of existence. All of reality is merely a part of Azathoth's dream, unknowingly created by itself. When, not if, Azathoth awakens, all things will end, once and for all, and all will once again be Azathoth.

According to Lovecraftian mythology, Azathoth is the omnipotent "Blind Idiot God" or "Nuclear Chaos". It is said to be stuck in an endless slumber, and is served upon by countless lesser deities that play a maddening tune on innumerable drums and flutes to keep Azathoth from awakening, for if the great "Daemon Sultan" should awaken, even for a few moments, all of existence is said to be doomed as it will signal the ultimate destruction of existence as we know it.

As well as its innumerable drummers, Azathoth is tended upon by horrendous dancers and is said to float in the very center of the universe in the centre of chaos itself (and hence "nuclear" may actually refer to its dwelling at the nucleus of the universe). No mortal has yet entered this realm and survived, and judging by the visions spoken of by H.P. Lovecraft and later writers, it is doubtful that any who did would wish to continue living, as Azathoth held the same insanity-inducing aura as the other Lovecraftian horrors, despite it being deep in slumber.

Azathoth is technically "God", and additionally the "Blind Idiot God" who is absolutely mindless and unconscious, but is not omnipotent and the most powerful being of all. He created all of existence as part of his dream, and is not even aware of it. Should he awaken, all of existence would be no more, and all would once again be Azathoth. He cannot be destroyed as the concept of destruction is merely his dream, and he exists beyond the concept of speed, strength, mortals, and the Outer Gods, as they are all merely part of his dream. Despite being mindless, Azathoth does have a will of his own and commands his messenger and avatar, Nyarlathotep. 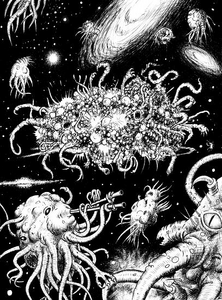 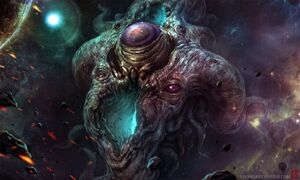 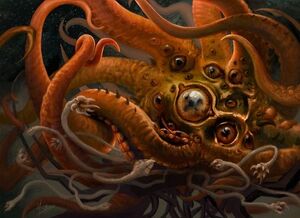 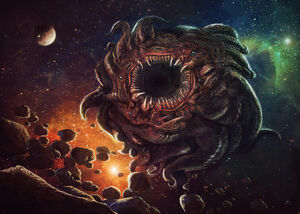 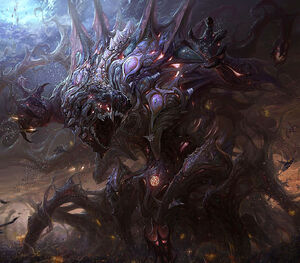 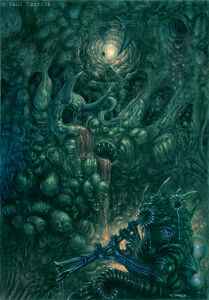 Azathoth being played Music by its fellow Outer Gods. 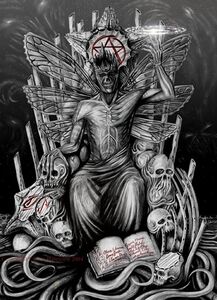 The Blind Idiot God aka Azathoth. 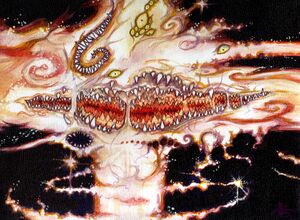 The Nuclear Chaos aka Azathoth. 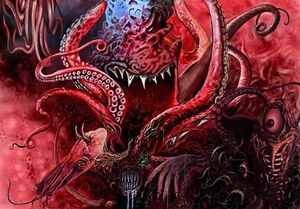 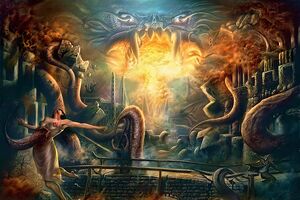 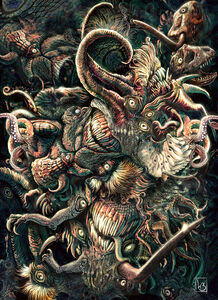 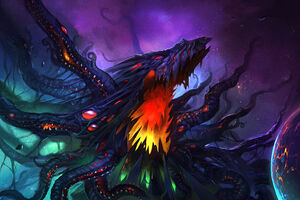 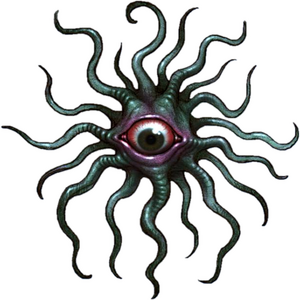 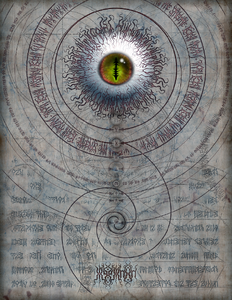 Retrieved from "https://villains.fandom.com/wiki/Azathoth?oldid=3346373"
Community content is available under CC-BY-SA unless otherwise noted.