Serving the Cult of Gozer.

Serve the Cult of Gozer and their god forever.

Azetlor is an antagonist and a boss character in Ghostbusters: The Video Game, and he is also a monstrous servant of Gozer that possesses a human named Edmund Hoover, a high-ranking member of the Gozer Worshippers. He resembles a giant bookworm with four long tongues that are his weak spots.

He appears in the form of a giant humanoid mass of Black Slime and broken furniture while in the stylized version he is a giant worm with 4 tongues. In the DS version, Azetlor manifests in the form of a bearded giant.

Azetlor, was a some kind of divinity worshiped by Sumerians around the same time when Gozer, the destruction deity was relevant. He was one of the most important and favorite of Gozer's creations praised of all Sumerian demideities, before Gozer himself was banished by his enemy Tiamat from the mortal world long ago.

According to his legend, Azetlor was a demigod that has said to have lorded over the lost (to some, the lost meaning the dead, but that is falae).

Azetlor's position in the Sumerian pagan pantheon as the "Keeper of Knowledge" was to find, collect and return what was lost, hence his new title "The Collector". He was entrusted with collecting anything that fell through between worlds, rather they be books, souls, relics, civilizations, etc. and ensuring they could eventually be returned to the world of the living in one new form or another. Yet, Azetlor developed an avaricious craving, and began to take and collecting things that had never been lost yet or not meant to become lost, and keep them all for himself, stepped out of his own role. He was cast to an abyssal other dimension by his superiors. It is there he waits for his freedom from his undesirable imprisonment one day in the future.

After his banishment, Azetlor tried to find his way back to the earth, but failed. During his time in exile, he was found by a race of extra-dimensional ghosts that inhabit the Abyss. Azetlor enslaved these "Animators" and lay the foundation for his escape.

Many thousands of years later, the psychopathic architect Ivo Shandor and his Gozer Worshippers were able to find Azetlor but unable to free him from his otherworldly prison. Shandor found a way to bind a part of Azetlor's essence to one of his most powerful cult leaders by the name of Edmund Hoover. Azetlor started to merge with his "chosen" host, allowing him to get foothold in the mortal world. When Edmund Hoover died, his soul became one with Azetlor, but without the the Gozerian Codex's mystical powers, he could not free himself from his prison.

In life, Edmund Hoover was once a powerful member in the Cult of Gozer. He was also a serial killer upholding Azetlor's "precious" title 'The Collector'. Hoover seduced and became engaged to Tillie Wooten, daughter and principle heir of late American oil mogul George S. Wooten, and Hoover succeeded, thereby gaining access to rare books in the Wooten Collection. Yet, the Collection was also sought after by a rival book collector. But on the other hand, Hoover soon jilted Wooten for a librarian.

Later in the year 1924, Hoover coax Eleanor Twitty, curator of the New York Public Library's Special Collections in an effort to gain access to the mysterious Gozerian Codex. They were engaged briefly. In March following that same year, when the head librarian Twitty had discovered her "husband" was hiding his true motives, she refused to allow him further access to the Special Collections. Hoover then murdered Twitty and hid her body in the secret chambers built by Shandor beneath the library's basement. Twitty was the fifth woman to go missing under mysterious circumstances in 1924. He also slain many others to cover up Twitty's death and collected their bodies like he collected books like his demonic possessor have ages past. The New York Police Department were unable to find the body of Eleanor Twitty despite a number of room-to-room searches of the book stacks, though they were able to charge Hoover with a number of other murders. At least 12 bodies of women were uncovered beneath the library in a search led by Detective Sergeant Ambrose Hannigan. Edmund Hoover was convicted for his crimes and sentenced to death by hanging before dawn on May 10, 1924. Before he was hanged, his last words were that he will return as Azetlor and guard all rare books in its collection.

As a reward for a lifetime of servitude to the Gozer Worshippers in the name of Gozer, Edmund Hoover was given "eternal" life as he was transformed into Azetlor. He ruled small corner of the Ghost World plane known as the Abyss, where he dwells in the now newly formed Gozerian configuration of the New York Public Library during his centuries-long exile. However, Hoover did not know that Azetlor’s true form was less grander than he thought it would be.

As Azetlor, Edmund Hoover had truly become a ‘bookworm’; an small, blue worm with four pink tentacles extending from its mouth and a squeaky voice. Ashamed of himself, he hid his true appearance underneath a giant mask and golem-like body. He is a giant humanoid mass of black slime, broken furniture with environmental debris. With the addition of his massive reserves of PK energy, made him a perilous enemy. But taking way his mask and fake body, he is nothing more than sniffling little worm that he really is.

Cruster and Crusto are just a few of the lucky Animators who escaped the rule of Azeltor and were able to cross over to Earth. After many years of hiding, this small group of Animators learned about a band of mortal humans called the Ghostbusters who victoriously survived the wrath of Gozer the Destructor. With help of the Library Ghost try to lure the Ghostbuster into their realm, both the animators ended up captured; but it was small sacrifice for them to get rid of the one who enslaved them and their fellow animators.

When Egon Spengler, Ray Stantz and the Rookie enter the Abyss with the Gozerian Codex, Azetlor became aware of it and that they had the Gozerian Codex and used his powers to open random portals to confuse the Ghostbusters and lead them to him so that he can take the Gozerian Codex form them. After Egon, Ray and the rookie found their way to Azetlor’s “temple”, Ray made a rude comment at Azetlor and calling him “twisted little bookworm”, not realizing that he made fun of Azetlor’s true appearance and taunting him by say “Hey Collector, we're taking your book, what you think about that!”. Azetlor appeared behind Ray, with his giant mask, completely pissed off and used his power to form his golem body to crushed the Ghostbusters. The Ghostbusters triumphed, claiming the Codex and returning to the earth. 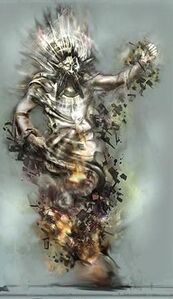 A twisted form of Edmund Hoover, a chosen vessel of Azetlor the Destroyer. 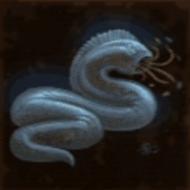 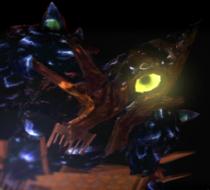