Remain as the queen of Oz.

Azkadelia, also known as "Az", "Azkadelia the Sorceress" and "Queen Azkadellia", is a powerful sorceress and the secondary antagonist of the miniseries Tin Man. It is later revealed that she is being possessed by The Wicked Witch.

Azkadellia is the sister of DG. She and DG were very close as children. One day, she and DG found and an ancient cave and when they went inside, they accidentally released the Wicked Witch along with the Mobats who soon transmormed themselves into tattoos on Azkadellia's chest. DG and Azkadellia hold hands which is the only thing that can protect them. But DG is scared away by the witch who then used her own dark powers and took over Azkadellia's body.

Azkadellia has been evil ever since that day. She eventually becomes the ruler of the O.Z. while her own father named Ahamo who was the king of the O.Z., remains in hiding and her mother named Lavender Eyes who is the benevolent empress of the Outer Zone itself was locked in a pocket dimension by her. During her reign, she even enslaved Raw's people known as the "Veiwers", a race of part-lion/part-human creatures with the special ability to see the future only through people's hearts instead of their minds.

The Wizard who is called the Mystic Man, was the former magnificent ruler of Central City who has been subjugated by Azkadellia through the influence of her magical vapors as if he was drugged and reduced to a stage act as a magician. He assists DG by directing her to locations which will stir her memories before his life essence was drained by Azkadellia. He said "I know what you are, witch" to the tyrannical queen as he see not just her but the evil that is controlling her.

After the Wizard's death and during their trek on to the Northern Island, the group learns that Glitch was once the advisor to the Queen of the O.Z. and that DG and Azkadellia are actually sisters and the daughters of the deposed Queen. DG remembers that Azkadellia killed her using dark magic when they were children, but their mother revived her by light magic and gave her secret instructions on how to find the Emerald of the Eclipse, which Azkadellia now seeks. Azkadellia confronts the group with her Longcoats and mobats, capturing DG and Raw. Cain fights the Longcoat captain Zero and learns that his wife and son, whom he thought Zero had killed, are still alive. Zero shoots Cain, sending him falling into a lake of ice.

Glitch rescues and revives Cain, and they journey to Azkadellia's castle to rescue DG. Azkadellia interrogates DG, learning that the Emerald of the Eclipse, the greatest treasure in all of the O.Z., is protected by the "Gray Gale". The Mystic Man is killed by Azkadellia after advising DG to head south. DG is freed by a small dog who is revealed to be a shapeshifter named Tutor, her childhood teacher who is also nicknamed Toto. DG, Glitch, Raw, and Cain head south with Tutor, not knowing that he is marking their path for Azkadellia's Mobats to follow. Along the way DG rediscovers some of her magical abilities—restoring a withered fruit tree in the fields of the Papay—and Cain discovers his wife's grave. More of DG's memories return in the lake country of Finaqua with the name in the OZ's Ancient langauge means "magic water" where it all began with Azkadellia's path to evil and her rise to power.

The party heads farther south in search of DG's father Ahamo. Tutor's treachery is discovered but he is allowed to stay with the group in his canine form. In the Realm of the Unwanted where criminals and outcasts resides, they are led into a trap: Glitch, Raw, and Cain are captured by Zero, but are freed by resistance fighters led by Cain's son Jeb was alive the whole time. Zero reveals the scope of Azkadellia's plan, which is to use the Emerald of the Eclipse in combination with a machine called the "Anti-Sun Seeder" to lock the O.Z.'s two suns in place behind the moon during the upcoming Double Eclipse, covering the land in permanent darkness. The Anti-Sun Seeder was originally a Sun Seeder which was a sunflower-producing device built for agricultural puposes, had been designed by Glitch during his time as the Queen's advisor, and the removed portion of his brain is being used to control it.

Meanwhile, DG meets Ahamo and the two travel by a hot air balloon to the hidden mausoleum of the O.Z.'s royal line. DG learns that the Gray Gale itself was named after the figure who actually is Dorothy Gale, her "greatest great-grandmother" and "the first slipper" to travel to the O.Z. from Earth. She enters Dorothy's tomb, finding herself in a black-and-white representation of her Kansas farm and receiving the Emerald from Dorothy. Azkadellia arrives, capturing both Ahamo and the Emerald and leaving DG trapped in a sarcophagus within the Grey Gale.

DG escapes using magic and is reunited with her friends, and together they infiltrate Azkadellia's fortress as she locks the suns in place. DG clasps hands with Azkadellia, freeing her from the witch's possession just as her companions reverse the Anti-Sun Seeder's pulse, destroying the witch in the process as she melts. In the ending of the series, Azkadellia is saved by DG who separates her from the Witch. Azkadelllia is now restored to her old self again. 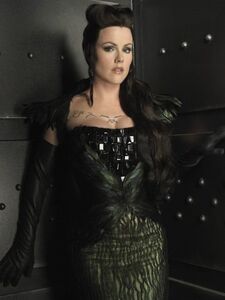 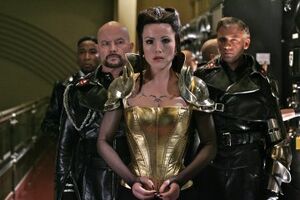 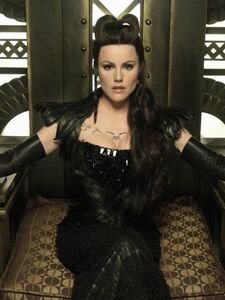 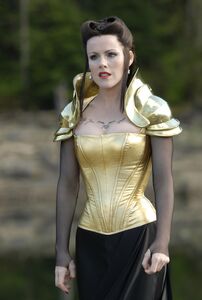 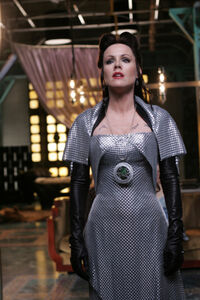 Azkadellia with the fabled Emerald of the Eclipse in her possession.

Azkadellia used her magic to suck away the life force of her victims.